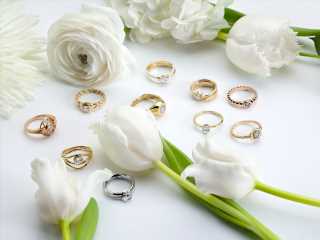 As wedding and engagements continue to be held in virtual formats, De Beers has decided to capitalize on the moment with a new line of “commitment” rings to be sold exclusively online.

De Beers’ new Ten/ten collection — a line of 10 ring styles, designed by independent jewelers — has launched today on Blue Nile, which is among the U.S.’s highest volume jewelry e-commerce destinations. De Beers says the collection was devised to raise awareness for both the sustainable mining efforts in Botswana as well as a roster of independent designers who have, inevitably, struggled during the pandemic.

Each of the rings incorporates diamonds that De Beers says were responsibly sourced in Botswana, and are priced from $3,000 to $4,500. Designers were encouraged to apply their own sensibilities to the project, using a range of metals and materials including 18-karat gold, platinum, mother-of-pearl and enamel. Each of the designs have only been produced in quantities of 10, with the aim to make them an exciting, limited-edition product for consumers.

Stephen Lussier, chairman of De Beers Jewelers, said of the collection and its digital launch: “With their significant reach and leadership position in the online bridal space, Blue Nile is the ideal retail partner for Ten/ten. Together, we created a very dynamic program that has allowed a broad world of consumers to discover some of the most innovative jewelry designers working today by offering them something fresh and exciting in the engagement ring category.”

Throughout the next month, De Beers and Blue Nile will embark on a comprehensive social media strategy to promote the collection and the independent designers’ work, including round table discussions broadcast on Instagram’s IGTV.