Two months after retiring from rugby, celebrated former Wallaby David Pocock has taken his first formal role in climate activism by joining the board of an anti-fossil fuel activist group, the Lock the Gate alliance.

The appointment will spur conjecture Mr Pocock is eyeing a future political career – which he did not rule out but said he needed more life experience first.

David Pocock, during a recental national bird count. The former rugby star also has eye on climate change, and has joined the board of the Lock the Gate alliance.Credit:Elesa Kurtz/ACM

Mr Pocock joins Lock the Gate six years after it led a protest against the controversial Maules Creek coal mine in northern NSW at which he was arrested for chaining himself to a digger.

"I've admired their work for years, with their focus on grassroots efforts to stop inappropriate coal and gas," Mr Pocock told The Sun-Herald, noting the owner of that mine, Whitehaven, has lately pleaded guilty to 19 breaches of mining laws that resulted in damage to the environment.

Simon Clough, chair of Lock the Gate's national board, said the group was delighted to appoint Mr Pocock given his passion for sustainable agriculture.

"Much of Australia’s farmland and environment is under threat from coal and gas exploitation," Mr Clough said. "We have invited David to join the board of directors due to his tenacity for helping protect these special places."

Special places for Mr Pocock also include the land of his birth, Zimbabwe, where he has recently set up the Rangelands Restoration Trust . That organisation aims to help reverse land degradation in a semi-arid region with some of the poorest communities anywhere in the world.

"Rainfall is unreliable at the best of times, and then you throw in climate change," Mr Pocock said, drawing a contrast with Australian farmers for those already "on the brink."

"You don't have the same resources to be able to deal with climate, in the way that Australia can, to mobilise capital to help farmers and communities that are being hurt," he said. "Over there it's a different story."

Still, the tale is not without its echoes in Australia, as Mr Pocock found during a visit last week to farmers in south-west Queensland who are still battling drought even as coastal counterparts copped a deluge. 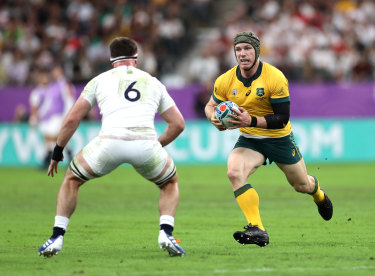 David Pocock in one of his final matches for the Wallabies, when Australia took on England during the Rugby World Cup 2019 in Japan.Credit:Getty

Regenerative farming practices that restore productivity and also renewable energy offer ways forward for rural communities rather than mining of fossil fuels and other resources, he says.

"We've done a terrible job in selling the good part of the story in how much regional Australia can benefit from renewables, how we can actually transition the economy, and become world leaders in this space," Mr Pocock said.

"The sad reality is that Australia is certainly not a leader on climate change but we are front of the pack when it comes to extinction," he says, noting the demise of dozens of marsupial species. "We have a pretty sorry record in that regard."

"I think future generations will judge us pretty harshly if we don't make some changes and find a way to meet our needs without destroying the non-human world here."

Mr Pocock is also co-founder with his wife Emma of FrontRunners, an organisation aimed at working with athletes to tackle climate and environmental issues.

On the inevitable question of whether he might run for political office, Mr Pocock said: "I do think politics is incredibly important [but] you can be involved in politics and not be a politician."

He noted there were thousands of students active in campaigns such as School Strike 4 Climate even before they can vote. "At this stage I think I need a bit more life experience before I can contribute in a meaningful way."