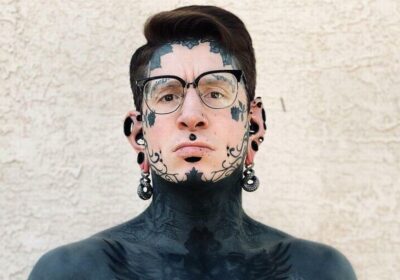 A dad who has a love for tattoos has stunned fans with a rare snap with his inked wife.

Remy first hit headlines when he revealed he spent around £75,000 on his procedures since he begun in 2009.

The chef, from Canada, is open about his journey as he's racked up a following of 197,000 fans on Instagram.

READ MORE: Extreme tattoo fan who spent £75k on ink says inside bum was most painful

Now while he's vocal about his own tattoo obsession, he often keeps his family out of the spotlight.

Although he recently uploaded a snap with his son, Remy decided to share an adorable image with his wife.

Posting to his followers on Sunday, the dad gushed: "Just me and my better half.

"They say behind every 'great man' is a 'great woman' well that's certainly been the case for me.

"It took some time to find, but true love has made it's mark on me."

The photo shows Remy holding his wife tight as the couple flaunt their tattooed bodies.

While his wife isn't as inked as him, she is sporting a sleeve in the loving photo of the pair.

It is the only tattoo she has on show, although if you look closely you can see a design on her neck area too.

Since Remy shared the upload, the post garnered thousands of likes and comments.

One fan asked: "Is that a new sleeve on your wife?!"

Another follower gushed: "That is a sweet shot bro," while a third commented: "So beautiful and sweet shot."

And a fourth chimed in: "Such a cute picture."

Remy previously told Daily Star how he was planning an epic tattoo.

He said: "The blackwork I'm doing has pretty much never been seen before."