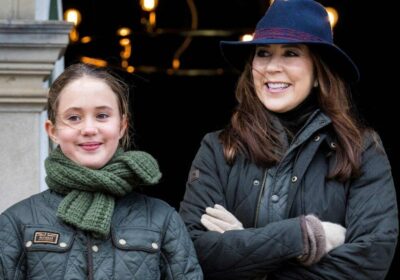 Crown Princess Mary of Denmark, 50, and her daughter Princess Josephine, 11, attended the yearly Hubertus Hunt at The Woodland Park ‘Dyrehaven’ on November 6 in Klampenborg, Denmark. The hunt has been held since 1900, something which is reserved for the royals.

The park is a 1,100-hectare area and is a UNESCO World Heritage site near Copenhagen.

At one point, Princess Josephine breached protocol and could be seen on her mobile phone while her mother was waving at the crowds. She tried to discreetly put the phone away and then joined in the waving alongside Crown Princess Mary.

She said: “Princess Josephine might have tried to make this look like a spontaneous teenage moment, but there are clues from her body language to suggest she is playing to the crowd and loving the comedy of the moment.

“Her sucked-in lips suggest she is feeling a little bit guilty about having her phone ring while she is on the balcony and she turns her back in a gesture of kind-of-politeness to take the call.

“But then she holds the phone to her ear as she faces the crowds and we get some waves before she looks at the screen to pull a face as though signalling she shouldn’t be using the phone while she is on royal duties.”

According to the expert, Princess Josephine acts like she has a “popular fan base” with the Danish crowds.

Judi reiterated: “That face-pulling looks aimed at amusing the crowds and it seems to suggest she has a popular fan base that loves to see her being a bit naughty and relatable.

“Crown Princess Mary looks oblivious here as she chats, although most mothers have a very wide peripheral vision when it comes to their children.

“So she probably was aware of some of the actions and therefore either pretty cool with it or saving the telling-off until later.”

Kate Middleton’s parenting was widely analysed during the Platinum Jubilee Pageant earlier this year, when her four-year-old son Prince Louis began acting up, pulling faces and even putting his hand over his mother’s mouth at one point.

Judi suggested that Crown Princess Mary does not “share a similar approach” to Kate in this instance.

She explained: “Does Mary share a similar ‘leave it rather than accelerate it in public’ approach as Kate seems to have with Louis?

“Prince Louis was just being a pretty normal small child when he was pulling faces during the Jubilee and was pulling them at his mother rather than the crowd.

“Josephine is older and seems to have something of a friendship bonding with the crowds that should appeal to fans of her own age.”

She said: “These two are known to have great people skills and work ethics, having had regular lives and jobs before they took on royal duties. They are women and mothers who easily relate and are able to identify with ordinary people and respect people regardless of their status. This is demonstrated in the issues and organisations for which they are patrons for.

“As parents and mothers, both Kate and Mary have this lovely aspect in common. They liberally display affection and connection towards their children. More intriguing is Mary whose children are in their teens (when children tend to pull away from their parents) and you can still see and feel her display of affection, connection and closeness in pictures that have been captured in public – not posed and prepared pictures.

“Both Kate and Mary seem to always prove they are mothers first before any other royal duties. To be honest, this is a very endearing and influential quality – you can trust a woman who has a good connection with her children.