Crossbench to ‘run a ruler over’ Labor’s pandemic bill proposal

Negotiations on Victoria’s new pandemic bill will pick up pace after a high-level meeting between the government and crossbench MPs on Thursday evening and a passionate plea from health unions to resolve the debate.

Independents Rod Barton and Clifford Hayes sat down with Attorney-General Jaclyn Symes for the first time since the MPs, previously cut out of consultations on the bill, listed their demands to end a deadlock in the upper house. 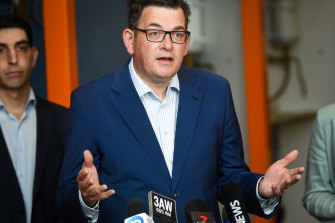 Thursday afternoon’s in-person meeting, the first with those MPs since the dramatic events of last week, was not expected to immediately resolve their concerns.

“We’re not blinking,” Mr Barton said. “At the end of the day, this isn’t our problem. This wasn’t of our making, this is fair and square the government’s stuff up.”

Mr Barton and Mr Hayes are expected to spend coming days reflecting on the government’s response to their demands and “run a ruler over” Labor’s proposal.

The government needs to secure the support of one extra MP in the upper house to pass its legislation next week, the final sitting week before the existing state of emergency powers expire on December 15.

The government last week delayed debate on the bill after the surprise reappearance of ex-minister Adem Somyurek, who vowed to tip the vote against his former party.

Labor now intends to debate the pandemic bill first when the upper house sits next week, according to a notice circulated to the Legislative Council.

The proposed Public Health and Wellbeing Amendment (Pandemic Management) Bill 2021 would instead empower the premier and the health minister of the day to declare a pandemic and issue such health orders.

As the government continued its belated negotiations, unions representing almost 110,000 health workers on Thursday made a public plea with the crossbench to ensure some framework exists come December 16.

Addressing members of the upper house who complained of being initially excluded in the drafting of the bill, Mr Hill was unmoved.

“Cry me a river. We have a pandemic on at the moment, and we desperately need your help and assistance.”

Lisa Fitzpatrick, the Victorian secretary of the Australian Nursing and Midwifery Federation, who accused some parliamentarians of “playing sport” with peoples lives, said she had discussed the bill with two of the crossbenchers.

“There are some that haven’t returned my call or my text.”

Mr Barton confirmed he had spoken with both unions, who mounted “a very strong argument” supporting the draft legislation.

Jeff Bourman from the Shooters, Fishers and Farmers Party, which has been highly critical of the government’s handling of the pandemic bill and refused a last-minute approach from Labor, said he had been contacted by Ms Symes and the office of Mr Foley on Thursday.

“Whilst I am not negotiating, I do appreciate them checking in,” Mr Bourman said on Twitter.

On Saturday, more than 10,000 people rallied against vaccine mandates and the pandemic bill following intense debate and criticism of crossbench MPs working with the government.

Mr Barton, from the Transport Matters Party, and Mr Hayes, from Sustainable Australia, want improved oversight of the proposed regime, including the establishment of a joint parliamentary committee with a non-government chair and majority to scrutinise government decisions during a pandemic.

They want to give the Ombudsman jurisdiction to review pandemic decisions and judicial appeal rights to anyone detained by a pandemic order. They will ask for a sunset clause and a disallowance provision that would enable either house of parliament to scrap a pandemic declaration or order.

Another request from Mr Barton and Mr Hayes is to provide certainty on when vaccine certificates in settings such as retail and restaurants could be wound back, now that the state has fully vaccinated 90 per cent of people over 12.

Premier Daniel Andrews on Thursday said it was too early to provide a date for those settings to lift.

“We want to be able to provide that timeline, but it’s got to be based on health advice,” Mr Andrews said on Thursday.

The government had already secured what it believed to be a working majority in the upper house to support the bill, having worked closely with Reason Party MP Fiona Patten, Andy Meddick from the Animal Justice Party, and Greens leader Samantha Ratnam.

That was scuppered by the return to parliament last week of Mr Somyurek, who vowed to tip the vote against his former party.

Shadow treasurer David Davis, leader of the opposition in the upper house, said the business community should be more closely consulted on the proposal but ultimately hoped the crossbench would block the bill.

“It’s clear that this is another favoured group of crossbenchers. I hope they hold strong, and I hope they say no.”

The opposition has vowed to repeal the law if elected next year following broad criticism about a lack of consultation, independent oversight or review rights.

Although Roderick McRae, Victorian president of the Australian Medical Association, believed pandemics deserved specific legislation, he said debate over who should issue health orders were irrelevant so long as they could be enforced quickly “like a guillotine”.

“We have to act. We can’t have a situation where we sit back and form a committee, contemplate what’s the right thing to do, should we retaliate, and then review, and review, in the setting of a pandemic.”