More than 1000 Afghans with Australian visas remain stuck in Kabul after credible threats of suicide bombers and other terrorist attacks appeared to close their last window for escape.

Australia, Britain and the United States all updated their travel advice on Thursday morning, warning people not to attempt the dangerous journey to the airport in Afghanistan’s capital. 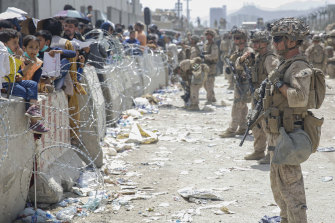 US troops line the airport perimeter at Hamid Karzai International Airport in Kabul earlier this week.Credit:US Marine Corps via AP

It has left some 1000 Afghans with Australian visas trapped in Kabul with no way to get out before the August 31 deadline for evacuations set by the Taliban, which swept back into power last week as international forces withdrew.

Foreign Minister Marise Payne said the travel advice was changed because there were “credible threats” of a terrorist attack around the airport.

“Our clear travel advice is now, do not travel to Hamid Karzai International Airport and if you are in the area of the airport, move to a safe location and await further advice,” Senator Payne said.

“Afghanistan remains highly volatile and dangerous. Be aware of the potential for violence and security threats with large crowds. There is an ongoing and very high threat of a terrorist attack.”

The Sydney Morning Herald and The Age spoke to three Sydney men on Thursday who feared for the safety of their wives and children who had been struggling to get into the airport.

One of the men said his wife had managed to get inside the airport for her flight but had been separated from their children who were outside. He said his son had been emailed a visa but could not open it outside the airport because of a poor internet connection.

“My wife is crying and my kids are crying,” he said.

Another Sydney man said his wife and young child were stuck outside the airport and had received a letter warning them to stay away from the airport on Thursday because of the heightened security risk. He said his wife’s partner visa application was still being processed after being lodged more than four years ago.

“Sending people home is not safe,” he said. “The government is acting too slow. It is not enough. My family is in tears and crying and my wife doesn’t know what to do. She is saying ‘I would rather die than see my kid die here’.

“It is a horrible, horrible situation. They were standing all day in the canal in dirty water and the Australians came and were only picking people with Australian passports.”

A third man anxiously waiting for his wife and child to get to Australia said the Taliban had struck his wife and his brother with sticks at the airport on Wednesday.

“They pushed them off and said you have to leave otherwise we are going to do worse than this,” he said.

Assistant Defence Minister Andrew Hastie said the situation around the airport had significantly deteriorated and there was now a “high” risk of a suicide bomb attack outside it.

Even before the updated advice on the terrorist threat, Afghans with Australian visas were finding it increasingly difficult to get into the airport in recent days, with the crowds becoming more violent and soldiers manning the perimeter appearing to favour those with foreign passports.

But another 1200 people were evacuated on six Australian flights and one New Zealand flight on Wednesday night, taking the total rescued by Australian authorities over 4000 in eight days.

Prime Minister Scott Morrison said on Thursday the rescue operations remained in place “but the situation is deteriorating”.

Emotions spilled over in Federal Parliament on Thursday over the plight of Afghans left behind, with Labor MP Julian Hill kicked out of the chamber after accusing the government of “killing my constituents”.

Mr Hill, who represents the most Afghan-Australians of any federal MP, yelled across the chamber at Home Affairs Minister Karen Andrews: “There are thousands of Australians and their loved ones who are only in Afghanistan because you haven’t processed their visas for years and now you are leaving them to die.”

Speaker Tony Smith then officially “named” Mr Hill and the government successfully moved to suspend him from Parliament for 24 hours.