It started with names drawn from a hat. Photographer Shannyn Higgins randomly paired 25 writers and 25 visual artists as the starting point for an exhibition that combines art and language as part of this year’s Melbourne Writers Festival. Duality’s subjects include Courtney Barnett, Chloe Hooper, Judith Lucy, Beci Orpin and Oslo Davis in a project that festival director Marieke Hardy calls ‘‘a creative blind date’’.
Higgins asked each writer to submit a brief unpublished scribble or phrase. She then hand-delivered these words to the artists in a wax-sealed envelope, along with a blank archival sheet on which to draw or paint, using the writer’s words as a starting point. Not until the exhibition’s opening party will writer and artist find out who they were paired with and what their random collaboration produced. 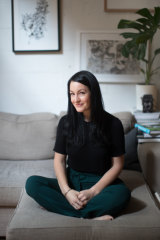 Photographer Shannyn Higgins picked names out of a hat to decide the creative pairings behind Duality. Credit:Simon Schluter

‘‘Most of the time at an art show everyone sticks to themselves, but at this everyone’s trying to find their writer and artist,’’ says Higgins, who has staged Duality twice before, in Vancouver in 2014 and Melbourne in 2015.
‘‘Everyone’s running around getting photos together and saying ‘This is my artist!’, ‘This is my writer!’, it’s really beautiful.’’
The exhibition also includes Higgins’ portraits of her 50 subjects at home and unvarnished.
‘‘I wanted to do a shoot that reflects the space they’re in even if it’s crappy light and challenging conditions as opposed to studios where everything’s perfectly white and styled,’’ she says. ‘‘I’m just trying to replicate their authentic lives, be it messy sharehouses with people’s stuff everywhere or them with holes in their socks.’’
Higgins has had no formal training and didn’t launch her photography career until her early 30s, after six years spent crewing boats around Europe and the Caribbean. She finally put down roots in Canada, and in 2009 moved to Vancouver, working in a bar to pay the rent and spending the rest of her time behind a camera.
‘‘Photography was something I wanted to do for a very long time but I never had the courage to do it,’’ she says. In Vancouver, she found an arts community that was close-knit and supportive. She also lived with a musician and worked out of a recording studio, so was surrounded by creatives who became her earliest subjects. These shoots helped plant the seed for Duality.
‘‘I was working with a muso one day and they had the words to describe their experience as creatives and the next day I was working with an artist who had a visual language but they were essentially saying the same thing and the idea started to meld at that point,’’ Higgins says.
She recalls ducking into a bookstore during a Vancouver snowstorm and the word ‘‘duality’’ popping out of a magazine article. Within three months she had staged the first Duality in Vancouver. The exhibition opening also became a farewell party for Higgins, who returned to Melbourne shortly afterwards.
Hardy, who took part in Duality’s first local incarnation in 2015, says the project suits the festival’s new direction ‘‘as we celebrate unique ways of telling human stories’’.
‘‘I love the marriage of words and visuals,’’ she says. ‘‘It’s slightly terrifying to hand your words over to a ‘stranger’, so to speak … a creative blind date … but I trusted Shannyn implicitly and the care she has for her artists runs all through the project.’’

Higgins has funded Duality entirely herself and takes no profit from the project. In her search for ‘‘a genuine sample of Melbourne’’, she has chosen subjects of various ages, races, physical abilities, genders and sexualities. 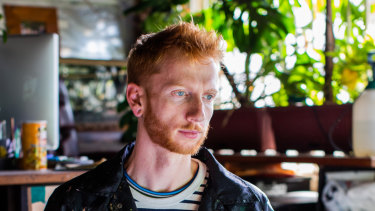 Reflecting on his Duality experience, New Zealand-born artist and muralist Jason Parker said riffing off someone else’s words was a pleasurable challenge.
‘‘You have to push yourself out of your comfort zone; I was able to filter it down to my usual style and content that I paint but that launching-off point was quite different and I really enjoyed that aspect of it,’’ he says.
There’s a ripple effect to the project, too. Everyone who participates gets exposure, both to the public and to the other artists involved.
‘‘Even though the arts community is huge in this country, we’re quite segregated,’’ says comedian Judith Lucy, who provided a scribble for Duality and was photographed working on her laptop in bed, in her pyjamas. 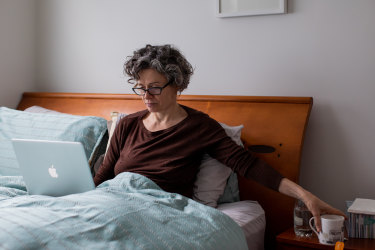 Judith Lucy in PJs for the Duality project.Credit:Shannyn Higgins

‘‘I know a lot of comedians but I don’t know many full-time writers, musicians or artists. I think anything that brings the different elements together is great to be involved in,’’ she says. ‘‘And let’s be honest, I’m also really looking forward to the party.’’
Duality is at KSR Art Bar, Rialto Towers, 525 Collins Street, city, August 30 to September 8; dualityexperiment.com