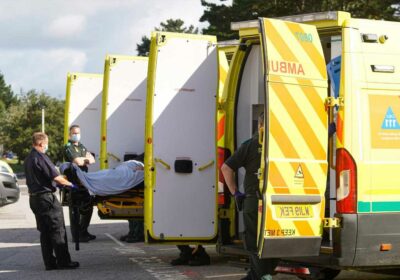 HOSPITALISATIONS are at the lowest level they have been in months despite fears they could reach several thousand by now.

An average of 840 people are being admitted to UK hospitals per day, and there are 7,800 people in hospital now. 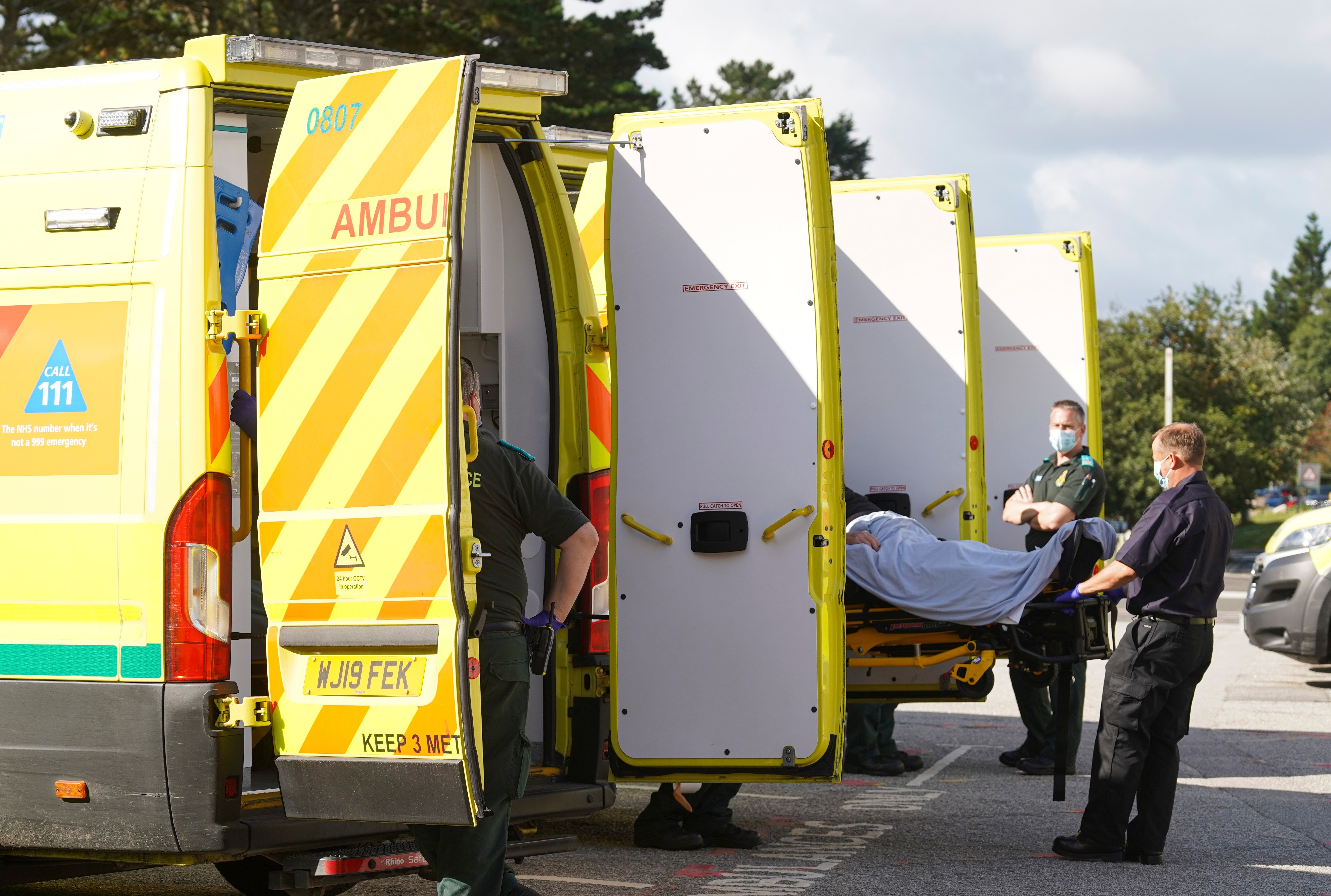 Although the numbers are higher than ideal, they are nowhere near what was forecast by scientific advisers to the Government on the expert panel Sage.

It suggests Britain is over the worst of the outbreak – as experts say they are optimistic about trends.

Sage had modelled that with a variant as infectious as Delta, which is dominant in the UK, hospitalisations would grow larger than the first wave.

Warwick scientists predicted that easing lockdown on June 21 (which did not happen until July 19) could cause daily hospital admissions in England to reach 10,000 in a worst case, peaking late August.

The actual figure for England hovered around 700-800 in late August, and has remained flat, possibly because ministers decided to wait and vaccinate more people between June 21 and July 19.

But updated modelling dated September 8 said there is still “the potential for another large wave of hospitalisations” as the coronavirus pandemic continues.

England’s daily admissions could reach off the scale levels of some 7,000, should the R rate reach 2.

The R rate is currently 0.9 to 1.1, and, continuing at the current trajectory, admissions could double to 2,000 per day by mid-October, according to Sage.

Actual admissions are more than half this level now, at 840 in the UK and 670 in England. 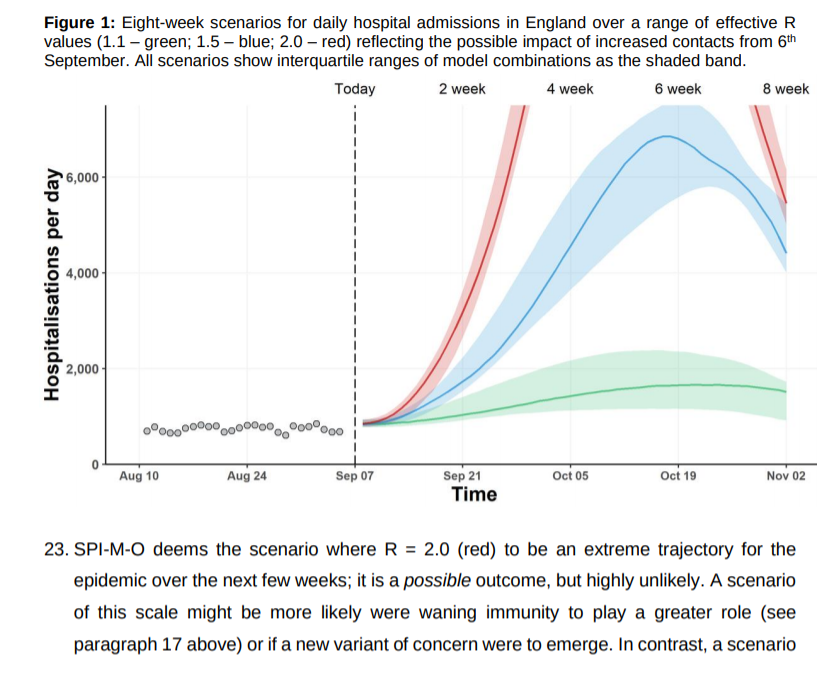 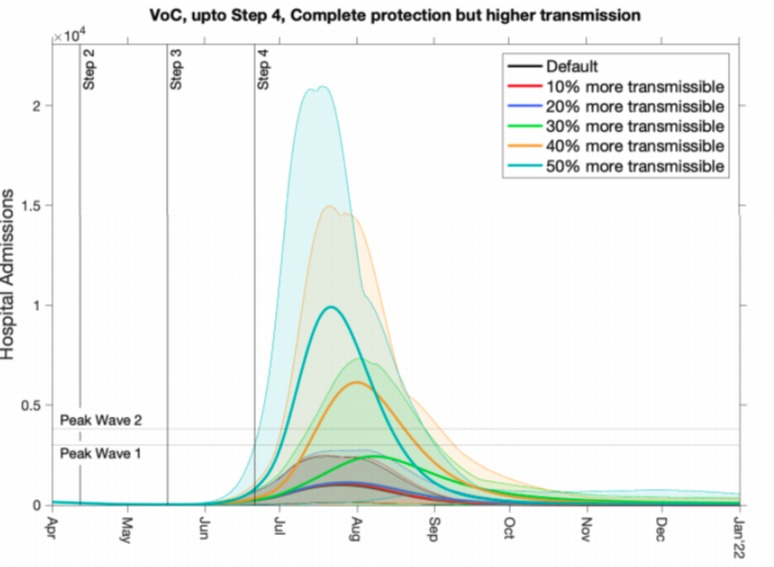 Sage has been previously criticised for taking the pessimistic view of the outbreak’s trajectory, writing up papers with devastatingly high figures.

Rarely have these “worst case scenarios” – or even the more realistic ones – played out.

They are used as an indicator for how severe the situation could become in order to guide the Prime Minister’s policy making on Covid rules.

Concerns had been based on schools and offices returning from early September, with some experts warning of “quite a large wave” in the weeks following.

Although a huge surge has been seen in Scotland, the same cannot be said for the other home nations.

In fact, the number of people testing positive for Covid in England has dropped to its lowest level since the end of June.

Almost 162,000 people tested positive in the week to September 15, down 22 per cent on the previous week, according to Test and Trace figures.

However, it may be a while before the impact of the start of school autumn term and more mixing in workplaces is seen in the data.

The positive test rate hit a record high in primary school children, with 484 cases per 100,000 people.

This could soon seep into older populations and drive up case figures – although vaccination rates will help suppress spread compared to previous waves.

It comes after Prof Neil Ferguson, member of SAGE and Imperial College London virus expert, said the back-to-school surge has not happened yet and he is “moderately optimistic”.

He said: “We can’t rule out some need for additional measures, but I very much doubt we will need to go back into lockdown again.”

The Covid Symptom Study also found cases fell for a third week, to 45,000 per day, and Professor Tim Spector said: “Another week of declining cases is positive news.”

But he pointed out that infections in children are rising now that they are back to school, even if they’re falling in adults.

Prof Spector said: “As predicted, the return to school has led to climbing cases in the young.

“While it’s true that Covid in children is mostly mild, the real issue is their ability to pass on the virus to those who are most vulnerable.

“ZOE COVID Study data shows protection waning in those who were first in line for a vaccine, and so their risk of getting infected is rising.”

A booster campaign reaching the most vulnerable groups is now underway as part of the Government’s plan to prevent a winter crisis.