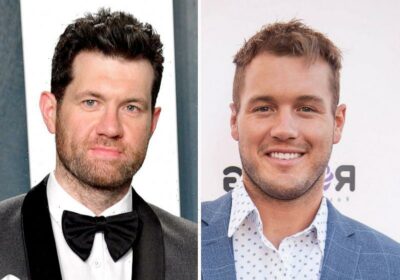 Former “Bachelor” star Colton Underwood is fully embracing his sexuality since coming out as gay earlier this week to Robin Roberts in an exclusive interview on “Good Morning America.”

Since Underwood’s announcement, a clip from his season of “The Bachelor,” one in which Billy Eichner appeared as a guest, has resurfaced and gone viral on social media.

In the clip, which Eichner reposted to his Instagram on Wednesday, the “Billy on the Street” host” jokes, “I’m gay. I know that’s a shock, Colton. And that, I think, you should look into. Maybe you’re the first gay Bachelor and we don’t even know!”

The 42-year-old comedian added in the caption, “Congrats @coltonunderwood. If you’re gay, be gay! I’ve been gay forever and I love it!”

And, it seems, Underwood loves it too. In the comments, the 29-year-old said, “Love you. Love this (now) and now I love being gay.”

Eichner responded, “I’m happy for you. See you at the club, Colton!”

“I’m still nervous, but yeah,” he continued. “It’s been a journey for sure.”