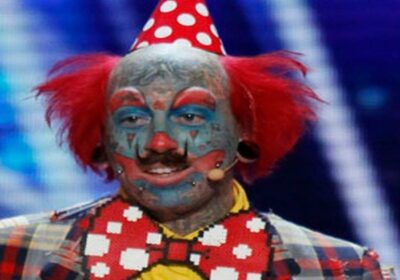 A body modification fanatic who altered his appearance to look like a clown has opened up about his excruciatingly painful split tongue surgery that left him unable to eat or talk for a week.

Richard Esposito – known as Richie the Barber – worked as a barber before embarking on a mission to turn himself into a clown by getting his face tattooed and receiving various body modifications.

Shortly after starting his professional career as a clown, Richie even appeared on America's Got Talent, frightening Simon Cowell with his extreme persona.

Since starting his quest, the punk-loving clown has also learnt to unicycle and juggle and recently opened up to the No Jumper podcast about his passion.

While speaking on the podcast, Richie shared stories about his body modifications and admitted that his split tongue had been one of his most painful.

“It sucked, you can’t talk or speak for a week, and you can’t eat anything,” he confessed.

Richie then went into detail about how the painful procedure took place, describing how his friend had performed the surgery for him.

He recalled: “You’ve got to separate and pull it apart.” Despite the initial pain, Richie claimed that the body modification had been worth the stress, and suggested that women “love” the novel feature.

In his pursuit to emulate his goofy idols, the 36 year-old also went to the extreme step of getting bumps inserted into his eyebrows.

While this has helped him to resemble the permanently-surprised expression of the cartoonish characters, Richie revealed that the surgery hadn't felt like a smart move at the time.

“That was bad, that was the craziest [thing] I’ve ever done to myself,” he confessed.

“It was nuts, like night terrors, because I wasn’t put under… I had PTSD, so I wake up screaming, freaking out like they’re still working on me.”

After injecting “20 shots” of anaesthetic into his forehead, Richie remembered that the surgeons had made an incision before adding the bumps into his eyebrows.

“Have you ever been hit by a baseball bat in the head?” he asked. “It was like that, getting hit with a baseball bat… I love it though, it’s like clown eyebrows.”

To get more lifestyle stories from Daily Star delivered straight to your inbox sign up to one of our free newsletters here.