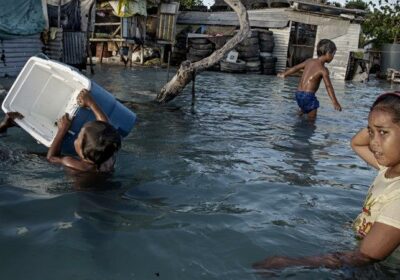 He said climate risk had become a “threat generator” rather than a “threat multiplier”, and was a “blind spot” in Australian security planning. 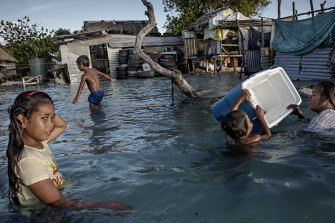 In Kiribati large parts of the village Eita have already been flooded.Credit:Getty

Dr Glasser, director of the Australian Strategic Policy Institute’s climate centre, says sea level rise is occurring four times faster on the equator than anywhere else in the world and will leave up to 400 million people subject to what was once estimated to be one-in-100-year flooding every year within the forseeable future.

He said while Australians appeared to have an increasing understanding of how climate change might affect them through floods or fire domestically, the regional threat was not yet properly considered.

Australia not only faces the threat of mass displacement in its region, but also the potential for warfare over access to water and a decline in influence in the region through its failure to properly address the security implications of climate change, according to a report by the Climate Council co-authored by Cheryl Durrant, who spent 30 years working at the Australian
Defence Department, most recently as the Head of Defence Preparedness.

According to the report, Rising To The Challenge: Addressing Climate And Security In Our Region, Australia has fallen behind the US, Britain, Japan and New Zealand in its analysis of the climate security threat, and climate change remains on the margins of Australia’s defence, foreign affairs and trade strategies.

Citing a speech by United States Secretary of Defence Lloyd J Austin in April in which he called climate change an “existential threat” Ms Durrant said it was clear the United States was “politely” calling for Australia to increase its efforts in the area but had not yet been heard.

“The US is already asking it to step up … to show greater leadership and ambition.”

She said it was “bizarre” that Australia was willing to commit to combat in Iraq and Afghanistan in support of the US alliance, but not take greater action on climate change.

In his speech, Mr Austin, a retired four-star general, said, “We face all kinds of threats in our line of work, but few of them truly deserve to be called existential. The climate crisis does.”

Ms Durrant said she expected the security threat of climate change would be raised at this week’s talks between Australian foreign and defence ministers and their American counterparts.

Former US deputy undersecretary of defence Sherri Goodman, who contributed to the report, said it was “not too late for responsible action by Australian leaders”.

She said Australia not only had to protect its homeland security but was “a vital American partner in the region and globally”.

“It needs to be able to help address climate risk throughout the region.”

She said this would mean not only increasing its efforts to reduce carbon emissions, but also ramping up its analysis of climate security threats.