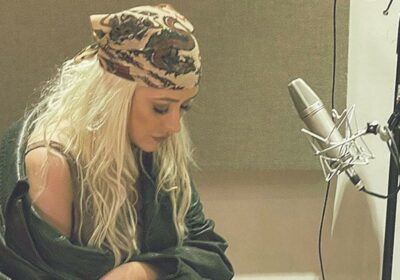 “I’m approaching music as a grown ass woman who has had a lifetime of experience,” says Aguilera, speaking about her upcoming English and Spanish albums.

Like many of us over the past year in lockdown, Christina Aguilera has been doing a lot of self-reflection — and pouring her findings into her new music.

In 2018, the pop diva dropped her eighth studio album “Liberation,” a more R&B and hip-hop tinged effort featuring collaborations with Demi Lovato, Kanye West, Ty Dolla Sign and 2 Chainz. In the time since, she’s been teasing studio sessions all over social media and previously confirmed she has not one, but two new albums in the works — one in English and the other in Spanish, her second release for Spanish-speaking fans since “Mi Reflejo (My Reflection)” in 2000.

TooFab recently spoke with Aguilera ahead of her new partnership with SweeTARTS, where she opened up about her musical journey so far, experimenting with new styles throughout her career and what she’s channeling into her upcoming releases.

“I’ve always kind of inserted different styles within my albums. The last record kind of explored me coming out of a time where I was feeling like I was coming out of a place where I wasn’t so happy and I wanted to rediscover who I was as an artist and being able to do that again and have the freedom to do that, so now I’m in really great place,” said Christina.

“I feel that through the time off that I had with quarantine, it really allowed many of us to be able to regroup, reassess what was making us happy, what wasn’t, because life is freakin too short,” she continued. “I think also when you hit — because I’m very proud of reaching 40 for the past year — [I feel] really good about earning every year that you have on this planet. I think it should be a reward for yourself. So going into this time, I feel like I’m approaching music as a grown ass woman who has had a lifetime of experience and the way I’m singing is just coming from I think a deeper place, and it’s a more confident place as well.”

“I’m surrounded with people that I feel so much connection and love for and from,” she continued. “I built these friendships over years and let go of some at the same time and have rebuilt new ones in the past year that I’m feeling so on a high about so you know it’s all good and I’ll speak a little bit about that on the records.”

Aguilera explained there are “two different feels” for her upcoming releases, adding that the comments above mainly pertained to the “English side” of things. As far as the Spanish project is concerned, she joked she was a “freakin’ teenager like baby” when “Mi Reflejo” dropped 20 years ago and to expect a more mature sound in 2021.

“My voice quality was different. I look back and I’m like, ‘Aw, baby Christina,’ Now it’s like, okay, she’s coming with a new set of pipes, and it’s just a deeper and I feel more experienced and interesting place to come from,” she continued. “I’m culturally exploring my roots a little bit more, I’m singing about my father and that’s kind of always been sort of an interesting, private but layered topic for me. So I’m really exploring that on the Spanish side with a really special song, and hopefully the fans will really appreciate that honesty and love, coming from the place I am now.”

Aguilera has spoken in the past about growing up in an allegedly physically and emotionally abusive household, and channeled her chaotic past into songs like “Fighter.” Now, Christina said she’s at a place where she’s no longer “looking back and blaming anyone,” but is instead focused on “recovering and healing and growing.” Aguilera said “having grown up helps you to do that.”

Speaking a bit about her process crafting new songs, Aguilera admitted “some take more time than others, for sure,” but experimentation is key.

“You just gotta go with what feels good, what feels right, work through some of the frustration sometimes, gather your nodes,” she continued. “On my ‘Bionic’ record, for instance, I got to experiment with so many different sounds and textures and beats and vocal sounds and, you know, so that was a really fun exploration of so many different facets of styles of music I love.”

That exploration and experimentation is what Aguilera wants to see from anyone entering the upcoming SweeTARTS competition she’s judging featuring the brand’s new SweetBEATS online beat-making mixer. Using pre-programmed melodies, tones and rhythms, fans can create their own music, with Christina hand-selecting the winning beat from the Top 20 entries. The winner will receive a personal, one-on-one advice session with Aguilera and studio time to turn the beat into a full, finished track.

“It’s all about just having fun with this and experimenting and I’ll be looking for and judging based off of creativity and how experimental you are,” she said of the competition. “Hopefully people will come to the table. It’s all about being fearless you know and pushing through some of the frustration to get to the other side but you should do it as a fun outlet, you know?”

She added that, while she was a judge on “The Voice” for a few years, this opportunity gave her a chance to “explore the other side of myself and what I do in a production sense” and “discover new talent through music.”

The SweetBEATS competition is live now.