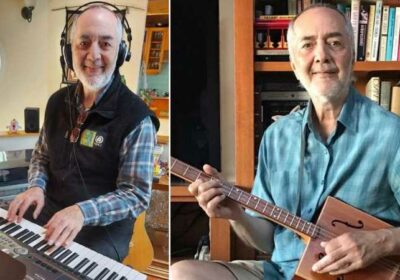 Children’s singer/songwriter Raffi makes up the soundtrack of many 80’s and 90’s childhoods and he’s still going strong. With an estimated net worth of $12 million, Raffi has touched the lives of millions of children (and still releasing music today) but he’s also worked as an author and activist for subjects dear to his heart.

From silly songs to child welfare and environmental activism, his life choices are far beyond rhymes and laughter but cemented in changing those lives he’s entertained for generations.

Born in Cairo, Egypt and raised in Toronto, Raffi Cavoukian got his start creating music for adults, playing folk music and covers in bars and cafes across Canada. His first record, in fact, is a folk-country album, “Good Luck Boy” in 1975.

His wife at the time, Deb, was a teacher and asked him to entertain the children in her classroom with some original songs. One single gig led to many more elementary school visits through a program sponsored by the Mariposa Folk Fest.

It was in a classroom of 30 when suddenly the lightbulb in his head went off according to MentalFloss. In his autobiography Raffi explained, he suddenly saw each individual child as a person versus a large group of children and never again “missed the individual child within the group again.”

Calling his children’s music his “accidental career” by the early 1980’s “Baby Beluga”, “Bannanaphone” and “Down By The Bay” was playing on record players in houses across the world and Raffi continued to make those choices that made kids individuals instead of a large group of dollar signs.

RELATED: The 10 Richest Children’s Authors Of All Time, Ranked By Net Worth

In light of his hyper focus on his child audience, Raffi was careful not to lose sight of his young fans and declined when asked to play at Madison Square Garden. As many as 18,000 fans would have attended the show, however, Raffi said the experience for his preschool fan base wouldn’t be “quality”. He understood that so many young people felt his songs playing on VHS and record players at home were just for them and the bigger the concert, the less connection.

He also chose to decline merchandise production, never selling t-shirts at his concerts and turning down corporate endorsements. According to The Washington Post, Raffi refused to put his product on candy, toys and cartoons for the mere sake of making money.

As years past, the iconic children’s singer/songwriter began to feel an urging to go back to his folk music roots and he became frustrated with his audience getting younger and younger. No longer, could he share messages through his music because toddlers and babies were attending concerts and he longed to push several important issues to the forefront.

The famous “Baby Beluga” song was inspired by a real beluga whale and Raffi’s life-long environmental activism. By 1988, he was taking the song about a baby beluga swimming wild and free and sharing the true struggle of the whale’s population dropping from 5,000 to just 450 in a few short years. In 1990, his “Evergreen Everblue” album was a mix of familiar tunes with new lyrics, plus new songs – all dedicated to environmental education. It wasn’t received well by parents expecting the typical child-friendly message, however, Raffi was turning a corner and becoming more serious about his passions.

He founded Centre for Child Honouring, a non-profit aimed at changing kids lives for the better and co-founded Red Hood Project, in response to the online bullying epidemic. He’s been an avid protester against marketing to children and can proudly say he has never done so.

In 2013, he wrote a novel, Lightweb Darkweb: Three Reasons to Reform Social Media Before it Re-Forms Us, discussing how social media was changing youth and the dangers involved in becoming immersed at a young age.

After an extended hiatus and nearly a decade pursuing his activism, Raffi found a middle ground. While he continues to lead and support several environmental and child activism organizations, he’s also found love and peace in new children’s music, concerts and collaborations.

In 2017, “The Best of Raffi” was released, bringing the now-adults favorite hits to a new generation. According to Raffi News, in 2018, the famous musician dropped “Dog on the Floor”, a new album of 15 inspiring children’s songs and in 2020, he collaborated on mom, Lindsay Munroe’s new album, “I Am Kind: Songs for Unique Kids”, lending his voice and expertise for the first-time venture.

The 72-year-old recently told Vulture the energy and love for children and music was back (thought it never really left) and he believed he’d make ten more children’s albums by the time he’s 80. The news will certainly please generations of old fans and those new ones, still to come.

READ NEXT: The 8 Highest Earning Children’s Movies Ever