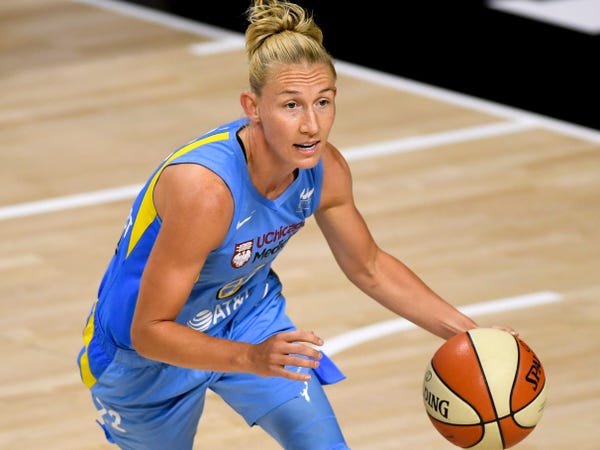 The WNBA has a new single-game assists leader.

Fittingly, the two-time WNBA All-Star's record-breaking pass fell into the hands of Allie Quigley — the Sky's sharpshooter who also happens to be Vandersloot's wife. With just over a minute remaining in the contest, the former Gonzaga standout found Quigley in the corner, where the three-time All-Star rose up and drained a three-pointer to give Vandersloot her 17th assist of the night.

After the game, Vandersloot described assisting her wife for the record-breaker "puts a little cherry on top" of the monumental feat.

"It's really special," Vandersloot said. "I know she was happy for me. She wanted to do that for me. [The play] was initially for Ruthy [Hebard], but the backup plan was always Allie [Quigley]. You can always count on Allie to knock down some late shots so that one was special to see it go in and just to know how happy she was for me, even though she made the shot, that's special."

The couple — known to WNBA fans as "The VanderQuigs" — teamed up to tack one more assist onto Vandersloot's record in the final seconds of Monday's game. Once again, the point guard found Quigley beyond the arc, where she drained yet another trey to give her wife her 18th assist on the evening.

In her post-game interview, Vandersloot said she was especially proud of breaking the 16-assist record — which was set by Ticha Penicheiro in 1998 and matched again in 2002 — because she "absolutely thought this record was untouchable."

"Shoutout to Ticha [Penicheiro] for setting this one," Vandersloot added. "She set the bar very high. I don't think that this one is going to be touched very often. It's tough to get 16 assists in a game, so this one is really special. My teammates were knocking down shots, and they were just as happy as I was. It makes it so much more enjoyable for me out there."

Through her time in the league's bubble thus far, Vandersloot has averaged a career-high 13.2 points per game and a WNBA-leading 9.3 assists per contest — a whopping 3.7 assists more than the next-best tally in the league. The 10th-year point guard is running for this year's WNBA MVP award, and Chicago head coach James Wade seems to think there are few players more deserving of the honor — and the all-time single-game assist record — than Vandersloot.

"You wouldn't find a [more] selfless leader, and you can tell in the way she plays," Wade said. "We just wanted to be there for her and make shots for her once we had a feeling that she was going to get that record… And it's actually a good reward for somebody so selfless, and I just appreciate being a part of it."

Check out all 18 of Vandersloot's assists on the night below: