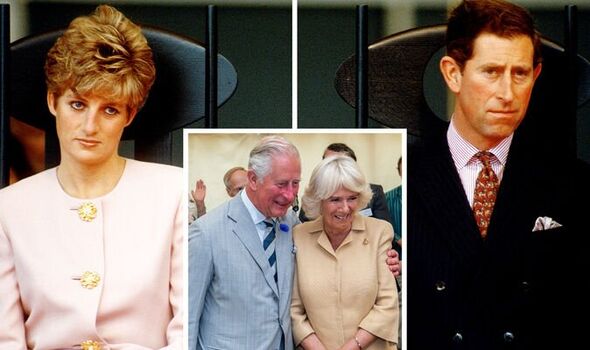 Over the years, Prince Charles has stepped out for many solo engagements, but more recently he has been accompanied by Camilla Parker Bowles. When the Prince of Wales is joined by his wife, the couple has been photographed laughing and jostling with one another. Express.co.uk spoke to Inbaal Honigman, a body language expert about Charles and Camilla’s interaction and whether there are any similarities or differences with how Charles used to behave with Princess Diana.

In their early twenties, Charles and Camilla met and fell in love after experiencing an “instant attraction”.

Together they enjoyed an 18-month romance before Charles joined the HMS Minerva in mid-January 1973 for a seven-month voyage in the Caribbean.

When he was in the West Indies, he received the news that Camilla had become engaged to Andrew Parker Bowles.

It wasn’t until 1977 when Charles first noticed Lady Diana Spencer, and it was in 1981 when he proposed.

The couple went on to get married that same year in front of millions of worldwide royal fans, but following two children, the royal couple got divorced in 1996.

A couple of years later, Charles and Camilla announced they were dating and then 34-years after their first meeting, they finally married.

“The pair are often observed with their arms interlocking, looking each other in the eye, smiling full into each other’s faces, and generally seeking each other’s closeness, that the collective consciousness sees him as this guy.

“The warm, tactile, even romantic husband who is devoted to the lady beside him.

“Often photographed facing the same way as each other, or indeed facing one another, the married couple are clearly in love, and feel comfortable in each other’s presence, as they share royal duties, and the odd private moment.”

“Is he this guy though?” She questioned then added: “A glance back at his photos with his first wife, the late Princess Diana, reveal a very different Prince.

“Official images and some personal press shots from the early years of the young couple’s married life, show a blushing Diana and an often discontent Charles in absolute disarray towards one another.

“There’s always a good few feet of social distancing between them, and they rarely face the same way.

“In the starkest of photographs, they’re facing squarely away from one another, both standing stiff with their arms by their sides.

“But even on the occasions when they’re not searching for something to look at on opposite ends of the room, they are not in harmony – if they both look ahead, it’s never in the same direction.

“Their facial expressions don’t match. They both look like they wished they were elsewhere, with somebody else.

“Partly, this disparity between 80s Prince Charles and his military stance, and modern era granddad Charles, all warm and loving, may be down to social protocols around the royals changing.

“It could be that back in his first marriage, the Prince was under clear instructions to not hold hands, to not look too happy – and during those days, there was no room for flexibility even with his young wife.

“These days now, the royals are accepted as people in their own right, and the Prince shows his spontaneity and natural wit without any negative repercussions.”

Inbaal continued: “Another consideration is maturity – many people only develop their romantic sides as they age.

“There is every chance that the apparent antipathy between Prince Charles and Princess Diana in the early days, expressed in their body language of opposites, was a result of social reasons, not emotional incompatibility,” she added.