With a gold medal on Friday, Canadian soccer player Quinn made Olympics history.

The 25-year-old Toronto midfielder is the first openly transgender and nonbinary athlete to win a medal at the Games. Canada beat Sweden 3-2 Friday via penalty kicks ― another first for the soccer finals.

In an interview with CBC Sports on Monday ahead of the final, Quinn said they were happy to be a visible advocate and role model for young people.

“Athletics is the most exciting part of my life and it brings me the most joy,” Quinn, who only goes by one name, said. “If I can allow kids to play the sports they love, that’s my legacy and that’s what I’m here for.” 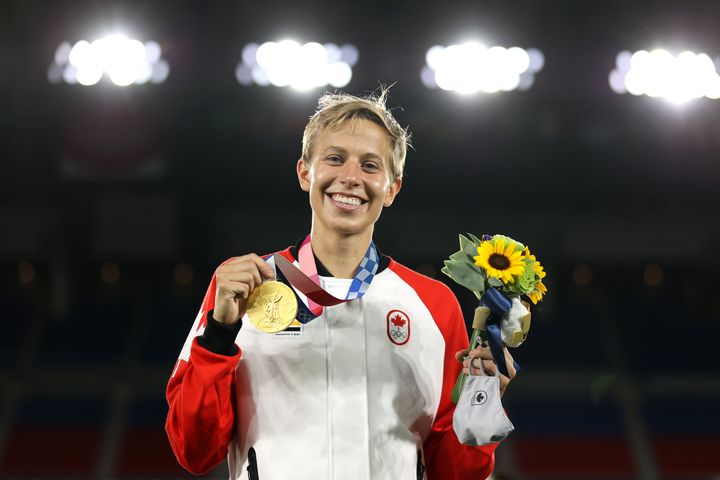 Quinn played for Canada in the 2016 Games in Rio, where the team won bronze. But they did not come out publicly until last September, despite having been out in their personal life for several years.

They elaborated on what it means to compete in Tokyo in a social media post last month, describing a complex set of emotions.

“First openly trans Olympian to compete. I don’t know how to feel,” Quinn wrote. “I feel proud seeing ‘Quinn’ up on the lineup and on my accreditation. I feel sad knowing there were Olympians before me unable to live their truth because of the world.”

“I feel optimistic for change. Change in the legislature. Changes in rules, structures, and mindsets,” they continued. “Mostly, I feel aware of the realities. Trans girls being banned from sports. Trans women facing discrimination and bias while trying to pursue their olympic dreams. The fight isn’t close to over … and I’ll celebrate when we’re all here.”

While Quinn made history as the first medalist, they’re not the first openly transgender or nonbinary athlete at the Tokyo Games. Alongside Quinn are Laurel Hubbard, a weightlifter from New Zealand; Chelsea Wolfe, on the U.S. women’s BMX Freestyle team; and American skateboarder Alana Smith.