Firefighters and officials at California’s largest utility company braced for hot, dry and windy weather in northern and central areas of the state this weekend that may fan the flames of several major wildfires or ignite new ones.

Pacific Gas & Electric warned Friday it may cut power from Sunday morning to Monday, potentially affecting 97,000 customers in 16 counties, during which forecasters said a ridge of high pressure will raise temperatures and generate gusts flowing from the interior to the coast.

The utility is tracking the weather to determine if it would be necessary to shut off power to areas where gusts could damage the company’s equipment or hurl debris into lines that can ignite flammable vegetation.

PG&E continues to monitor a potentially strong and dry offshore wind event forecasted to start early Sunday morning and expected to last through Monday. To see if you may be impacted visit https://t.co/OsnSd2rYTN pic.twitter.com/1oH4wF35GT

When heavy winds were predicted earlier this month, PG&E cut power to about 167,000 homes and businesses in central and Northern California in a more targeted approach after being criticized last year for acting too broadly when it blacked out 2 million customers to prevent fires.

PG&E equipment has sparked past large wildfires, including the 2018 fire that destroyed much of the Sierra foothills town of Paradise and killed 85 people.

Firefighters battling the state’s largest wildfire braced for the change in weather by constructing fuel breaks on Friday to keep the flames from reaching a marijuana-growing enclave where authorities said many of the locals have refused to evacuate and abandon their maturing crops.

The wildfire called the August Complex is nearing the small communities of Post Mountain and Trinity Pines, about 200 miles northwest of Sacramento, the Los Angeles Times reported. 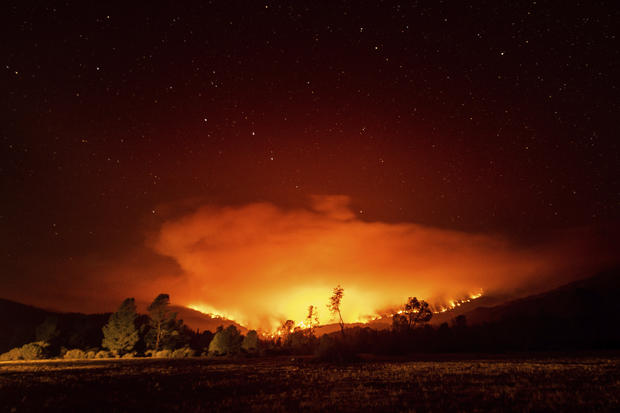 Law enforcement officers went door to door warning of the encroaching fire danger but could not force residents to evacuate, Trinity County Sheriff’s Department Deputy Nate Trujillo said. “It’s mainly growers,” Trujillo said. “And a lot of them, they don’t want to leave because that is their livelihood.”

Numerous studies in recent years have linked bigger U.S. wildfires to global warming from the burning of coal, oil and gas, especially because climate change has made California much drier. A drier California means plants are more flammable.

The U.S. Forest Service’s Pacific Southwest Region announced Friday it is extending the closure of all nine national forests in California due to concerns including fire conditions and critical limitations on firefighting resources.