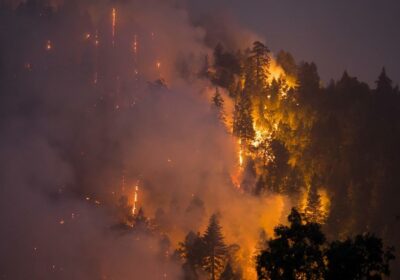 The ten most polluted cities in the United States are currently all in California and Nevada as smoke from the massive Caldor Fire lingers over the region, according to airborne pollutant monitoring company IQ Air.

On Tuesday evening, Tahoe Vista, located along the north shore of Lake Tahoe, had an air quality index score of 415, which is within the highest level of concern and considered “hazardous.” The concentration of the main pollutant, PM2.5, in the air is currently 37 times above what is recommended to breathe in by the World Health Organization, according to IQ Air.

Earlier Sunday, Tahoe Vista exceeded the air quality index’s total range of 0 to 500 when the area reached a score of 596. Anything above a score of 200 is deemed unhealthy for all groups of people regardless of their health status, senior director of climate and health at the Environmental Defense Fund Dr. Elena Craft said.

“There is a major health threat in the region right now,” she told CBS News. “It’s very important to be mindful about the quality of air.”

Craft said breathing in wildfire smoke can result in heart attacks, cardiac arrest, cancer and asthma attacks for those who suffer from the condition. She added some of these health complications may happen days after being exposed to polluted air.

“Just because you might be out of the fire at the moment, if you had some previous exposure over the couple of days before, that puts you at increased risk for some of those cardiovascular issues,” she said.

She recommended those in affected areas limit their exposure to air pollution, stay indoors, use an air filter or purifier in their home, keep any asthma or heart medications on standby, reduce physical activity and monitor the weather closely. She also said that some face masks can help protect against air pollution as well.

“You really want to try to avoid being outside and being exposed, not only if you are one of those vulnerable populations, but just anyone,” Craft said. “It is damaging to your lungs.”

As of Tuesday, the nearby Caldor Fire has burned 117,704 acres and is only 9% contained, Inciweb reports. The fire has destroyed 455 structures and still threatens 17,000 others. Two fire-related injuries have been reported as of Monday, and thousands of residents have had to evacuate their homes, according to the Governor’s Office of Emergency Services.

California officials this week said Caldor is “knocking on the door to the Lake Tahoe basin,” CBS Sacramento reported.

“We have all efforts in place to keep it out of the basin, but we do need to also be aware that is a possibility based on the way the fires have been burning,” Chief Thom Porter, director of the California Department of Forestry and Fire Protection, said Monday.