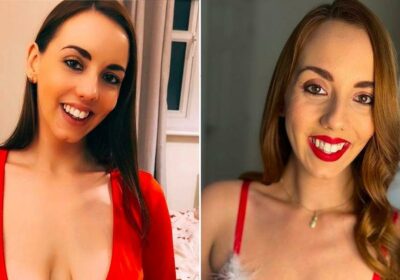 Britain’s “most famous swinger” is handing out naughty treats on Christmas day by making her explicit OnlyFans page free.

The mum wants to bring festive joy to people who have lost jobs or will be without loved ones on the special occasion.

And the swinging ambassador, known as Vista Wife, says she will even be available to respond to racy requests throughout the day.

Vista Wife told the Daily Star: “I’ve had so many messages from people who have lost jobs and really wanted to subscribe but can’t afford to.

“I’ve also heard from others who don’t spend time with their families or will be on their own or will be at work.

“I am all about give, give, give. It will not cost me anything to give it out for free for one day and it gives them something to look forward to.”

The married mum, from Lincolnshire, is making life-changing money on the explic site after joining earlier this year.

Since then she has been nicknamed “Britain’s most famous swinger” after her TikTok page hit more than one million likes.

And the 29-year-old said she now wants to give back this Christmas after all her recent success – including making tens of thousands a month on OnlyFans.

“A lot of people don’t even speak to anyone at Christmas and that is really sad,” she added.

“I’m all about being there for other people and if it helps in the slightest it has made my day.

“It won’t take away from my family Christmas – but I will be seeing if anyone needs anything or advice or I will even just to be there to say hey.”

Earlier this year Vista Wife told the Daily Star how she married her childhood sweetheart before getting into swinging.

The pair have been together since they were teens before they spiced up their sex life three years ago by becoming swingers.

It was a raunchy idea first suggested up by her husband – and the kinky duo now sometimes invite other couples over for sex while their kids are at school.

The ambition of going public was to make swinging less of a taboo and Vista Wife believes she has already achieved that.

She said: “I picked my children up from school the other day and a dad came up to me and said ‘good for you’.

“I have also been in Aldi and someone said 'I’m really impressed with what you are doing' even though they are not in the lifestyle. They said it was brave and that means a lot.

“We are giving people a voice and saying they should not be ashamed of themselves. It is OK to want more.

“We are starting to see people being a bit more accepting now."

She added: “I’ve had a lot of Instagram messages from people saying ‘oh my god you have helped me so much’.

“In the new year we just want to keep it going. I want people interested in joining the swinging lifestyle to keep getting the safest and correct advice.”