Home » Lifestyle » Brit lad marries woman on Zoom – despite her being 5,000 miles away in Mexico

Brit lad marries woman on Zoom – despite her being 5,000 miles away in Mexico 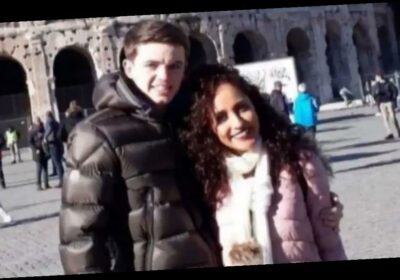 A couple have tied the knot on Zoom after the coronavirus pandemic forced them to cancel their wedding twice.

Andrew Bateman, from Merseyside and Mitzi Guzman, from Mexico City, are currently 5,000 miles apart from one another.

However, they didn't let them stop them from saying 'I do' and becoming man and wife.

The couple had been planning to marry in Mexico, but travel restrictions during the pandemic hasn't allowed that.

So instead, the pair – who have been together for three years – decided on a Zoom wedding with a celebrant, in accordance with laws in Utah in the US

Would you tie the knot over Zoom? Let us know in the comments section below.

Speaking about their marriage on ITV's Good Morning Britain, Andrew said: "Well, we were meant to get married on July 31 last year.

"That got moved with everything that was going on to February 6 this year.

"We haven't seen each other since last July….it's that difficult for us to see each other.

Andrew said that despite being engaged, the pair couldn't see each other because of travel restrictions.

But according to Liverpool Echo, the rules are more relaxed as a married couple.

Andrew continued: "We got the option to move our wedding to November this year but we may not be able to see each other before then.

"So, we got married last Friday on January 15 and now we can start rolling with the visa application so Mitzi can come here.

"It's just been that difficult to travel, even though we are together, we were only fiancés so they don't really allow it, but you are allowed to travel to see your husband and wife, the rules are a bit easier so now we should be able at least when the lockdown lifts see each other."

Mitzi added: "I'm happier now even if the wedding was on Zoom it was perfect and the only thing we want is to stay together."