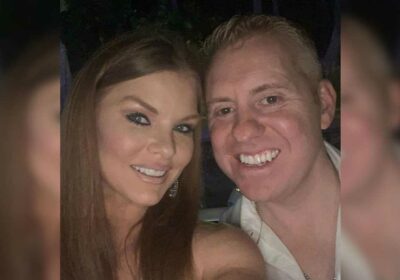 “Real Housewives of Dallas” star Brandi Redmond bared her raw emotions during the show’s reunion as she described how heartbreaking it was to watch a viral video of her husband kissing another woman.

“I’m disappointed that I’m aware of when that happened,” she told host Andy Cohen on the “RHOD” special, which aired Tuesday night. “It was in Las Vegas during a dual bachelor/ bachelorette party for my sister and brother-in-law.”

She then added “But yeah, I’m extremely disappointed,” before breaking down in tears as her costars looked on helplessly.

The video, which Brandi said was filmed in 2018, began surfacing in March and features a man who appears to be Bryan with his arms wrapped around another woman at a club, at one point bringing her in for a kiss.

“I will tell you that, you know, this was the craziest year and my darkest hour,” Redmond said through tears.

“That man was there for me and is there for me, so I feel like I would be really a piece of s–t if I didn’t, you know, be there for him because he’s hurting too right now.”

Brandi said that the worst part of the debacle is that a fan sent the video to one of their daughters’ private Instagram accounts so she could see it.

“As much as I can be angry and stuff, like, that’s her dad and I just feel like it’s just … not okay,” she cried.

Brandi, 42, appeared at the sit-down via video chat as she sat next to Kary Brittingham on the flight from Dallas to New York, and Brittingham, 50, tested positive for coronavirus upon her arrival to the Big Apple.

Her castmates all expressed their support for Brandi. Her best friend, Stephanie Hollman, told Cohen that while she had not spoken to Bryan directly about the video, she was angry at his behavior.

“She has been through so much,” she said. “I was honestly terrified that she was going to do something to herself, so I had a good friend of mine [check on her] … ’cause I was like, ‘You have to go see her because I can’t get a hold of her,’ because every one of us was pretty much traveling. It was spring break.

“And then he said he walked in the baby’s room, it was pitch black and she’s sitting in the corner just holding her baby and bawling and it just broke my heart. Like absolutely broke my heart.”

Brandi concluded by saying that she believes someone put the video out into the world again to hurt her, with some of her co-stars suggesting Leanne Locken as the culprit. Locken denied any involvement on social media.

Earlier in the episode, Redmond broke down the timeline of her pregnancy with Brilynn, explaining that she gave birth in February, which meant that she was pregnant — and drinking — throughout the season.

“We started filming and I was probably maybe two weeks pregnant,” Brandi said. “And by the time I found out I was pregnant, I was out of my first trimester, so yeah.”

Brandi added that she found out she was pregnant during her annual gynecological visit and that her pregnancy was a “miracle” because she was previously told that she was pre-menopausal and the chances of her getting pregnant again were slim.

“She came in and she told me that — she was like, ‘You came back positive that you’re pregnant.’ So then she does the scan on my stomach and I see a baby on the screen and I completely have a panic attack and my doctor is like, ‘Brandi, this is amazing! This is a miracle! But I have to ask, is this not Bryan’s?’ And I was like, ‘What? No! This is Bryan’s!’ And she was like, ‘Okay, I was just making sure because you seem upset about it.’”

Brandi then explained to her doctor that she hadn’t been taking care of herself or her baby properly, but luckily Brilynn was born in great health.