Boohoo slammed by shoppers for labeling size 8 clothes as ‘large’ ‘No wonder women have body insecurities:’ Online retailer Boohoo sparks outrage after it describes a UK size 8 as ‘LARGE’

Online retailer Boohoo has been criticised on social media for labelling size 8 clothes as ‘large’ on their website.

Frustrated shoppers have taken to Twitter to slam the fashion website, claiming the brand are misleading their customers with their sizing information.

User @kaatiecasidy took a screenshot of a Boohoo model donning a pair of black ‘chain trim cargo trousers’ in a size 10, but in the product description, it states that ‘L’ is a size eight’ while medium is a size six and small is a size four.

Expressing her anger, she penned: ‘I beg your pardon @boohoo. Since when was a size eight a large… sort it out’.

Frustrated shoppers have taken to social media to slam fashion website Boohoo, claiming the brand is misleading their customers with their sizing information (above)

The initial Tweet related to the black ‘chain trim cargo trousers’ above. Outraged social media user @kaatiecasidy wrote: ‘I beg your pardon Boohoo. Since when was a size 8 a large…sort it out’

The comment has caused other disappointed customers to complain about their own experiences with the online retailer.

One disgusted shopper commented: ‘Looking at a pair of trousers on Boohoo and the sizes are just S, M, L, so I look at the guide to see what to get and a large is a size 8. Are you having a laugh?’ while another simply wrote: ‘I ordered clothes from Boohoo and I’m so disappointed.’

Others took to social media to slam Boohoo’s depiction of a ‘plus size’ model, with one person posting a picture of a lace bodysuit that the website described as ‘plus.’

She sarcastically questioned: ‘Plus size? OK Boohoo if you say so,’ while another equally outraged customer screenshot a separate picture and added: ‘Madness how this model has been used as a “plus size” model. No wonder girls have such body insecurities if this is in anyway considered plus.’ 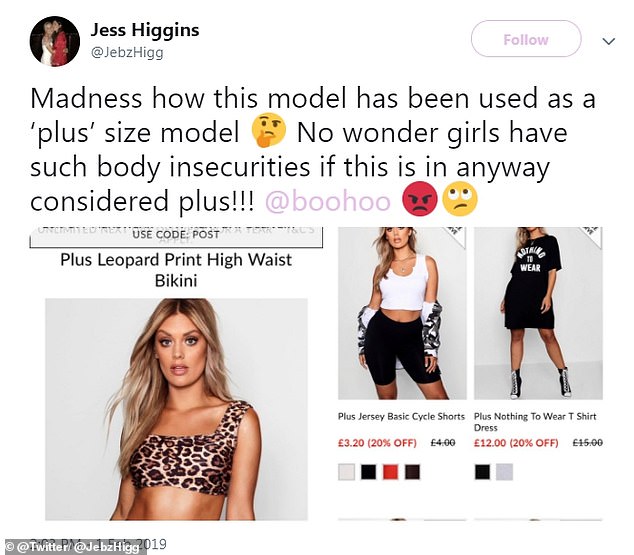 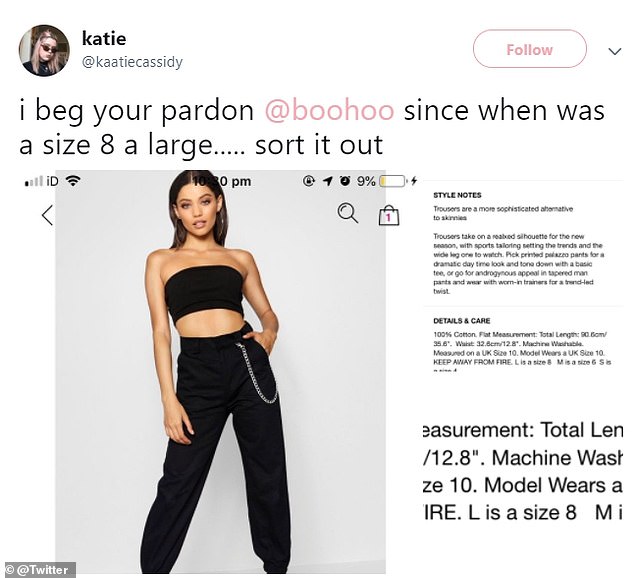 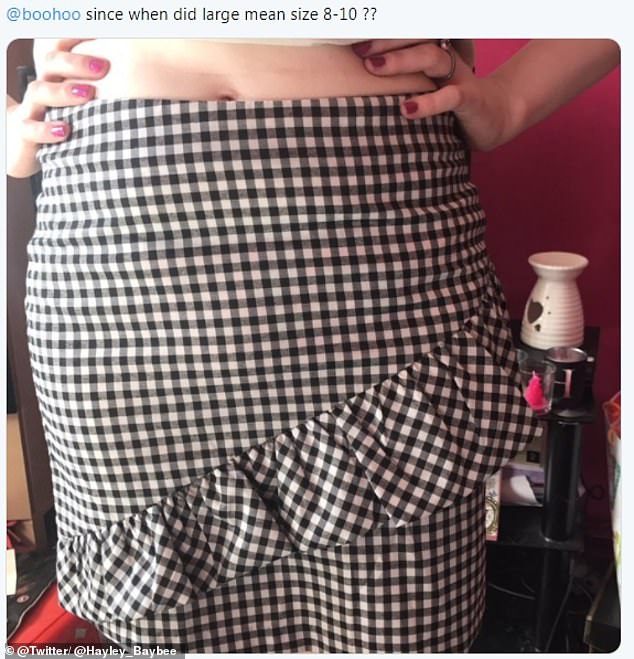 It’s not the first time Boohoo has been slammed for their sizing information. Over the last few months, other shoppers have taken to social media to complain, too. One frustrated shopper wrote: ‘Madness how this model has been used as a “plus size” model. No wonder girls have such body insecurities if this is in anyway considered plus’

And this isn’t the first time Boohoo have been criticised lately. In recent months, shoppers have flooded Twitter with complaints regarding Boohoo’s sizing.

One shopper previously wrote: ‘Why are Boohoo trying to tell me a size 8 is a med/large? Or did someone decide to put my Save the Children charity jumper in a hot wash before sending it to me?’

Another commented that what Boohoo claims will fit a size 8, isn’t even big enough for a ten-year-old child.

‘I have used Boohoo, but their sizing is horrendous,’ the annoyed shopper enthused. 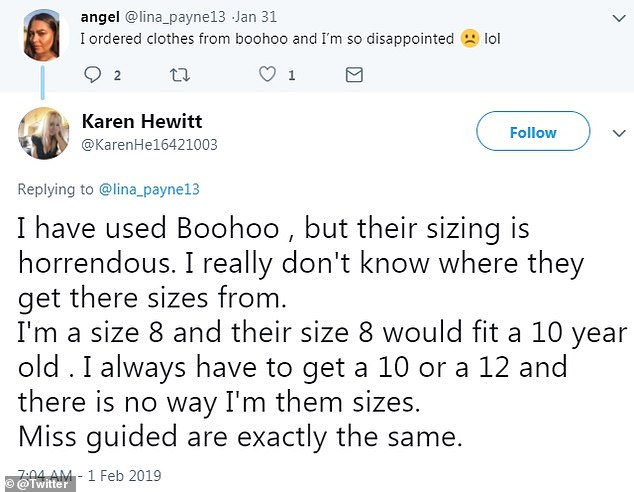 Boohoo has been criticised in the past for their sizing. Previously an angry customer wrote: ‘I have used Boohoo, but their sizing is horrendous. I really don’t know where they get their sizes from’