‘Bit of a bastard’ can’t take shine from dazzling production Barnum – The Circus Musical
★★★★
Storyboard Entertainment
Comedy Theatre, from May 2

Best known today as co-founder of Barnum & Bailey Circus, Phineas Taylor Barnum didn’t enter the circus trade until he was in his 60s, though it was a natural move. Throughout his long career as a museum owner and impresario, Barnum proudly embraced “humbug”, hucksterism and hoaxing as an indispensable part of his uncanny gift for publicity, and it made him a polarising figure even in his own lifetime.

He may have used questionable methods to enthral the public (his museum included attractions such as the “Feejee Mermaid” – a monkey’s head with fishtail attached) but it’s precisely the way Barnum seems to blur the line between dreamer and con artist, entrepreneur and exploiter of the gullible, that makes him so intriguing a figure to a post-truth world.

This professional revival of Barnum, the circus musical based on his life, is the first in Australia since the 1980s, and comes hot on the heels of Hugh Jackman playing Barnum in The Greatest Showman. It’s a dazzling event crammed with marvels, and it wouldn’t be possible without the renaissance in Australian circus arts over the past two decades. 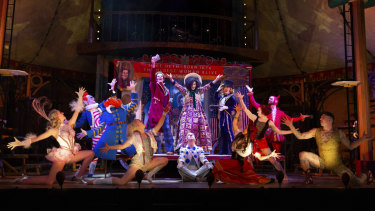 Barnum – The Circus Musical is playing at the Comedy Theatre in Melbourne.Credit:Jeff Busby

Director Tyran Parke juggles the extra layer of variety entertainment with ease, and it’s a tribute to the “quadruple threat” cast that many performers are capable not just of acting, singing and dancing up a storm, but have also mastered clowning, daring acrobatics, and graceful feats of aerialism.

The show needs all the excitement and spectacle it can get, because the central figure is, all said, a bit of a bastard. Indeed, Todd McKenney’s P.T. Barnum seems to emphasise the character’s unlikeable, narcissistic qualities, and doesn’t cut against them with the kind of irresistible charisma – the conspiratorial gleam in the salesman’s eye – that might make all comers happy to be taken for a ride.

Of course, McKenney is technically fabulous.

On one level, that’s a sharp and timely take on a man whom contemporary eyes might find wanting. Yet it does compromise the emotional grist of the piece, which hinges on a contrast in character with Barnum’s pragmatic, respectable, truth-seeking wife Charity, played with crisp vitality by Rachael Beck.

Why would Charity endure a man so self-absorbed he fibs and cheats and barely looks at her, if he weren’t possessed of such magnetic charms he could seduce anyone into anything? Well, who knows. As Barnum’s mistress, Swedish soprano Jenny Lind (Suzie Mathers), sings to perfection in this production – love makes fools of us all.

Of course, McKenney is technically fabulous. He sings beautifully in the duets, dances with flair, has a cartoonish sort of accent that never falters, and he’s even game for tightrope-walking without a net. He’s got everything you could want – and more – except that elusive X-factor.

Still, it doesn’t matter too much. In the end, there’s enough brilliance to raise the tent, not least from the inspired casting of Kirby Burgess as the Ringmaster, a role expanded to encompass everything from jazz vocals to comedic cameos. And the way every element of circus and musical theatre comes seamlessly together in this production – the splendid costumes and set, the jaunty orchestra, the sublimely talented and versatile ensemble – makes for a show that can’t fail to entertain.