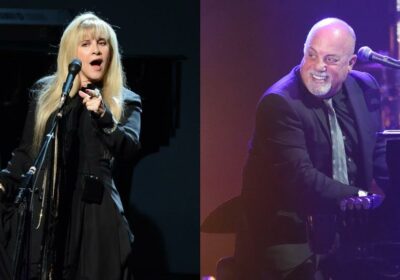 Rock and Roll Hall of Famers Stevie Nicks and Billy Joel have jointly announced a string of three co-headlining shows, marking the first time the two share a stage, happening in spring 2023. The pair will hit SoFi Stadium in Los Angeles on March 10; AT&T Stadium in Arlington, Texas, on April 8; and the Nissan Stadium in Nashville on May 19, with the promise of at least a few more such concerts to come.

The shows are being curiously advertised as “one-night-only,” but their pairing is clearly no one-and-done deal — the succession of dates revealed makes it clear that their pairing amounts to, at the very least, a mini-tour. News of the first show in Arlington was announced on Wednesday and hinted at a larger outing in the works. “Excited to hit the road with the amazing @billyjoel in 2023,” Nicks posted to her social media, with the ticket sale times and dates for the AT&T Stadium concert. “More soon!”

The third show in L.A. was revealed early Thursday morning, with Live Nation and SoFi writing in a statement: “The spectacular one-night-only show marks the first time the two have ever performed on the same stage in Los Angeles.”

According to the Nashville Tennessean, Wilson Howard, chairman of Live Nation’s southeast division, said “there may be five to seven shows” as part of the event billed as “Two Icons, One Night.”

Ticket sales for the SoFi Stadium and Nashville shows will go on sale to the general public on Nov. 11 at 10 a.m. local time on Ticketmaster.com. Tickets for the Arlington show go on sale on Nov. 11 at 8 a.m. PT via Live Nation and Seat Geek.

Nicks recently played a show at Texas’ Cynthia Woods Mitchell Pavilion on Wednesday as part of her fall tour; she’ll be playing a hometown show in Phoenix alongside Vanessa Carlton this weekend. As for Joel, the “Piano Man” has been enjoying a lengthy residency at New York City’s Madison Square Garden since 2014, and recently added 2023 dates in January, February and March. He’s also scheduled to play London’s BST Hyde Park on July 7, 2023.