The lashing Aesha Scott received from chef Tom Checketts on Below Deck Mediterranean exploded even further as Checketts ends up telling Scott to “f**k yourself.” 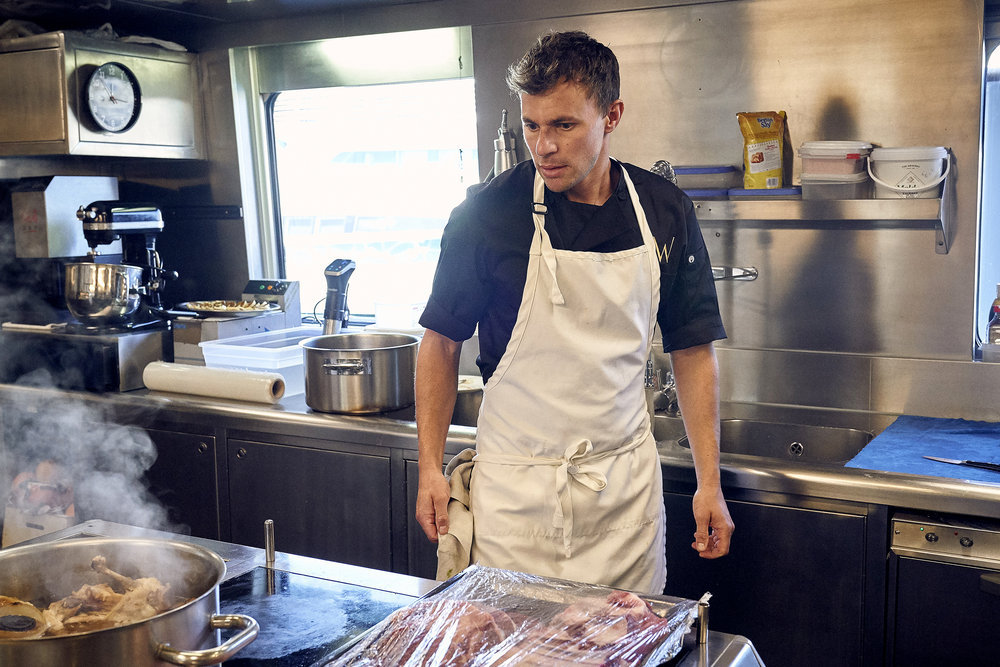 The upcoming episode picks up during Checketts’ meltdown over being asked to slice a cucumber for the guests while he was on break. He took his anger out on Scott even though it was Captain Sandy Yawn who asked Checketts to prepare the snack for the guests.

Scott apologized to Checketts which seemingly made the situation worse as he groused at her to the point where she was brought to tears. Scott, who is usually easy-going and tough, ends up shocked and upset, ultimately confiding in chief stew Christine “Bugsy” Drake.

Scott reminded Checketts she had nothing to do with the call but he continued to hurl harshness her way. “Why are you giving me attitude?” she asked him during an exclusive sneak peek clip.

“F**k yourself,” he said sarcastically and continued to clean the kitchen. Scott said she was with the guests doing a flip. “I hear ‘cucumbers,’ so I run down,” she said. “I had nothing to do with this. Go have a f**king cry with Sandy.”

Is there already fresh trouble in the galley? ?

“If you think you feel the need to apologize, I’m having a go at you for something that you didn’t do,” he said to Scott. But she continued to apologize and tried to explain she was sorry for the situation.

“Yeah, well I accept it then,” Checketts said factitiously to Scott as he stormed away.

Scott delivered the food to the guests and walked through the kitchen where Checketts was still working. She said nothing to him but continued to the crew mess where she finds Drake. “Hi, can you come to the cabin for a second,” Scott said to Drake in a small voice.

Drake can instantly tell Scott was rattled. “Tom and I just had an argument,” Scott said brushing tears from her eyes. Drake looked genuinely concerned and listened intently. “He’s so grumpy,” Scott added. Scott then explained the situation and how she picked up on her radio that a guest wanted cucumbers.

Get a crash course in berries and boiling from Prof @Aesha_Jean!

“By the time I got into the galley, Tom comes up and he’s like, ‘Are you f**king serious? Cucumber and fruit? Like you can’t slice it yourself?’” Scott recounted. “And then obviously I got teary. And then he’s like, ‘Aw stop with the bloody waterworks.’” Drake hugged Scott and apologized for the situation.

They both agreed Checketts was caught up in the moment. “He’s just angry,” Scott said. Scott shared in a confessional that Drake was very approachable and she was happy she could confide in her.

Bosun and Checketts’ girlfriend Malia White arrived in the kitchen, which is when Checketts decided to unload on her. “I’m pissed off,” he said. “Is there no other f**king adult on board that can slice a f**king piece of cucumber?”

“If I was Sandy in that situation, I would have seen Tom is not in the galley, he’s not answering his radio,” Checketts said in a confessional. “You would assume that I went for a break. Maybe it’s because I don’t take a break f**king ever. She didn’t assume that I was. For her to knock on the cabin door and say the guests want some cucumber slicing … I’d feel embarrassed.”

Chef @tomjchecketts doesn't mess around when it comes to tasty treats.? #BelowDeckMed

Checketts said the scenario changed everything now. “Aesha started crying,” he told White. “And like I’ll apologize to her because I didn’t mean to come across as being so rude.

Below Deck Mediterranean is on Monday at 9/8c on Bravo.