BEL MOONEY: A message of hope amid horror of London Bridge attack A message of hope amid horror of London Bridge attack: I pray this tragedy doesn’t mean the dreams of these idealists die too, writes BEL MOONEY

The image is too haunting to bear – Leanne O’Brien, the heartbroken girlfriend of London Bridge terror attack victim Jack Merritt, inconsolable as she attended a vigil for him in Cambridge. A veterinary science student, she had dreamed of a lasting future with him, and only last month they celebrated his 25th birthday on a trip to Spain.

But yesterday the 26-year-old joined a crowd of around 1,000 people to commemorate Jack and Saskia Jones, who died with him.

That such anguish was caused by a murderer in whom Jack and Saskia had seen hope, someone they wanted to help, made it all the more agonising to witness.

It is impossible to imagine the scene before horror came. A group of people sitting in beautiful, civilised surroundings, discussing justice, education, change and the possibility of transformation, forgiveness and redemption – values essential to a civilised society.

Then Usman Khan struck, like a predator in a dovecote. And by murdering Jack and Saskia, the jihadi succeeded in stabbing through the heart of the moral principles these two fine young people embodied. 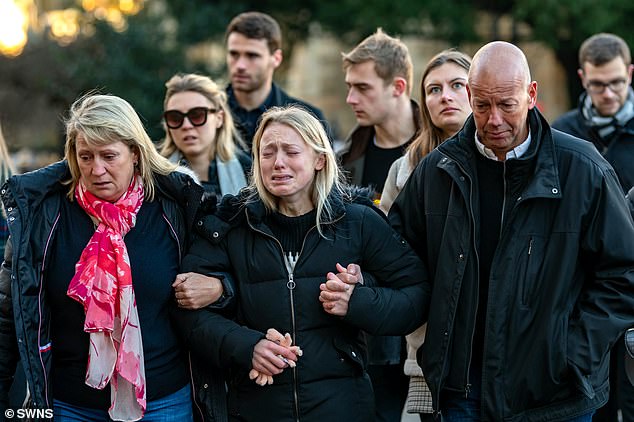 The image is too haunting to bear – Leanne O’Brien, the heartbroken girfriend of London Bridge terror attack victim Jack Merritt, inconsolable as she attended a vigil for him in Cambridge

In the wicked act of destroying their lives he called into question the very essence of their beliefs. Or did he?

As their families grieve in private and the country unites in horror at what happened, perhaps we should take a moment to reflect that the dream of a better world which inspired Saskia Jones and Jack Merritt can never be destroyed.

Surely the greatest memorial to those two idealists would be for the rest of us to acknowledge the indestructible power of goodness.

I dare to believe that is what they would have wished.

It is unbearably painful to read of their respective trajectories towards that terrible moment when Usman Khan struck out at the very people who would most have stood up for his rights in the conviction that he had changed, as he claimed.

Both of them believed passionately that prisoners could be rehabilitated and take their places within society once more. Of course that process depends on many, many factors – and both young people were intelligent enough to know that.

Jack, 25, worked as a co-ordinator for Cambridge University’s Learning Together programme, which aims to bring students from outside and within prison together to learn alongside one another and understand the process of rehabilitation. Saskia, 23, was a volunteer studying for a Master’s in criminology at Cambridge.

Both must have been acutely aware that while there is a wealth of missed opportunity and talent within the prison population, the key question – in the Learning Together project’s words – is how ‘to harness this great potential in ways that are inclusive, supportive and safe’. How bitterly ironic that word ‘safe’ seems now.

Naturally, Khan’s heinous crime has raised many questions about the sentencing of terrorists but for the point of this argument, I don’t want to address them – especially in the febrile atmosphere of this election.

Like everybody else, I am astonished and angered that this convicted terrorist was allowed to step out of prison after only eight years. But that’s not the main point here. 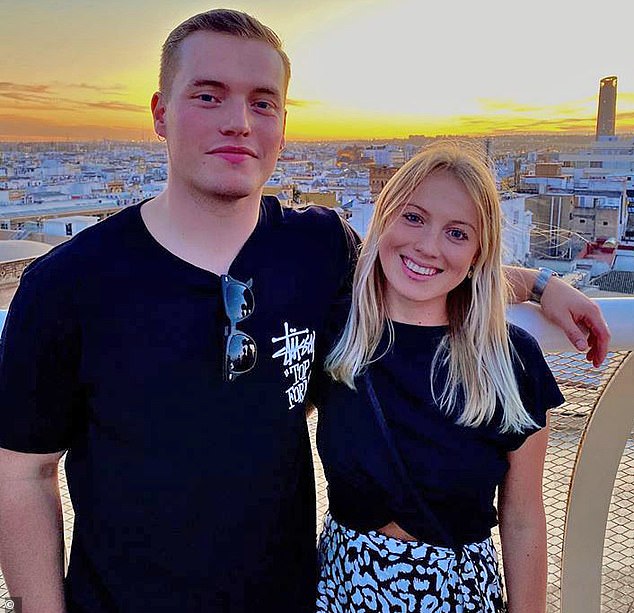 Yesterday the 26-year-old (pictured with Jack) joined a crowd of around 1,000 people to commemorate Jack and Saskia Jones, who died with him

I want to suggest that those who naturally adopt an indiscriminate ‘lock ’em up and throw away the key’ attitude to prisoners betray the values of Jack and Saskia perhaps as surely as evil Khan did himself.

It’s important to remember that at least one of the civilian heroes who tackled Khan was a former prisoner attending the rehabilitation course from which he launched his attack.

He risked his life to strike back and save others’ lives. What does that tell us? Yes, that men will act recklessly when adrenaline is pumping.

But it also suggests that within many who have done wrong, there is a desire to do right.

When I was Jack Merritt’s age, I was passionate about penal reform and joined the Howard League, a charity dedicated to this aim. Some of my earliest journalism was about probation, parole and prison – an interest partially fuelled by the actions of somebody I knew well.

I understood how criminality can devastate an innocent family, as it has the loved ones of the London Bridge victims.

But I also realised that damage and deprivation can lead to wrongdoing. I visited prisoners’ wives and witnessed hardship and courage. Above all, I believed in the possibility of redemption – and through journalism became friendly with two men who were to demonstrate that shining goal in action.

Jimmy Boyle was a convicted Glasgow gangster and murderer when I met him in Scotland’s notorious Barlinnie prison.

His history was appalling – yet when I talked to him five years into his life sentence, his intelligence and aspiration shone out. He had already started to work as an artist and went on to became a sculptor and novelist after serving 14 years.

You might ask: ‘What of his crimes?’ Anybody who knew Jimmy would reply: ‘But he served his time – and was changed.’

It was extraordinary, too, to meet George Thatcher, the last man in England who had watched a judge don a black cap and sentence him to death – a sentence commuted to life imprisonment. Writing about prison reform, I visited Thatcher in Gartree Prison, Leicestershire, and heard about his fight to clear his name of the 1962 murder of a post office worker in an armed robbery.

George was already writing and after I met him in 1975 one of his plays was performed at the Royal Court Theatre in London. He was to serve 18 years – and then live happily and blamelessly with his wife until his death.

Those who think keys should be thrown away might be asking: ‘What of that murdered man?’ Yet anyone who know George would reply: ‘But he served his time – and was changed.’

Saskia and Jack knew people can be redeemed. That they can become ‘good’ – especially if others believe in them.

Exactly 44 years ago, after my second son was stillborn, a letter arrived from HM Prison Gartree. Thatcher had heard through a mutual friend and wrote: ‘I’m not going to make you cry because you have shed enough tears. But somewhere along the line there is a joy for you which will surpass all the pain – and only be possible because of it.’ When I read those beautiful words, I knew that faith in rehabilitation is justified. 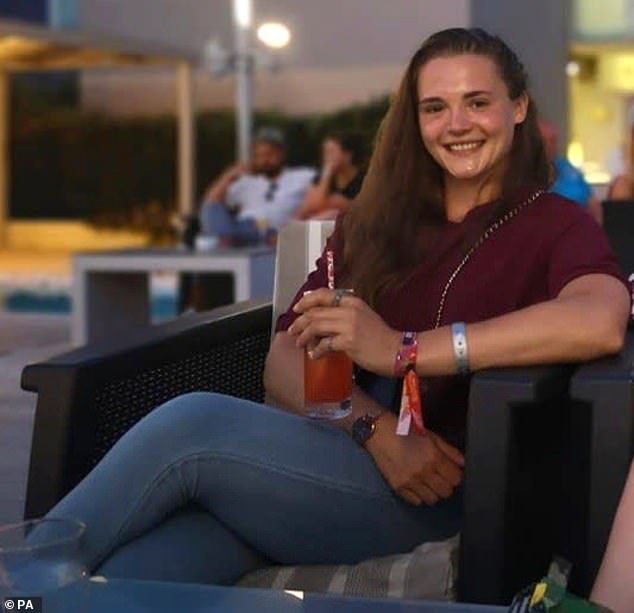 As their families grieve in private and the country unites in horror at what happened, perhaps we should take a moment to reflect that the dream of a better world which inspired Saskia Jones (pictured) and Jack Merritt can never be destroyed

Of course we must require those who do wrong to be punished – and hope that will deter others.

But it must never be forgotten that rehabilitation is the vital third aim of imprisonment after punishment and deterrence.

And that all those who work to that end do so for this society as well as for the individual men and women who will one day be freed.

What would we become without the dreams of young people like Saskia and Jack? Through their idealism – and the actions that follow – they become the goodness they wish others to aspire to, the change they wish to see.

Yes, they may make errors of judgment and even become disillusioned – but that should never stop the striving for a better world.

It grieves me that ‘do-gooder’ is used as a sardonic term of abuse when, after all, we justifiably detest and fear those who do harm. Why do people sneer at ‘bleeding hearts’ – when hearts should bleed at the sorrows and wrongs of this world?

Outraged by the atrocity carried out by Kahn, it is too easy to pull down the shutters against all sinners and decry any hope they might change. Let us not do so.

Good has faced up to evil as long as humans have drawn breath – and the devil usually seems victorious. Yet faith, hope and charity are the weapons we can level against him – as strange and tough and powerful as that narwhal tusk used against Khan on London Bridge.

That is what Jack and Saskia stood for – and no wickedness or calls of ‘an eye for an eye’ can outweigh the goodness of the beliefs they lived by and for which they died.