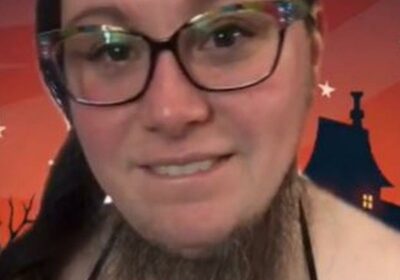 A woman found fame when she embraced her beard and started showing it off to the world.

The social media star, who goes by the name PeekabooPumpkin, now has 51,000 TikTok followers.

Peekaboo is from the US – and her inspirational videos have acquired 474,000 likes on the viral video platform.

On the adult subscription site, she charges $12 per month (around £8.70) for explicit content.

She regularly interacts with her followers on Instagram, where they often ask her questions about her beard.

In one TikTok video, one fan asked her: “How did you grow the confidence? I am nervous to let mine grow.”

PeekabooPumpkin replied: “It actually took me a lot of hard work to get to this point to be accepting of my beard and I’m in a much happier place now.

Another question posed was: “Genuine question, why do you only have hair on your neck and chin and not face?”

One kind-hearted user – @meliodasthedrgonsin8 – commented: “Even with a beard you’re still beautiful.”

And in another post, PeekabooPumpkin used the caption: “When you are a female with facial hair you learn to love yourself differently.”

One cheeky fan even asked her out on a date.

He wrote: “Are you single? I never dated a woman with a beard but I would love to date you.”

But unfortunately for user @staypostive4thehaters she replied to say she was happily married.

She also confirmed she worked full time and that she’s “walking proof” that laser hair removal doesn’t work because she believes it creates more problems.

Despite being trolled by some, PeekabooPumpkin also receives plenty of support online.

One fan wrote: “You handle these haters with grace and poise. Such a natural beauty, girl. Killin it.”

Another said: “I can’t help but love your energy! I hope your evening is fabulous.”

Over on Instagram she said her "TikTok is blowing up I cannot keep up" after quickly gaining thousands of new followers.