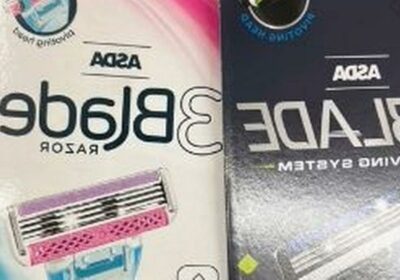 Asda shoppers have been left outraged after finding out that the supermarket chain sells fewer women's razors for a higher price than the men's version of the same product.

Lee Tasker, a TikTok user who has been educating himself on 'pink tax' – which is where feminine hygiene products are sold for a higher price than men's products, was shocked to spot it happening at his local Asda.

The bloke was looking at three-blade razors on the shelves when he realised a pack of five in the men's section where being sold for £1 less than a pack of 2 of the same product in the women's section.

In the clip, Lee explained: "I went to Asda and I had a look at razors. Here are men's razors in Asda's own-brand, three-blade razors, pivoting head, suitable for sensitive skin – £2.

"Then I went over to the women's section and I found these three-blade razors, same again, pivoting head suitable for sensitive skin, lubricating gel, same as the men's.

"That's one pound 50 per razor blade. Men's the preliminary, exact same razor blade is five, £2 divided by five to 40 pence a razor blade.

The video, which has gained more than 92,000 likes, was captioned: "Honestly, I think pink tax should be illegal."

TikTok users flocked to the comments to share his outrage at it.

One user wrote: "They shame us for having body hair and then charge us double for razors….."

Another added: "@asda you going to help us sort this out?"

A third said: "I've been buying men's razors for years because of this."

However, not everyone was sympathetic to the cost difference as one user said: "Call it stupid tax because it's their own choice to buy it."

ASDA have been contacted for a comment on the pricing of their three-blade razors.