Home » Lifestyle » ANDREW PIERCE: Why is Rees-Mogg STILL in denial about his disloyalty?

ANDREW PIERCE: Why is Rees-Mogg STILL in denial about his disloyalty? ANDREW PIERCE: Why is lemming Jacob Rees-Mogg STILL in denial about the fact that his disloyal tactics have risked our exit from the EU?

Usually calm and dignified, Jacob Rees-Mogg, the high priest of the Tory Brexiteers, was visibly taken aback when told by an interviewer on Tuesday night: ‘Historians will look back on this as the night you lost Brexit.’

Gulping for air, Rees-Mogg, who disloyally led a failed coup attempt against Theresa May in December, said: ‘I don’t acknowledge that.’

He then told his interrogator, the BBC’s Andrew Neil, that the March 29 exit date from the EU was still achievable.

The multi-millionaire Somerset Tory and his fellow European Research Group (ERG) members – with about 50 Tory MPs – have consistently portrayed themselves as guardians of a pure and uncompromising Brexit. 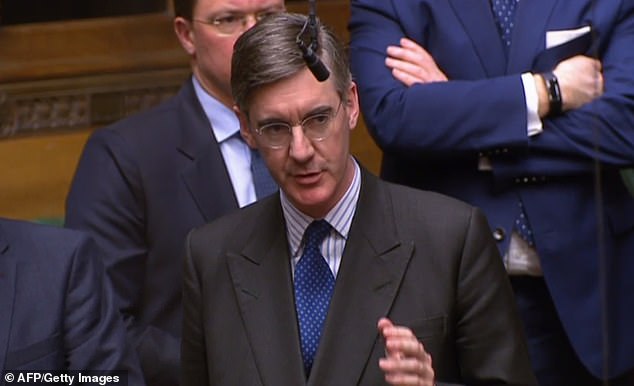 Brexiteer Jacob Rees-Mogg raises a point of order in the House of Commons after MPs voted to reject leaving the EU with no deal. Critics say that the constant placed on the Prime Minister by Rees-Mogg and members of the European Research Group may have scuppered an orderly Brexit

But by voting against the Prime Minister, they now face their worst nightmare: Brexit being cancelled. Certainly, it will be delayed. For last night’s crushing Commons vote means the ERG’s beloved No Deal Brexit is in ruins after being rejected by MPs ‘in any circumstances’.

Not for nothing have the ultra-Brexiteers been likened to lemmings running off a cliff edge.

Even after last night’s key vote, Rees-Mogg, in full lemming mode, claimed: ‘We are ruled by law, not through arbitrary motions in the House of Commons. The law still says we leave on March 29.’

But James Cleverly, the Tory deputy chairman, is clear that the ERG has shot itself in the foot.

‘The ERG may have missed the best and last chance to deliver Brexit,’ he said.

Quite rightly, the ultra-Brexiteers will get the blame as the saboteurs who’ve caused this national crisis, rather than the Tory Government for failing to deliver. How galling for them, too, that the person who triggered the amendment kicking No Deal into oblivion was former Labour Cabinet minister and die-hard Remainer Yvette Cooper.

For years, Miss Cooper has been Mrs May’s nemesis. As chairman of the Commons home affairs select committee, the wife of Ed Balls has perpetually tried to blame Mrs May for a series of government embarrassments when she was Home Secretary – such as the treatment of the Windrush generation and police cuts. 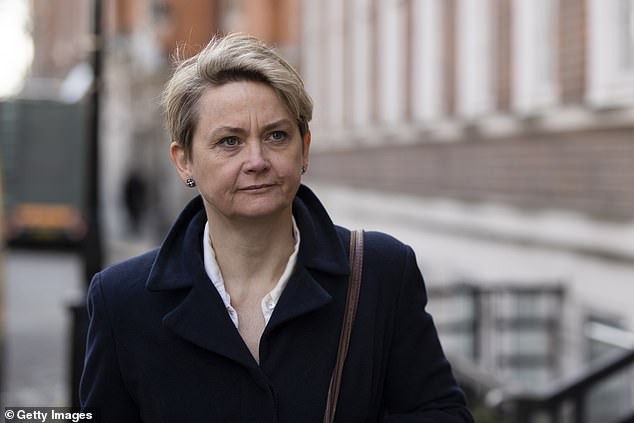 Remainer Yvette Cooper was the MP that triggered the amendment which has now removed the No Deal option from Mrs May’s negotiation strategy. It is still possible to leave the EU without a deal if EU countries refuse to agree any terms with the UK

It was significant, too, that Miss Cooper put forward the amendment which had been formulated by former Tory chairman Dame Caroline Spelman – whose initiative Rees-Mogg sneeringly described last night as a ‘mere motion’.

So what are Rees-Mogg and his not-so-merry band playing at?

If they had voted for the Government’s deal on Tuesday, there was a possibility that a form of Brexit could have been achieved – although, admittedly, one not as tungsten-tipped as they want.

The ERG is pinning its hopes on the current political paralysis meaning that Britain will leave the EU in 15 days with No Deal and on World Trade Organisation terms. But last night’s vote makes that a pipe dream.

One senior ERG member said stubbornly: ‘The legal default position remains that we leave on March 29 and if there is no withdrawal treaty agreed by Parliament, we leave with No Deal.’ But they are misguided. After last night’s Commons vote, the Government can change the March 29 exit date – by using a legislative device called a ‘statutory instrument’ – as long as the other 27 EU countries agree.

For his part, Rees-Mogg is aghast at the prospect of MPs taking control of the Brexit – or No Brexit – process from the Government. In response, he’s suggested the Queen could use a precedent set in the reign of William IV to close Parliament down. 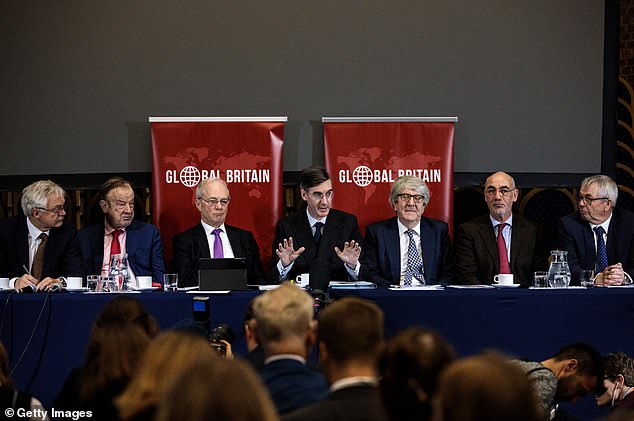 Jacob-Rees-Mogg MP (centre) and other members of the European Research Group (ERG) who favoured a No Deal Brexit over relatively softer terms being proposed by Mrs May. The ERG is pinning its hopes on the current political paralysis meaning that Britain will leave the EU in 15 days with No Deal and on World Trade Organisation terms

He says: ‘In 1832, there was an occasion when it was thought necessary that the King might have to come in person to dissolve Parliament. If the King turns up in person to prorogue [close down] Parliament, any discussion stops straight away.”

This idea from the man mocked as ‘the Honourable Member for the 18th Century’ was greeted with derision.

Two hours before Tuesday’s Commons vote, the ERG had held a private meeting in Parliament to discuss tactics.

One of the most passionate speeches came from former Brexit Secretary David Davis who said he feared that a defeat for Mrs May would plunge the country into a period of uncertainty which could result in Britain staying in the EU.

He urged ERG members to vote for the deal.

‘David hates Mrs May’s deal, but he hates even more the idea that the Brexiteers kill off Brexit,’ said a MP who was present. Some heeded Davis and, like him, voted for the deal.

While 39 MPs switched sides, a hard core of 75 ultra-Brexiteers refused to budge. One ERG member said: ‘I can’t vote for the deal ever, because it’s worse than staying in the EU.’

No wonder I heard one Tory MP referring to ERG members as ‘block-headed ideologues’.

Lord Finkelstein, a Conservative peer who voted Remain, has said: ‘All they had to do was vote for the deal and Brexit would have been secure. Now, it isn’t.’

Undaunted, Rees-Mogg is continuing to defy logic, saying: ‘Only if Brexit is at risk altogether will we consider voting for what is still a bad deal.’

But the brutal truth is that Brexit is now very much at risk.

The ERG faces a simple choice: back Mrs May’s deal or the Government will seek a long extension that includes Britain taking part in the elections for the European Parliament in May. Not exactly what Brexiteers expected after their referendum triumph!

Surely Rees-Mogg won’t want ‘The man who killed Brexit’ as his political epitaph?