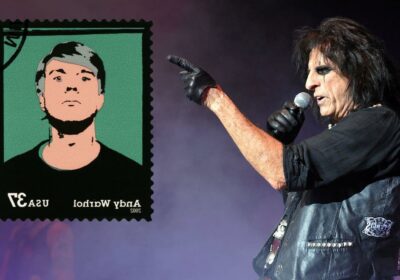 Several years ago, Alice Cooper, found several years ago an unauthenticated art piece by Andy Warhol valued at $2.5 million–$4.5 million in his Arizona home, after it had been hidden away in his garage for over 40 years.

The 73-year-old rock star and lead singer of the legendary band of the same name – Alice Cooper – made an incredible discovery when he found an Andy Warhol silkscreen of an electric chair in his garage.

The rare piece, titled Little Electric Chair, had been in storage in Alice Cooper’s Arizona home for approximately four decades. The iconic musician only found it around 2017, before making the recent decision to auction it.

Alice Cooper explained in a press release that he had met the legendary artist while living in New York City, when he was “becoming the scourge of rock n’ roll” and that he had “attracted the whole Warhol crowd”.

According to the glam rock star, Andy Warhol had met him at a party. As Alice Cooper’s story goes, Warhol gifted the musician with the painting by the end of that evening.  Alice Cooper has estimated the art piece to be worth $2,500 at the time.

The groundbreaking electric chair painting’s value has since significantly increased. As a result, Alice Cooper has commissioned Richard Polsky, a well-established art dealer to authenticate the unsigned work.

According to the dealer who works for a Scottsdale firm, the piece was completed in either 1964 or 1965. These years correspond to a period of time, where Andy Warhol would meet celebrities at nightclubs and take photographs and make movies of his nightlife.

Alice Cooper explained that the vibrant red painting, which is based on a press photo from the 1950s of the death chamber at Sing Sing prison, had “lived by itself for many years”.

“We took it out and had it looked at with the intention of displaying it, but then I just decided it was time to move on, time to release it to the world,” Cooper said.

The acrylic and silkscreen canvas depicts Julius and Ethel Rosenberg place of execution, after both were convicted for conspiring to pass atomic secrets to the Russians.

Alice Cooper’s state-of-the-art piece will be auctioned this October 23, 2021, at Scottsdale’s Larsen Gallery in Arizona. If Little Electric Chair amasses its appraised value of $2.5 to $4.5 million, it could earn its special place in the history of Arizona as the most expensive piece of artwork to ever sell in the state.

Read Next: Michael Jackson’s Neverland Statues Up For Sale For $2.5 Million