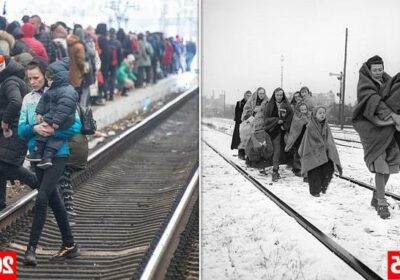 ALEX BRUMMER: Britain saved my dad from hell in Eastern Europe. Let’s show today’s refugees in Ukraine that we still have a heart

Some two decades have passed since I made the emotional journey with my father and other family members to his childhood home in western Ukraine.

When we got there, we found a modest red-brick and stucco building still known locally as the ‘Brummer House’.

Seeing it for the first time from the deserted street outside, I felt a well of emotion – not just because it represented so important a part of my family’s story, but also because it was a stark reminder of how war in Europe had destroyed lives, turned friends into enemies and vaporised entire communities.

For many years when my grandparents lived there, it had been a place of domestic bliss and tranquillity. The kitchen was where my grandmother Fanya would fill rolled cabbage leaves with meat, rice and spices.

In the garden my grandfather Sandor would sit on Sabbath afternoons under the shade of a peach tree, teaching the children stories from the Old Testament.

But this harmonious, contented life was shattered by the Nazis and their collaborators. My grandparents were rounded up and perished in concentration camps along with three of their sons. 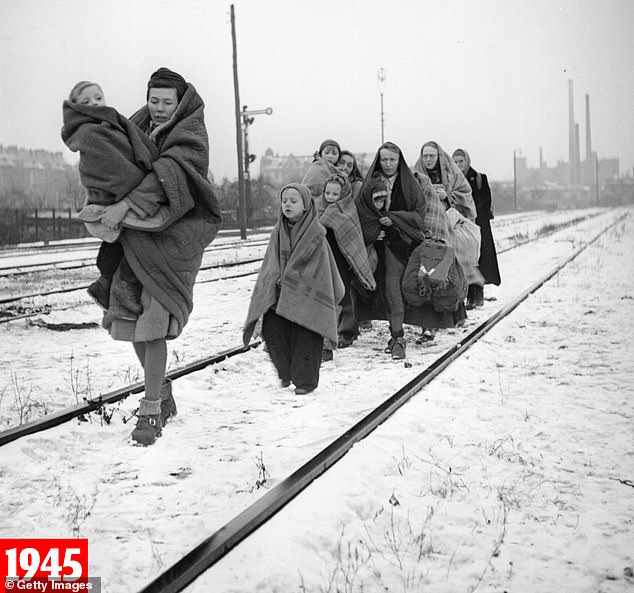 A handful of survivors from the 150 refugees who left Lodz in Poland two months earlier, headed for Berlin. They are following railway lines on the outskirts of Berlin in the hope of being picked up by a British train

It was only thanks to the generosity and kindness of the British people that my father survived. After crossing a Europe at war, he managed to escape the Holocaust, arriving in Britain as a penniless refugee.

The despairing scenes this week of young, elderly and vulnerable refugees streaming across the borders of Ukraine in search of safety brought to mind all this suffering from the past. For me it was a jolting and deeply felt reminder of how my father fled Ukrainian territory. Many of his family were forcibly removed from their homes during World War II.

The Daily Mail and Mail on Sunday UKRAINE REFUGEE APPEAL

Readers of Mail Newspapers have always shown immense generosity at times of crisis.

Calling upon that human spirit, we are now launching an appeal to raise money for refugees from Ukraine.

For, surely, no one can fail to be moved by the heartbreaking images and stories of families – mostly women, children, the infirm and elderly – fleeing from Russia’s invading armed forces.

As this tally of misery increases over the coming days and months, these innocent victims of a tyrant will require accommodation, schools and medical support.

All donations to the Mail Ukraine Appeal will be distributed to charities and aid organisations providing such essential services.

In the name of charity and compassion, we urge all our readers to give swiftly and generously.

TO MAKE A DONATION ONLINE

Via bank transfer, please use these details:

TO MAKE A DONATION VIA CHEQUE

Seeing those pictures of frightened people – women, children, brothers and sisters all brutally uprooted from their happy family lives – reinforced my view that we must do all in our power to help them. Our shock, horror and anger at their treatment will I am sure help us rediscover the extraordinary British trait of generosity that so staggered my father when he was welcomed here. And what better way of displaying that generosity than contributing to the Mail’s Ukraine Refugee Appeal?

As Vladimir Putin launched his barbarous assault and the skies lit up over Kyiv, I became tearful when I tried to talk to my wife Trici about the invasion. My voice trembled and words became trapped.

The scenes of dislocation and desolation seem totally incongruous in a post-Cold War era. Yet they are all too reminiscent of what has gone on before in that part of the world.

The tragedy, hardship, torture and murder which befell my own family in the 1930s and 1940s was something I only gradually became aware of as I was growing up.

For much of my early life, the horrors they endured had been shrouded in a deep silence. What I did know came only from whispered conversations when surviving siblings – who had scattered to all corners of the world – came together for family reunions.

In time I gradually came to learn about my family’s hometown of Tiszaujlak (known as Vylok in Russian). It sits close to the Tisza river where on balmy summer days my grandmother liked to swim.

It is now in Ukraine, but that part of the world has been fought over so many times that it has also been part of Czechoslovakia, Hungary and the Soviet Union.

It was in 1938, as the grip of Nazi Germany tightened across Europe, that my father decided to come to Britain and join his elder brother Philip, who was by then a rabbi in Merseyside.

Shortly before he left, he was beaten up by fascist thugs at the local railway station.

After making his way through a Europe already at war he eventually arrived at London’s Victoria station – and, by accident, found himself in the women’s waiting room. There, he was befriended by an ‘elegant English lady’ who helped him across the city and put him on a train for Liverpool.

From that single act, he developed a lifelong admiration for British kindness. Back in middle Europe, Hungary’s sympathies with Hitler ironically protected some of the family from the worst of Nazi atrocities, since the Jews from that area were not shipped off to the death camps until June 1944 when Adolf Eichmann was charged with liquidating the Jewish communities.

Three of my father’s brothers were recruited into work camps. At first there were letters, and food and clothing parcels were dispatched to them. But after 1942 they were never heard of again.

In 1944 Sandor and Fanya, their two young daughters Rose and Sussie and granddaughter Shindy were shipped off to Auschwitz. As the family left the town on cattle trucks they begged for water from friends and neighbours. Salt was thrown at them. 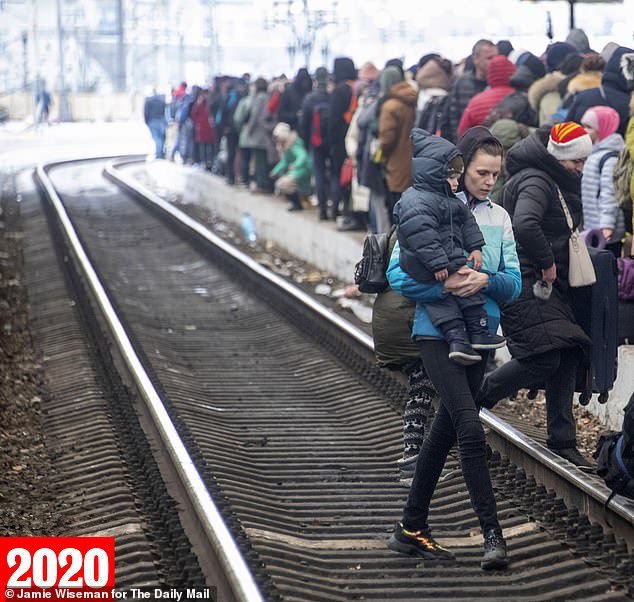 My grandparents were consigned to the gas chambers. Miraculously my two aunts and cousin survived, and were rescued by the Swedish Red Cross.

In the months spent in the death camps, freezing in rough cotton garments, they underwent enormous privations and unspeakable procedures at the hands of the Nazis.

A younger brother, Martin, was transported to Theresienstadt, a transit camp for Jews, and on to an odyssey of work camps. When he and a friend tried to escape they were captured by guards and tied to the railway tracks. As a locomotive approached they were cut free with seconds to spare.

When the war ended and Martin was freed, he was the only member of the family to head home. By now the post-war carve-up of Europe meant my father’s childhood home was in the Soviet Union and occupied by the Red Army.

Martin met a childhood sweetheart, Rosie. They decided there was no future under Soviet control – the cattle from the farm perished and the town became a ruined backwater.

And so the next time a Brummer visited Brummer House was that visit I made with my father, my late brother Daniel and first cousin Shindy in 1997. It was after my mother died and he expressed a wish to return.

We knocked on the door and were initially treated with suspicion by its residents, who thought we had come to reclaim property. They were persuaded in Hungarian that we meant no harm and were interested only in a little family background.

There is no shortage of history in those parts, much of it bloody. But as terror once again visits Ukraine, I’d rather dwell on the redeeming qualities of human nature. The compassion in the face of pain and suffering. The many small acts of kindness meted out to those in need. And, of course, the generosity of Mail readers when confronted by the plight of a benighted people.