Selma Blair and Candice King are two of the four stars leaving the YA franchise.

The “After” production team has revealed they have recast four roles for the film’s upcoming sequels.

On Wednesday, the franchise announced they had replaced several actors for the third and fourth installments — “After We Fell” and “After Ever Happy” — in order to film during the coronavirus pandemic. 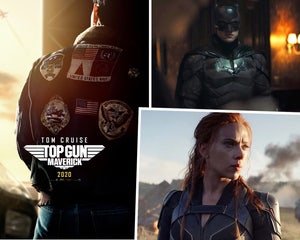 All The Movies Releases Pushed Back Because of Coronavirus

Chance Perdomo has replaced Shane Paul McGhie as Landon, while Mira Sorvino has taken over the role of Carol from Selma Blair.

It was also announced that “Famous In Love” star Carter Jenkins will be joining the cast for “After We Fell” and “After Ever Happy” and will be playing Robert, who is reportedly a new love interest for Tessa (Josephine Langford.)

In a lengthy statement posted on the “After” movies’ Instagram account, the production team explained their decision to recast multiple roles, while also revealing the new stars who would be joining the cast.

“Dear Afternators, It was important to us to finish telling Tessa and Hardin’s story in a timely manner, and given the challenges posed by the Covid19 pandemic, we had to make some difficult choices,” the statement began. “At the end of the day, these choices were all in service of protecting the cast and crew and doing our best to deliver you, the Afternators, the best fans in the world, the best possible movies.”

“We chose to shoot in Eastern Europe because the COVID numbers are far lower than where we shot movies 1 & 2 and this safeguards our cast,” the message continued. “We are also shooting the films back to back, which means some of the original cast were not available to return for various reasons, whether it be scheduling or other commitments.”

“They are wonderful actors and will be missed, however, we think you’re going to be really pleased with the immensely talented group that have chosen to take the roles.”

The post went on to reference photos of lead actors, Hero Fiennes Tiffin and Langford, who star as Hardin and Tessa respectively, wearing masks on the set, assuring the production is “taking every precaution to protect our team.”

The statement concluded, “We know these last few days have raised a number of questions about our choices, and we wanted to explain it as best we can to you, because after all, we are making these movies for you. With that in mind, we wanted to share our new cast with you directly, first.”

In addition to the message, the post also featured a behind-the-scenes photo of Tiffin, Langford and Perdomo on set. According to Just Jared Jr., “After 3” and “After 4” are filming in Bulgaria.

The “After” film franchise is an adaptation of Anna Todd’s book series of the same name, which is based on a Harry Styles Wattpad fanfiction. The second film, “After We Collided,” is out later this month.

“After We Collided” hits theaters, digital and on-demand on October 23.