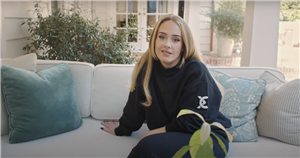 Adele has made a huge return with her latest single Easy On Me and announcing new album 30, which is set to be released later this year.

The superstar singer has broken records with her latest single, as she continues to top the charts.

As part of her highly anticipated return to the limelight, Adele has also graced the cover of both Vogue and British Vogue, marking her first interviews in numerous years.

Following on from the covers, she has also taken part in Vogue's 73 Questions series, in which she takes the magazine on a tour of her huge LA mansion.

Adele showed them around her stunning kitchen and living room, before showing off a framed piece of Celine Dion's gum, leaving fans in hysterics.

As the tour continued and she answered the quick-fire questions, Adele took the cameras into the extensive garden at the £7million mansion.

The cameras showed a huge play area made out of wood, complete with colourful peep holes and a slide.

The impressive play set is for her son Angelo, who she shares with her ex-husband Simon Konecki.

It appears the set wouldn't look out of place at a royal home, with the garden facility believed to be a popular choice amongst members of The Firm.

Meghan Markle and Prince Harry are believed to have a huge playground for their two children, Archie and Lilibet, at their Montecito home. The play area features two slides, a climbing wall, and a helter skelter amongst other fun apparatus.

Prince Harry and Prince William also had a personal play area when they were children, with their former childhood home of Highgrove House featuring a huge climbing frame and slide.

After giving fans a glimpse of the impressive play area, Adele stopped to sit down on her luxurious patio area.

Featuring a huge white seating area complete with blue scatter cushions, the songstress continued to work her way through the 73 questions. The camera then shows a huge line of shrubbery and plants, which she explains acts as a separation between the house and the pool.

While Adele and Angelo look to be living the dream over in LA, the singer did also reveal that her favourite home she's ever lived in is still her modest London flat where she spent her teen years with her mum.

For all the latest celebrity gossip, sign up to our daily newsletter here .