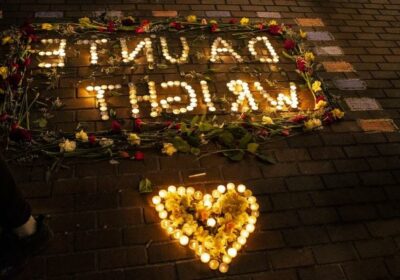 Brooklyn Center, Minneapolis Mayor Mike Elliot and many others are calling for police officer Kim Potter to be terminated after she shot and killed Daunte Wright, 20, during a traffic stop on Sunday, April 11. Wright was apparently targeted because he committed the heinous crime of having expired tags (during a pandemic, when DMVs are barely functioning) and air freshener hanging in his rear-view mirror.

Potter has been placed on administrative leave following the fatal incident. The Brooklyn Center police chief said he believes the shooting was an accident because Potter claimed she thought her gun was a taser. However, putting Potter’s outrageous incompetence aside, I’m alarmed by the reason why Wright was targeted and lost his life. He was on the phone with his mother after getting stopped by officers, and he told her that he was in trouble with the law because he had air fresheners hanging from his rear-view mirror. According to the Brooklyn Center Police Department, he was pulled over for the air fresheners and expired tags. At that point, officers discovered Wright had a warrant out for his arrest due to a missed a court date. Wright, at some point, was ordered out of the vehicle. When officers tried to arrest him, he re-entered the vehicle. That’s when Potter shot the Wright in front of his girlfriend, who was a passenger in the car. Wright’s vehicle then traveled for several blocks before crashing into another car. He was pronounced dead on the scene.

This 20-year-old man/child lost his life because of what exactly? Air fresheners, expired tags and a misdemeanor warrant? He clearly wasn’t a threat to officers, so why did they decide to pull out tasers and guns? The truth is that those officers decided Wright was a criminal before they even noticed the air freshener and before they ran his tags. His Blackness automatically made him their worst nightmare.

Cops famously bought Burger King for Charleston church shooter Dylann Roof following his 2015 arrest. His monstrous behavior didn’t stop cops from seeing Roof as a human being deserving of compassion. African Americans, on the other hand, lose their lives for much less while posing no threat to law enforcement. I’m sure you remember Eric Garner, the 43-year-old man who was killed in New York for selling lose cigarettes in 2014. That same year, 12-year-old Tamir Rice was killed by Cleveland, Ohio police officers while playing with a toy gun. Just a year later, in 2015, Sandra Bland, 28, was found hanging in her Waller County, Texas jail cell, days after being booked for not using a turning signal. Then there’s Philando Castile, a 32-year-old man who was shot and killed by Minneapolis police officers in 2016 after being pulled over for a broken taillight and alerting officers that he had a legal firearm in his car. Fast forward four years to Officer Derek Chauvin and three other officers getting charged with killing 46-year-old George Floyd over a counterfeit $20 bill.

This has got to stop. Black lives matter and we demand accountability. A failure to hold Potter criminally responsible for killing Wright, accidentally or otherwise, amounts to further proof that Black people will never be safe living in America.