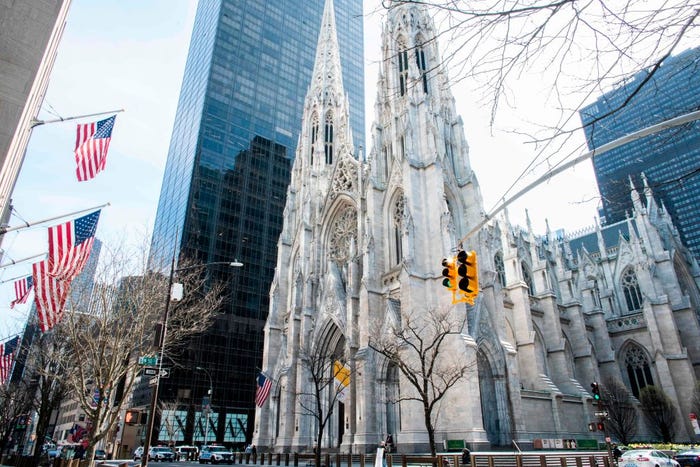 A high-profile New York couple is facing criticism after The New York Times published an article about their October wedding, which took place indoors with 200 guests in attendance.

Jonathan Morris, 48, a news analyst for Fox News, and Kaitlyn Folmer, 37, a producer and reporter for ABC News, say that their guests wore masks and were socially distanced.

Morris and Folmer first met in 2013 but didn't have their first date until June 2019. A year later, they got engaged at the Fairmont Grand Del Mar resort in San Diego.

Folmer told The New York Times: "When you know, you know. With Jonathan I just knew. He was that unforgettable."

The wedding took place at St. Patrick's Cathedral in New York, an old workplace of former priest Morris, on October 17.

Cardinal Timothy M. Dolan, the archbishop of New York, greeted the couple after the wedding, which was officiated by Msgr. Robert T. Ritchie, rector of the cathedral.

According to the article, social distancing was maintained by only having guests sitting on every third row, with designated pews marked out by floral arrangements.

After the ceremony, there was a "meet-and-greet reception" at 15 Hudson Yards' Skytop, followed by an outdoor dinner for 50 people at Winged Foot Golf Club's outdoor terrace in Mamaroneck, New York, a suburb northeast of New York City.

As of November 13, indoor and outdoor gatherings at private residences in New York State are limited to no more than 10 people, but guidelines in October allowed for up to 50 guests to attend a wedding reception.

New York State has had 563,690 confirmed cases of the coronavirus since the pandemic began and 34,054 deaths, according to Johns Hopkins University.

Photos of the nuptials on social media suggest masks were worn, but not by all guests, and not all wore them over their noses as well as mouths.

Many people have tweeted their disapproval, with criticism directed both at the couple and The New York Times for covering the story.

"The whole 'people wore masks and socially distanced' stuff doesn't hold up when you include photos that show just how untrue that was," wrote Media Matters For America editor-at-large Parker Molloy.

She continued: "It's bad enough that people are so selfish that they're putting countless others at risk just to throw themselves a party without a gigantic newspaper writing a story about how great it was."

"Clearly The NY Times thought the stature of the participants made this 200 person event special," tweeted director of Marist's Center for Sports Communication Jane McManus.

McManus tweeted a photo of the couple in the cathedral, neither of whom were wearing masks.

A New York Times spokesperson told Insider: "The vast majority of weddings and relationships we cover have been profoundly affected by the pandemic, including by illness and tragedy. Across America, people are making diverse and complicated choices, from postponing and canceling weddings to limiting their size to rushing ahead for medical or legal reasons."

Read the full report on The New York Times