Jeremy Sims didn't intend to make a COVID movie when he signed on to direct the 2015 Icelandic film Rams. But circumstances conspired to ensure he did, kind of.

"I could feel it was coming," he says of the disease that has upended every aspect of our lives in 2020, "and I decided this was going to be my contribution to world health, to show what can happen if we really do socially distance living things in the midst of a pandemic. We can survive and go on with the help of community spirit." 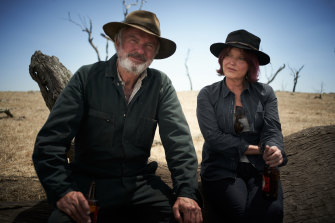 Sam Neill and Miranda Richardson in a scene from Rams, directed by Jeremy Sims.Credit:Roadshow

He's joking of course. Like everyone else, he had no idea what was coming, certainly not in December 2018 when I visited the West Australian set and, later in the day shared a pint with the Perth-born actor-turned-director in a pub just outside the former whaling port of Albany. Nor did he early this year, when the film was slated for a May release.

As cinemas around the country shut it was bumped to August, and then again to October. Now, with open-air cinemas able to operate in Victoria while indoor cinemas stay closed, Melbourne audiences can finally see it.

In Grimur Hakonarson's original, which won the top prize in the Un Certain Regard section at Cannes in 2015, brothers Gummi and Kiddi live side by side but haven't spoken for 40 years. Though billed as a comedy, it is a bleak (albeit beautiful) piece of work that ends tragically in a blizzard.

Sims' version, which stars Sam Neill as Colin and Michael Caton as Les – with English actress Miranda Richardson as the local vet – lightens the tone, broadens the reach, and leaves audiences with a little glimmer of hope, despite swapping bushfire for snowstorm. But the core story remains the same: a disease infects the sheep of the valley, health authorities issue a strict order to destroy all the animals in order to protect other regions, and one brother decides he won't have a baa of it.

Whether that makes him the hero or the villain of the piece is very much open to interpretation.

"Human beings very rapidly turn necessity into bureaucratic authoritarianism," says Sims. "It's constantly a danger in a situation like this, that we overstep the mark and we trash our freedoms at the same time.

"I'm not saying where I stand on that argument completely, but I understand Colin saying, 'Look, you don't need to wipe out every single sheep in the entire valley; I'm going to isolate some because I love them and I trust my ability to look after them, and I'm not prepared to just let them be sacrificed'.

"Maybe he's not right; maybe there will be people watching the film saying 'you have to kill your sheep'. I think people will be divided about whether he does the right thing or not, because the potential is always there that he does infect the next batch and they have to take two years longer to clean the valley." 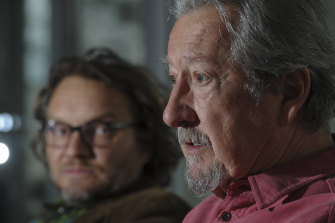 Sims, left, with Michael Caton, who also starred in the director’s 2015 film Last Cab to Darwin. The pair first worked together on the late-night soapie Chances in the early 1990s. Credit:Graham Tidy

If the events of this year have inadvertently made Rams a political tale, in another respect it was always going to take a stand, COVID or not.

The director of Beneath Hill 60, Last Cab To Darwin and the documentary Wayne (about motorcycle champion Wayne Gardner) cites former British prime minister Margaret Thatcher's maxim "there's no such thing as society" as the windmill against which he repeatedly tilts.

"Most of my films are a rebuttal of that sentence," he says. "There are things in this film that seem particularly prescient, but the message that you can't live on your own, without the love and goodwill of the people around you, that you can't really be happy without community, is at the core of nearly all my films."

Rams is now screening at the Elsternwick Classic, Lido and Cameo Belgrave rooftop cinemas and at the Palace Westgarth courtyard cinema.