A long view of history While visiting the Flinders Ranges last year, artist Mariana Castillo Deball was fascinated seeing what she describes as a sort of lasagne – a layering of sediment from what was once an ocean-filled seabed in this now-arid landscape. There among the layers Castillo Deball was shown traces of organisms – tiny entities that have brought into question the way life has evolved. 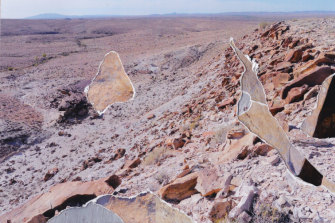 The soft-bodied organisms – the oldest known examples of complex, multicellular animal life on Earth – are known as Ediacaran biota. They lived somewhere between 541 and 635 million years ago, an age so incredibly far in the past we can hardly comprehend it. For Castillo Deball, the challenge has been to project her imagination back through that immense distance in time and re-formulate as art works the associated complex histories and ideas.

Enter her extraordinary new installation at the Monash University Museum of Art (MUMA) and it is clear this Mexican-born, Berlin-based artist has immersed herself in the adventure. In Re-playing Life’s Tape, Castillo Deball has taken the ancient “lasagne” of sedimentary strata, given it new life and invited us to physically enter into its many folds.

While we usually view geological sedimentary layers as cutaways sliced from the side like a Christmas ham, and presented in a natural history museum context, Castillo Deball makes us look afresh in the art space. “It is as if she has taken the strata of the subterranean and flipped it from horizontal to vertical,” says Hannah Mathews, MUMA’s senior curator. Thus, we can walk through the sedimentary layers in such a way that ideas about deep, deep time and life’s journey through it become a bodily experience.

Mathews describes the work as a sort of diorama or tableau composed of montages. These photographic records and other images were collected during Castillo Deball’s site visit and subsequent research – but Re-playing Life’s Tape is neither documentary nor science lesson. It is an art experience, with the imagery printed on mesh-like signage fabric that is partly transparent, with occasional perforations so visitors can look through the panels at selected points. 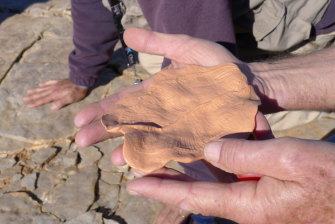 The towering scale of this artist’s curving, ceiling-high work means we might feel microscopic, as if we were ourselves the Ediacaran biota negotiating our way through a deep-sea labyrinth. In another component of the exhibition that ribbons between separate gallery rooms, Castillo Deball uses data to bring into the foreground various scientific perspectives that have come into contention about where the biota fit into the Tree of Life, the formal system used to graphically represent the branching stages of evolution. Castillo Deball’s work emphasises the collision between this traditional approach to scientific classification with more contemporary genetic mapping/forecasting.

While Castillo Deball is not a scientist, she has been exploring the meanings of subject matter in palaeontology for about 20 years. It was in 2016 that she was commissioned by MUMA to create the new works now being exhibited – so she chose an Australian context for her interests and made the visit to the Flinders Ranges. There, she was a guest of the South Australian Museum, accompanied by its palaeontologists and other scientists. The SA site is on private land in the Ediacara Hills, and the science teams have an arrangement to visit there for a specified period once a year.

The first biota were discovered in the Ediacara Hills in 1946, and the Ediacaran Period was officially recognised as a new geological age in 2004. The SA Museum’s field research at the site has involved excavating areas of fossil seafloors where the Ediacaran soft-bodied creatures lived on microbial mats. Because they were smothered by sand, they were eventually preserved as mineral imprints in sandstone layers. The fossils retrieved are the moulds and casts of their squashed bodies.

Castillo Deball says the site was so special because she could see the large fragments of seabeds that have been excavated. “They are large surfaces where you can see how the bottom of the ocean looked and how the fossils were settled in it,” she says.

During her research, she was told the Ediocaran biota are controversial, being difficult to fit into the accepted evolutionary story– she describes them as a “bubble in the history of life”. Helping to explore this is her colleague and friend, the evolutionary biologist Gabriela Aguileta, with whom she has had many conversations about palaeontology.

In an essay about the Ediacaran era written for the MUMA show, Aguileta writes that scientists cannot quite agree to what extent the Ediacaran biota gave rise to the ancestors of today’s species, which is a difficulty when trying to fit them into the conventional Tree of Life. The Ediacaran biota are “so weird and unlike anything else we know”, she writes, that scientists are still debating how and why they were wiped out – and whether some of them may have persisted into the next geological age, the Cambrian Period, when diverse multicellular life as we know it exploded on to the scene.

Castillo Deball, though, says that the single examples of the fossils were not her main focus while doing the research and site visits. “I was more interested in the entire picture of what is going on … how science has built this evolutionary tree, how they decide which species are related to which. It was a kind of challenge I had to solve for the work.”

Her art works, including lino prints she is making on her arrival in Australia ahead of the exhibition,  have little to do with the site itself. “I wanted to speak about how to explain something that can be lost in time and not able to connect itself to anything,” she says of the biota fossils. “The possible connections are there, but the lines have not been traced. I have been trying to imagine how the world looked at that time. There have been so many attempts to reconstruct that world.” 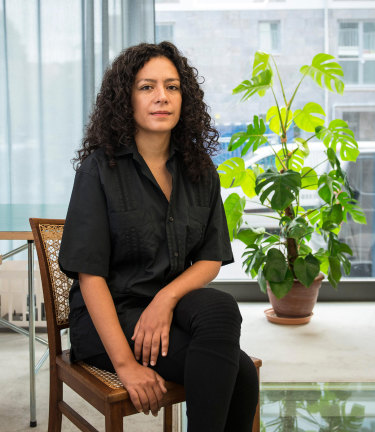 Mariana Castillo Deball has been exploring the meanings of subject matter in palaeontology for about 20 years.Credit:Michael Dannis

Mathews describes Castillo Deball as an artist who has the skill of being able to bring scientists and researchers from a variety of different silos into conversation with each other, through her own research and site visits, as well as through her art work responses.

This brings new perspectives: humans, Mathews says, have a desire to pin things down and categorise them – but the conversations Castillo Deball is espousing are about “slipperiness” and how the fluidity and multiplicity of things simply need to be embraced as constant factors.

“Genuinely we are in a time where the linear, where the dominant narrative and understandings, the funnelling of things, is not acceptable anymore,” Mathews says. “It is an exciting time – and that is why so many artists are working in this space, asking how do you hold this multiplicity, or give form to it, or manifest it, without making it binary again? The world becomes bigger and more open, more questioning, challenging and experimental when you’re open and looking.”