17 Brand New Holiday Songs To Add To Your Playlist Everyone knows the holiday classics… check out these new songs this year!

While things are a little different this holiday season, one thing hasn’t changed – the holiday music! And because of that, you might find yourself listening to the same Christmas tunes over and over… and over.

When you decide you can’t listen to “All I Want For Christmas Is You” one more time, tons of artists have dropped new music this season to help you change things up a bit. From chart topping musicians like Pentatonix and Kelly Clarkson to newer stars like social media celeb Dixie D’Amelio, these artists have got you covered.

Listen to some new tunes you should be adding to your playlist this year, below.

1. “I Need You Christmas” by Jonas Brothers

The JoBros are back with a new holiday tune after the success of last year’s “Like It’s Christmas.” Their new original tune is sure to tug on your heartstrings and inspire slow dancing in the living room.

Meghan Trainor teamed up with Earth, Wind & Fire on “Holidays” off of her new Christmas album “A Very Trainor Christmas.” The upbeat original song is just one of 18 tracks on her holiday release, which also includes six originals and classics like “Last Christmas.”

Lil Nas X dropped his first Christmas song “Holiday” this season and it’s already racked up over 44 million streams on YouTube. The wild music video sees Nas taking over the role of Santa Claus 200 years in the future.

4. “Here This Christmas” by Gwen Stefani

Gwen Stefani’s latest Christmas song is serving as the soundtrack to Hallmark Channel’s Countdown to Christmas! The original was penned with the help of OneRepublic’s Ryan Tedder and was released as part of the reissue of Gwen’s “You Make It Feel Like Christmas” album.

5. “Thank You” by Pentatonix

Pentatonix rules the holiday charts and 2020 will be no exception! The a cappella group dropped their sixth holiday album “We Need A Little Christmas” this year and “Thank You” serves as one of the standout tracks. The inspiring song features their signature harmonies as well as a hint of “Jingle Bells!”

TikTok superstar Dixie D’Amelio teamed up with Liam Payne for a Christmas collaboration! Liam, who dropped “All I Want (For Christmas)” last year, and Dixie duet on the flirty track which is all about getting in a little bit of holiday trouble.

Ally Brooke is no stranger to holiday tunes, as she’s released her own versions of “Last Christmas” and “Santa Claus Is Coming To Town.” This year, she dropped her first holiday original, which she got the chance to perform in the Macy’s Thanksgiving Day Parade.

8. “Under The Mistletoe” by Kelly Clarkson & Brett Eldredge

Kelly Clarkson, who has become a Christmas legend since the release of “Wrapped In Red” in 2014, teamed up with country star Brett Eldredge for a new song this year. “Under This Mistletoe” is sure to become Kelly’s next Christmas hit!

Tori Kelly’s holiday original, “25th,” is off of her new album, “A Tori Kelly Christmas.” She even got to perform it in the Macy’s Thanksgiving Day Parade! The album includes several original tracks as well as covers of classics like “O Holy Night” and “Silent Night.”

Country duo Dan + Shay just dropped their first original holiday song, “Take Me Home For Christmas.” The romantic tune is all about heading home for Christmas with your loved one for the first time. Back in 2014, Dan + Shay also released their own version of “Have Yourself a Merry Little Christmas.”

11. “How Could This Be Christmas” by Mandy Moore

Mandy Moore’s new Christmas ballad “How Could This Be Christmas” is fitting for 2020 as it’s all about experiencing a holiday season that’s a little bit different than usual. Mandy’s song hints at something being missing from the festive celebrations without getting too specific, leaving room for interpretation.

12. “Christmas Without You” by Ava Max

Ava Max’s holiday song “Christmas Without You” is also about the season being different but because of a special someone who can’t be around.

13. “It’s Not Christmas Till Somebody Cries” by Carly Rae Jepsen

Carly Rae Jepson’s new song “It’s Not Christmas Till Somebody Cries” is a little bit too real! While the song’s melody is upbeat, it acknowledges that there’s lots of things that can go wrong during the holiday season like family arguments, dinner dilemmas and a little incident with grandpa.

14. “A Grouplove Christmas” by Grouplove

Alt-rock fans will love “A Grouplove Christmas,” the band’s first Christmas ballad which is about wanting to spend the holiday season with the person you love.

Holiday music experts Carrie Underwood and John Legend teamed up for a song on Carrie’s new Christmas album “My Gift.” The duo performed a stunning original titled “Hallelujah” for the album, which also includes traditional songs like “Silent Night” and “Have Yourself a Merry Little Christmas.”

Country duo Maddie & Tae dropped “We Need Christmas” as part of their holiday EP of the same name. The release also includes other originals like “Merry Married Christmas” as well as classics like “Holly Jolly Christmas” and “O Come All Ye Faithful.”

Florida Georgia Line gives the holiday season a fun twist in their new song “Lit This Year” which is all about having a good time – and a few drinks! 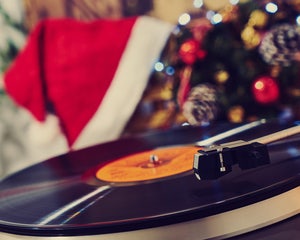