Home » Fashion » What does “dressing for yourself” really mean?

What does “dressing for yourself” really mean? 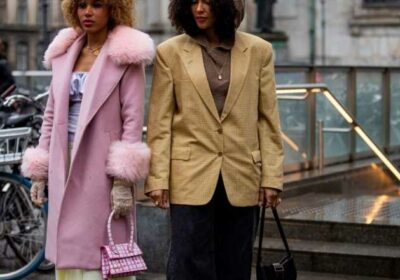 Written by Naomi May

Véronique Hyland, the woman who coined the term ‘millennial pink’, has published her first book, Dress Code, and it’s full of fashion-focused myth-busting. Here, Stylist shares an exclusive extract that explores what dressing for yourself actually means.

Women who dress completely for themselves are truly rare – most of us have an audience in mind, whether that is men, other women, or some permutation of both. Generally speaking, though, another woman is more likely to be attuned to the vagaries of fashion, to appreciate the footnotes behind your outfit, to start a dialogue with you because of a “conversation piece” you’re wearing. Fashion is a playing field where women compete but also intersect, a locus of the intra-female fascination that builds up between women.

You might even say that women no longer need to dress for men, that we’ve evolved past that historical moment. It’s certainly true that as women carve out more power and independence, fashion tends to follow. In the wake of the #MeToo movement, fashion has become more covered up, with “ugly-cool” styles adamantly designed not to appeal to straight men and instead focused on the comfort of the wearer: to wit, the hipster housedresses of Batsheva, the loose jumpsuits and wide-legged pants of Rachel Comey. Some female designers have reimagined fashion in a more female-friendly, comfort-oriented image, though those standards can be, in some ways, just as restrictive as the previous ones.

What does it mean to dress for yourself, and can we ever really toss aside the preconceptions of others and our desire to appeal to them? While fashion is thought of as a female-dominated industry, for the majority of its history men have primarily designed the clothes that women wear and dictated fashion trends from atop an ivory atelier. A kind of male gaze has been inherent in styles from the hobble skirt to the bandage dress – would someone who had to walk in them have designed either of those garments? Now that trends are less top-down and more self-generated, that’s starting to change: a woman who’s been living in No.6 clogs and Birkenstocks may convert to a kitten heel, but she probably won’t adopt towering stilettos just because someone tells her they’re back in style this season.

Véronique Hyland is Elle’s Fashion Features Director and the author of Dress Code.

As female designers have become more prevalent, there is a tendency to affix the “female gaze” label to their work. But are female designers really more tuned in to what women want? Not necessarily. The gender essentialism of that statement doesn’t sit well with me, not to mention that there are plenty of female designers who don’t seem to know what a woman is shaped like. The idea that female designers are simply designing for themselves, unable to imagine beyond that sphere, feels too pat and limiting.

Still, there is a cohort of women designers who have either pushed back against the male gaze, using fashion almost as a form of violent satire, or made women’s clothing more practical and liveable. Comme des Garçons’ Rei Kawakubo sits in the first category. She and Phoebe Philo, formerly of Chloé and Celine, seem to be the two living designers most credited with the “female gaze” approach. Kawakubo subverted the idea of the female body with her spring 1997 “Body Meets Dress, Dress Meets Body” collection, which became colloquially known as the Lumps and Bumps collection. It incorporated padding beneath the surface of innocent-looking dresses that, rather than moulding the body into some “ideal” shape, rendered it surreal: hunched backs, globular hips, exaggerated derrières. To some critics, it was grotesque, evoking disfigurement and disease. Some fashion magazines elected to shoot the clothes with the padding removed. But for Kawakubo, it was a way of reinventing the relationship between the wearer and the worn. “I realised that the clothes could be the body and the body could be the clothes,” the designer has said. Kawakubo has also used her collections to explore rituals, both social and biological, that are unique to women’s lives.

While couture shows traditionally end with lamariée, the beautifully attired bride who closes out the proceedings, Kawakubo has used her shows to confront topics that aren’t usually a subject for fashion. Her 2014 “Blood and Roses” collection included white garments that looked soaked in blood, evoking menstruation, childbirth, and death. “Broken Bride” (2005) explored weddings, but in a different light than the triumphant couture-show end-point. “There are many kinds of marriages,” the show notes declared. “Typically, marriage is associated with being ‘tied up’ and is conservative; this collection is anti-conservative, allows one to be free, and shows what marriage can be like.” Many of the models wore loose, wide-legged pants and other non-constricting takes on nuptial wear; they were accessorized with trailing, Miss Havisham-like antique veils and flat shoes rather than the fussy trappings of the typical bride.

Whenever a “real” or “natural” woman is evoked, there is some kind of critique of the “artificial” woman lurking right behind it. This kind of “anti-fashion fashion” has something in common with “no-make-up make-up,” which is, after all, still make-up, just in the form of “your lips, but better” lipstick and tinted moisturiser. Bim Adewunmi, writing about the no-make-up make-up trend for BuzzFeed News, said that “effortlessness has become the greatest commodity a woman can own”. The bare-faced crusade, she wrote, was “not a bellwether for a worldwide movement; it’s a display of gentle superiority.” It transforms trying to look good, especially with a male audience in mind, into an unserious project. Which doesn’t mean that beauty is abandoned; it’s just transformed into something serious, bordering on academic. Skincare becomes science. Fashion becomes a cerebral exercise. Being and looking “low maintenance” is seen as a virtue that distinguishes you from lesser, shallower women even as you invest just as much.

Phoebe Philo is another designer credited with adopting a “female gaze” approach to fashion design.

Similarly, when fashion wants to convey worthiness, it turns to press releases about the use of the “female gaze” in the process. Perhaps a female photographer will be touted, or an over-60 woman, usually white, possessing an acceptable number of wrinkles to be considered to be ageing gracefully but not enough to tip over into decrepitude, will be featured. We’re rewarded for arresting the entropy of ageing, so long as we don’t visibly “cheat”. The writer Heather Havrilesky tweeted that “ageing gracefully” is “an inherently sexist concept that we only measure in women, like there’s some special, *right* way to carelessly stay gorgeous as you get older”. Much like the mandate for effortless beauty, “the message is, as with all lady things, don’t try too hard or you’re pathetic”. The stripped-down aesthetic has, itself, become a convention, with ironclad rules of its own. It’s less a flight from the status quo and more a new kind of status quo. Magazines now often run purportedly make-up-free, un-airbrushed photo shoots as if to preempt complaints about the unreality of fashion imagery.

What may finally unseat the gaze is creators finally giving us something new to look at. A film like Celine Sciamma’s Portrait Of A Lady On Fire, by a female writer-director and starring two women, is still a rarity, and even rarer in American cinema. But as the pool of people who depict and are shown, and whose vision receives attention, gets bigger, these distinctions may slip away. We may never fully free ourselves from the capital-G gaze, but perhaps we can all remake our relationship with it.

Shop Dress Code: Unlocking Fashion From The New Look To Millennial Pink by Véronique Hyland (£10.99, HarperCollins) is out now.