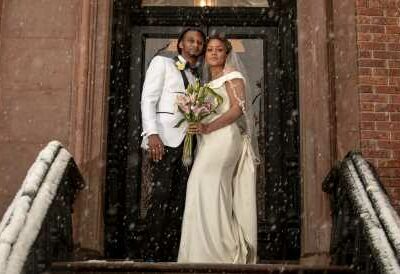 If Sasha Kelly Jackson and Stephen Small-Warner II are spotted passing a treasured old notebook back and forth in their old age, it won’t be because a Nicholas Sparks novel inspired them. Their small spiral pad, pawned off by a stranger at an airport, has its own plot twists.

“I was doing the New York mad-dash thing, and someone held the door, and I said, ‘Aw, man, thanks!’” Ms. Jackson said. The door holder looked familiar. With millimeters to go before it heaved shut, she knew why. “I said, ‘Oh, you go to Howard.’” He disappeared into the turnstiles before she could register his response.

It had been a fluke of geography: Ms. Jackson and Mr. Small-Warner, both 33, grew up in Brooklyn, she Crown Heights, he Bedford-Stuyvesant. Each was home from Howard for freshman year winter break. And though she identified him as a fellow Howard student first, hers was the more recognizable face. Ms. Jackson was already known as “the MTV girl” around campus.

In the fall of 2005, the reality show “Miss Seventeen” made its television debut. Ms. Jackson had been a contestant. “They were more or less trying to find America’s role model,” she said of the show, a joint venture between MTV and Seventeen Magazine. Just before her 2005 graduation from LaGuardia High School, the Manhattan performing arts school often mentioned in the same breath as the movie “Fame,” she saw a flier about auditions. “I was a drama major. I was just like, I’m going.”

Her bid to be Miss Seventeen was ultimately unsuccessful and she found the show a tiny bit embarrassing. “I can’t say I loved every cut and every edit,” she said. But it helped her make friends at Howard. By reputation, “everybody knew me.” That included Mr. Small-Warner.

“Freshman year my boys were like, there’s this girl, she’s cute and she’s on MTV,” he said. “We saw a couple episodes.” Mostly, though, he had no time for reality TV stargazing. Mr. Small-Warner, a long jumper, went to Howard on a track and field scholarship as a business management major. Between that and keeping up with classes his first semester, “I almost flunked out. I was in this melee of trying to figure out what I really wanted to do.”

That melee quieted in 2007 when a fellow track team member entered Apple’s Insomnia Film Festival, which challenged students to write, shoot and edit a three-minute film within 24 hours. Mr. Small-Warner volunteered to make the film’s music. “After that, the camera just bit me and it never let go.”

Not long after, in Fall 2008, Chantal Potter, a mutual friend of Ms. Jackson and Mr. Small-Warner, called on them to help her with a script writing assignment. “She asked us to come over, and she said two other people were coming, and one of them is this guy Steve,” Ms. Jackson said. “I said, ‘I’m not sure who Steve is, but I’m down to help.’”

When Mr. Small-Warner arrived, Ms. Jackson flashed back to the train platform. “I said, ‘I think you held the subway door for me.’ He gave me a nod like, yeah, yeah. I told him I remember thinking he looked like Usher.”

Mr. Small-Warner got that a lot. “I was like, OK,” he said. “I heard that constantly throughout high school.” He set the small talk aside in favor of getting down to business, which impressed Ms. Jackson.

“I think a lot of people take film classes thinking it’s going to be an easy ‘A,’” she said. “I saw that he was trying to master this thing, that he wanted to understand all these elements that I cared about too, and I was like, We should totally make art together.” They hadn’t known each other long enough for her to feel comfortable saying so, but that winter break, when both were back in Brooklyn — she a senior and Mr. Small-Warner a semester behind in the School of Business — she called him. When they returned to Howard, they had created a music video.

“At the time we liked this artist called MeLo-X who had this song called ‘With You,’” Mr. Small-Warner said. “We went all over Brooklyn, out to Canarsie and Bensonhurst, to come up with a theme for the video.” The tragic love story narrative they ended up with widened the lane of their friendship. “We started to realize we were both into psychological thrillers and darker tones.” 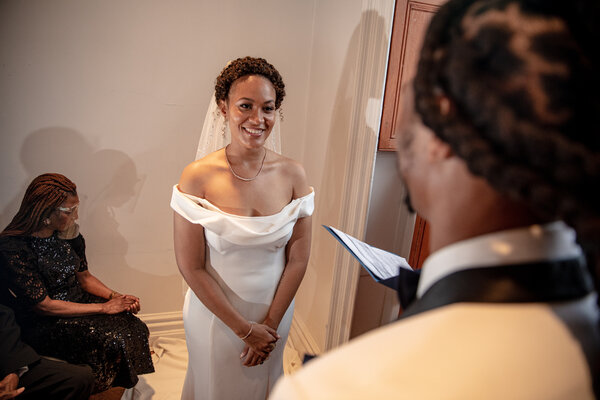 Back at Howard in 2009, Ms. Jackson went to work on her senior film project. Despite long days and early wake-up calls, when she enlisted Mr. Small-Warner to shoot, he was game. “He started having to sleep over kind of frequently, but it was nothing romantic,” she said. “We were fully dressed and on top of the sheets.” Sometimes, they would wake up in the middle of the night to talk through ideas. “Then one day I was like, ‘You know, we should be writing all this down.”

Soon after, a stranger handed Ms. Jackson the black notebook.

“She was this random woman,” she said. The airport was Dulles International; Ms. Jackson was flying to New Orleans to visit a friend. “She had this little book and she said, ‘I don’t want this anymore. Do you want it?’” What was supposed to be a repository for musings on future films instead became an alternating chronicle of their personal lives.

“It started out like, let’s record these dope stories,” she said. “Then we put some rules to it.” One was, write like no one else is reading. Another was don’t write in response to what the other person wrote, just read and accept. A third was write no matter what. “It turned into a place where we could be open and vulnerable. And these weren’t just one-page journal entries. They were 10 or 12 pages of insightful, very personal diary writing.”

By the time the last page was filled, they had fallen in love, though neither was ready to acknowledge it. In the spring of 2009, “there was this moment where, if an audience was watching, they would say, ‘They should be together,’” Ms. Jackson said. On a “drive to nowhere” — their term for grabbing their cameras and deliberately trying to get lost — Mr. Small-Warner pulled over somewhere near the Baltimore Harbor. By a low-to-the-ground billboard, they danced under the stars before climbing up to take pictures. “The moonlight was really strong, and we were just being kids, and it felt like we were illuminated. I was, like, ‘I love him.’ I knew it in my head, but I didn’t say it out loud.”

Mr. Small-Warner knew it, too. “It was cinematic,” he said. “After that is when we started losing time. That’s how you know you’re in love: you start losing time.”

Out of a reluctance to wreck what both considered an intense artistic bond, Ms. Jackson and Mr. Small-Warner waited until 2011 to call themselves a couple. By then, both were Howard graduates living back home in Brooklyn, Ms. Jackson near her parents, Susannah Wittaker and Michael Thompson, and grandmother, Lynette Weithers, and Mr. Small-Warner with his parents Stephen and Norma Small-Warner. They had just eased into their commitment when Mr. Small-Warner was accepted to New York University’s Tisch School of the Arts Asia, a graduate film program in Singapore.

Ms. Jackson accepted the news with equanimity. “I felt really happy for Steve, because I knew it was something he wanted, and I love bearing witness to his accomplishments,” she said. “But there was another side of me that said, ‘Oh.’”

James Malone, a friend from Howard, was more familiar with the accepting side. “Sasha and Steve were known at school as this cool artistic couple,” he said. “But more than that they were known as individuals who carried this dynamic of, I’m going to let the other person do their thing.”

In keeping with that dynamic, they made a pact to think of the two-year separation as a chance to grow individually, with no commitment. Ms. Jackson came to love the time apart. “It allowed me to discover myself as an adult,” she said. “I had the opportunity to figure out stuff I had never even thought about before, like what toilet paper I prefer.” It also jump started her career; she became a production coordinator for television commercials.

When Mr. Small-Warner returned to Brooklyn in 2013, she recommended he take time to get to know himself, too. “I said, ‘You need the chance to just breathe.’”

Their lives in Brooklyn overlapped, sometimes as boyfriend and girlfriend, and sometimes as just friends, until 2017, when Ms. Jackson moved to Los Angeles. Mr. Small-Warner had bought her a one-way ticket the year before, on Valentine’s Day.

“Sasha had always acted here and there, and I could see she wanted to move in that direction again,” he said. “I wanted to support her.” For 18 months, they settled into a long-distance relationship. Then “what we wanted from each other changed.” They needed to be together, he said. In 2018, he moved into her Hollywood apartment.

Both say the West Coast has been good to them. Ms. Jackson has acted in commercials for Google and Subaru and booked her first film role in the 2018 Steve Carell movie “Beautiful Boy.” And Mr. Small-Warner, named the Tribeca Film Institute’s first filmmaker in residence in 2018, is currently directing a documentary, “Agandi,” about an African-American emergency room doctor’s work in Uganda.

In their hearts, though, they are Brooklynites. So, on Oct. 26, 2020, when Ms. Jackson accepted Mr. Small-Warner’s proposal to marry him at a Japanese garden in Los Angeles, they knew where they would say their “I do’s.”

For years, Mr. Small-Warner was president of the Herkimer United Block Association, a group devoted to the concerns of residents in a two-block stretch of Bed-Stuy. “From a heritage standpoint, it’s a big thing for me,” he said. “That area is embedded in my New York story.”

On Feb. 7, Ms. Jackson and Mr. Small-Warner were married in the Small-Warner family brownstone by Mr. Small-Warner’s sister, Sophia Small-Warner, a Universal Life Church minister. Because of the pandemic, only 10 guests, all family members who had taken Covid tests in advance, attended.

In handwritten vows, Ms. Jackson promised to honor Mr. Small-Warner’s space and creativity. “Thank you for finding me in this lifetime,” she said. Mr. Small-Warner laughed, then wiped away tears, before he spoke. “The night we talk about us falling in love, we were on a random drive,” he said. “You’ve always been there for my randomness. I promise I will always be there for the love that has always been there.”

With that, Ms. Small-Warner pronounced them husband and wife.

Where The Small-Warner family brownstone in Bedford-Stuyvesant, Brooklyn

More to Come The family capped off the ceremony with a Champagne lunch. The couple plans to celebrate in a larger way with a Juneteeth “bashment” this year to honor their Caribbean heritage. Mr. Small-Warner’s parents are immigrants from Barbados. Ms. Jackson’s family roots are in Jamaica and Guyana.

Still Collaborating Ms. Jackson and Mr. Small-Warner are still making films together, especially since the start of the coronavirus. “It’s affected our industry a lot, because on the set you’re working in close proximity,” Ms. Jackson said. “It’s a good time to create,” Mr. Small-Warner said.