Home » Fashion » ‘Turn it in to your tool’: How First Ladies use clothes to fashion a message

‘Turn it in to your tool’: How First Ladies use clothes to fashion a message

In the Netflix documentary Becoming, and her autobiography of the same name, former first lady Michelle Obama reflects on the role fashion played in her time in the White House.

"As First Lady, I was slowly watching myself being exposed to the world. I had to become more strategic in how I presented myself because it had the potential of defining me for the rest of my life." 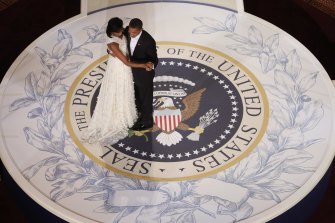 Like it or not, the image of the First Lady – specifically how she dresses – forms a key part of the US presidential narrative, especially in the opening stages of her husband's (because, for now, the presidents have all been men) term.

Whether or not her fashion keeps the press, supporters and detractors fixated depends on many things, including her age and how active a role she plays in political life. 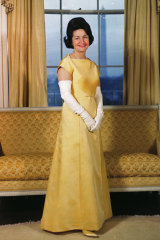 Designer Karen Gee, who has dressed the spouses of several world leaders as well as Meghan, Duchess of Sussex, says the manner in which a First Lady dresses "depends on the circumstances of where the world is in that time and place."

"If you take a look at Jackie Kennedy, she was already known for her fashion style in political society, and also had a hand in designing her dress, where other First Ladies like Lady Bird Johnson had to choose carefully," Gee says. "Just a year after the assassination of [President John F.] Kennedy, she had to be cautious in what she chose out of respect. Her dress was yellow a colour associated with light and optimism."

Obama's style evolved throughout her husband's term in office, eventually making her synonymous with the "power" shift dress, which also showed off her signature toned arms.

"Fashion just isn’t fashion," Obama says in the documentary, observing that First Ladies do well to "turn it in to your tool rather than being a victim to it".

Fashion can also be used as a weapon against a First Lady, often to maintain claims she is out of touch with the average American, if she wears overly expensive garb, or unpatriotic, if she favours a roll-call of international designers over home-grown labels (one of the reasons Vice President-elect Kamala Harris chose to style herself in the now infamous Vogue cover).

In the case of Melania Trump, she was condemned for wearing stilettos to a disaster zone, and an anorak with the words "I really don't care, do you?" at the height of a child-immigration crisis. 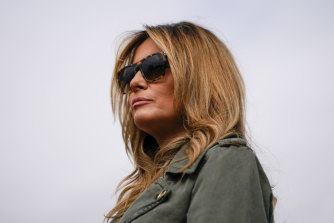 Melania Trump has divided critics at times with her fashion choices.Credit:AP

And let's not forget the constant nit-picking over Hillary Clinton's pant suits, hair, make-up, nay everything about her appearance. In her memoir about the 2016 campaign, What Happened, Clinton said she'd calculated the time spent in hair and make-up during the campaign at 600 hours, or 25 days.

Still, when it comes to First Ladies, there is one occasion where they are almost universally praised: the inauguration ball. But with no glitzy events this year due to COVID and ongoing security concerns, we're left to wonder what could have been. Would Jill Biden have chosen a gown by Oscar de la Renta in Democrat cobalt blue? Would Kamala Harris have snuck a pair of Converse in her bag for a late-night dance?

In lieu of answers, we have revisited some of the most memorable inauguration gowns.

White is often a popular choice for inauguration night, and in Melania Trump's case, it was an off-shoulder gown with a thigh-high split she co-designed with French-American designer Hervé Pierre. At the time, Trump was praised for supporting a designer who had just broken free from the major houses (previously, Pierre worked at Oscar de la Renta and Carolina Herrera) and was forging his own path. But it didn't take long after inauguration night for Trump's fashion controversies to begin, with a long list of designers, including Tom Ford, vocal in their refusal to dress the Republican First Lady.

Still, as far as inauguration gowns go, Trump's passed the test, and in a tradition that began with Helen Taft, wife of President William Howard Taft (1909-1913), the gown is in the Smithsonian museum collection.

Michelle Obama's white, one-shouldered gown for inauguration one (she wore a confident shade of red for round two) had much of America saying "Jason who?" about then emerging designer Jason Wu. In fact, not even Wu knew of the First Lady's choice until she stepped out on to the stage (throughout history, First Ladies have sometimes given the press a preview of their gown, either through a set-up photo or description but the Obamas chose not to do this).

In Becoming, Obama writes: "Jason Wu's creation performed a potent little miracle, making me feel soft and beautiful and open again, just as I began to thin I had nothing of myself left to show."

Speaking to Vogue in 2017, Wu described dressing Obama for the first inauguration the "best experience of his life". He told the London Telegraph in 2016: "What Michelle's brought to the political field is that you can wear something that’s feminine, a little bit sexy, but not compromise your power or your intelligence."

Style really came to the White House when the Kennedys moved in, with Jacqueline Kennedy's arrival coinciding with the dawn of the sexual revolution. Still, when it came to her inauguration gown, her staff took a measured approach. Lisa Kathleen Gaddy, the Smithsonian's First Ladies collection curator, says Kennedy's strapless dress under a sheer sheath was a compromise aimed at pleasing both the traditionalists and the rebels. "The public may have been askance at a strapless dress so they eased into them," she says.

Like Melania Trump, Kennedy also had a role in helping to design her gown, which was created by Ethel Frankau at Bergdorf Custom Salon in New York City.

Today, many would see Rosalynn Carter's decision to re-wear the same gown as she did to her husband Jimmy Carter's governerial inauguration in 1971 as a slick sustainability move ahead of its time. But 1977 was a different time, and Carter was criticised for not paying due attention to the American fashion industry or the symbolism of the inaugural gown, or delivering on the people's wish to see some glamour in the White House. Apparently in 1977, glamour meant a box-fresh gown and not "this old thing".

Get a little more outta life

Start your week with practical tips and expert advice to help you make the most of your personal health, relationships, fitness and nutrition. Sign up to our Live Well newsletter sent every Monday.