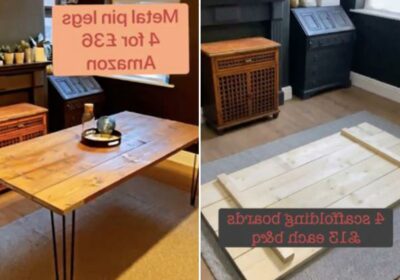 WITH so many of us still stuck at home with little to do, many people across the nation have turned to DIY projects to keep themselves entertained.

Instagram user Abbie, from Sheffield, showed off her incredible DIY skills in a video recently uploaded to her account. 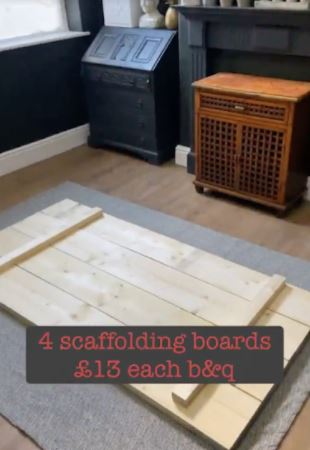 The video shows you how to build an 8-seater dining table using scaffolding boards from B&Q which retail at just £13 each.

Whilst most dining tables that large would set you back at least £200, the couple show you how to make one for less than £90.

The video caption reads: "If you don’t want to spend a small fortune on a larger table then “build a b****”.

"DIY dining table… seats up to 8 for around £80 (given that you already have wax and sanding paper as I did)."

She starts by placing four scaffolding boards on the floor and makes sure they are lined up evenly.

She then takes two thick pieces of wood and places them horizontally across the boards so that they can be joined.

Although it is not shown in the video, she then screws the thick joining pieces of wood to the boards so they are securely attached together.

The top of the table is then rested on a box for the final steps.

Next, they sand the boards down and use varnish and beeswax to seal the wood.

Once the varnish and seal is dry, the couple attach the legs they purchased to the top of the table.

They went for the popular modern-style metal pin legs, and said they got four of them from Amazon for just £36.

In a comment, Abbie said they added four extra brackets to the table legs which has made it sturdy.

The end result is incredible and it looks way more expensive than it actually was to build.

One user wrote: "Oh this is impressive. It looks great xx"

Another user responded: "This is such a good idea!" 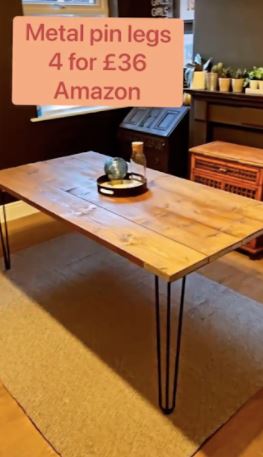 Plus how this woman transformed her tired-looking patio to chic outdoor space using nothing but a tin of paint and a stencil.

And find out how this mum created her sons dream galaxy-bedroom on a budget- including DIY clouds.

Meanwhile this woman turned her attic into a cinema using Amazon and The Range bargains.