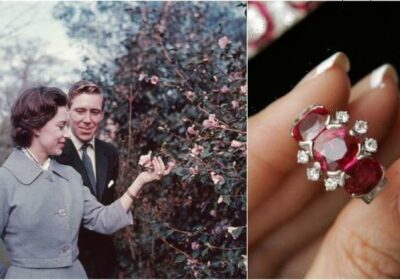 Princess Margaret was 'jealous' of Diana and Fergie says Bond

Antony Armstrong-Jones threw all royal conventions out of the window when he proposed to The Queen’s younger sister Princess Margaret in 1960, and chose one of the most unique shapes ever for her engagement ring. Antony, who later became the Earl of Snowdon, was already a unique choice as a husband as he was a photographer and filmmaker, as opposed to being born from noble birth like all royal spouses before this marriage. Princess Margaret’s ruby ring mimicked a rosebud and was absolutely stunning.

After a failed engagement to Group Captain Peter Townsend, Princess Margaret accepted a ring from the handsome photographer Antony Armstrong-Jones.

The engagement ring features a ruby surrounded by diamonds made to look like a rosebud.

This was in keeping with other royal engagement rings that have a sentimental value.

From Prince William proposing to Kate Middleton with his mother Princess Diana’s ring, to Queen Elizabeth’s dazzling diamonds that were passed down from Prince Philip’s mother, royal engagement rings often have a sentimental backstory.

But the ring was a break from royal tradition with engagement rings, which are usually made from diamonds and/or sapphires.

Margaret and Antony tied the knot at Westminster Abbey on 6 May 1960, just over two months after they surprised fans with their engagement announcement.

This followed a low-key two-year relationship between the couple, and this was the first match of Margaret’s which was approved by her sister, The Queen.

Their nuptials have gone down in history since it was the first royal wedding to be broadcast on television.

The bride looked beautiful in a silk gown by Norman Hartnell, featuring long sleeves and a full skirt which reportedly used over 30 metres of fabric.

Margaret accessorised the gown with the Poltimore tiara and a long veil that filled the length of the cathedral aisle.

Following their wedding, Princess Margaret and her husband welcomed two children together, David Armstrong-Jones and Lady Sarah Chatto in 1961 and 1964 respectively.

However, the pair separated after 16 years of marriage and in 1978 they became the first royals to divorce since King Henry VIII in 1540.

It was designed by her future husband, Antony Armstrong-Jones, to look like a rose bud.

Not only are rubies popular for their beauty and durability, making them an ideal gemstone for engagement rings.

Their rich and vibrant colour is also synonymous with royalty and passion.

Royal fans can get a dupe of Princess Margaret’s engagement ring, and buy a ruby trilogy ring from the Diamond Store.

Their ruby 0.85ct and diamond 9K gold ring is currently on sale for £395, a very reasonable price to feel like royalty.