The Top 10 Best Selling Sneakers at Stadium Goods This Year With the holiday season’s festivities creeping upon us and an unprecedented year in the world of footwear getting ready to close, it’s the perfect time to take a look back at some of the year’s best releases. Stadium Goods, the sneaker and streetwear marketplace with some of the rarest grails and most limited-edition sneakers around, has just released a list of its own best selling shoes so you don’t have to look too hard to find what you’ll need. Whether you’re looking to gift someone something special or just intrigued about what the end of year summary looks like in the world of footwear, Stadium Goods has got you covered on all accords. Reflecting on 2020, here are the top 10 best selling sneakers at Stadium Goods this year. 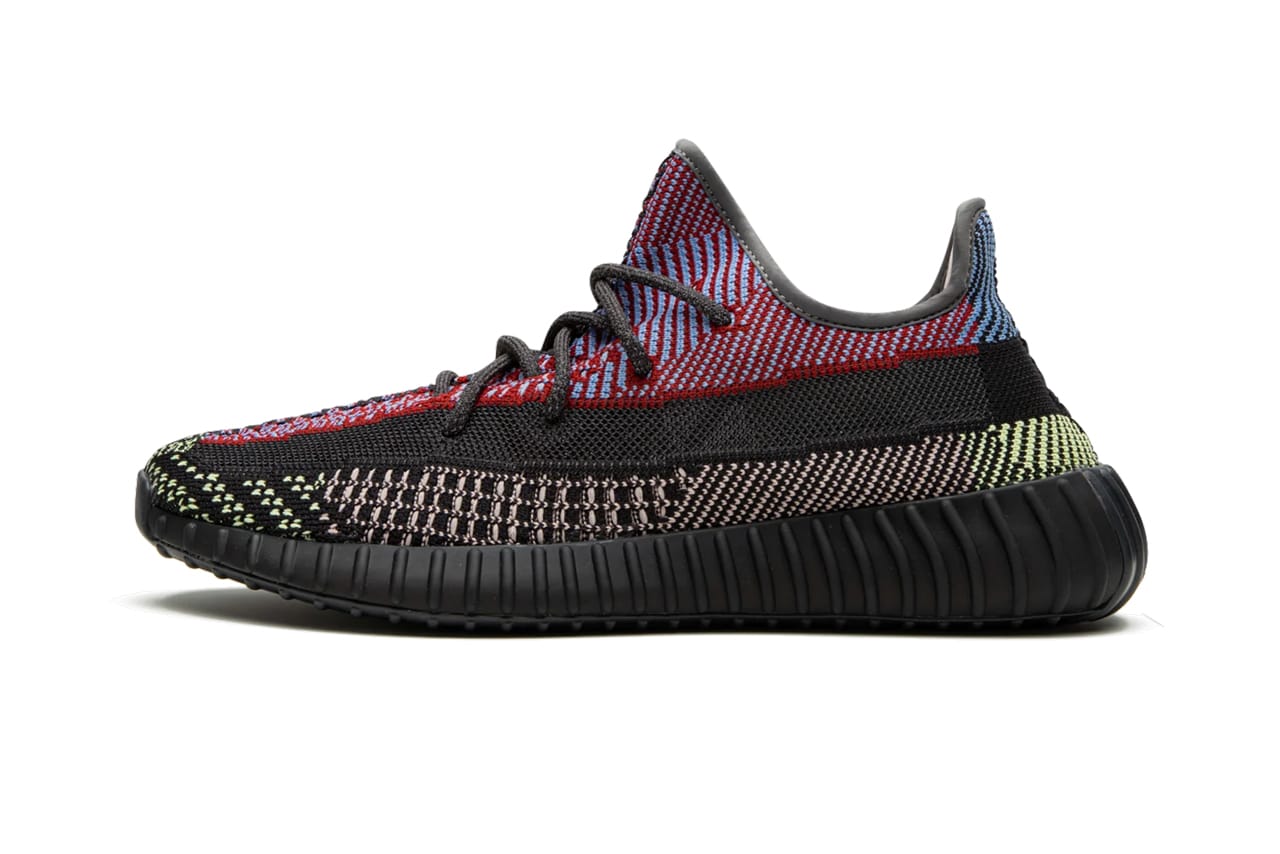 Released in December 2019, the adidas YEEZY Boost 350 V2 “Yecheil” silhouette departs from Kanye West’s previous renditions connected by his signature earth tones. The multicolored yarns give a graphical look to the breathable Primeknit upper while sporting a black Primeknit base. The shoe’s design encompasses hues of blue, red, pink and yellow while the medial side features a more simplified two-tone knit weave of black and light pink. Additional detail includes rope laces, Three-Stripes at the inner heel and a translucent monofilament stripe through the lateral, contrasting the intricate coloration while the sneaker rounds out with the same 350 midsole/outsole blacked as usual, housing full-length Boost foam cushioning. 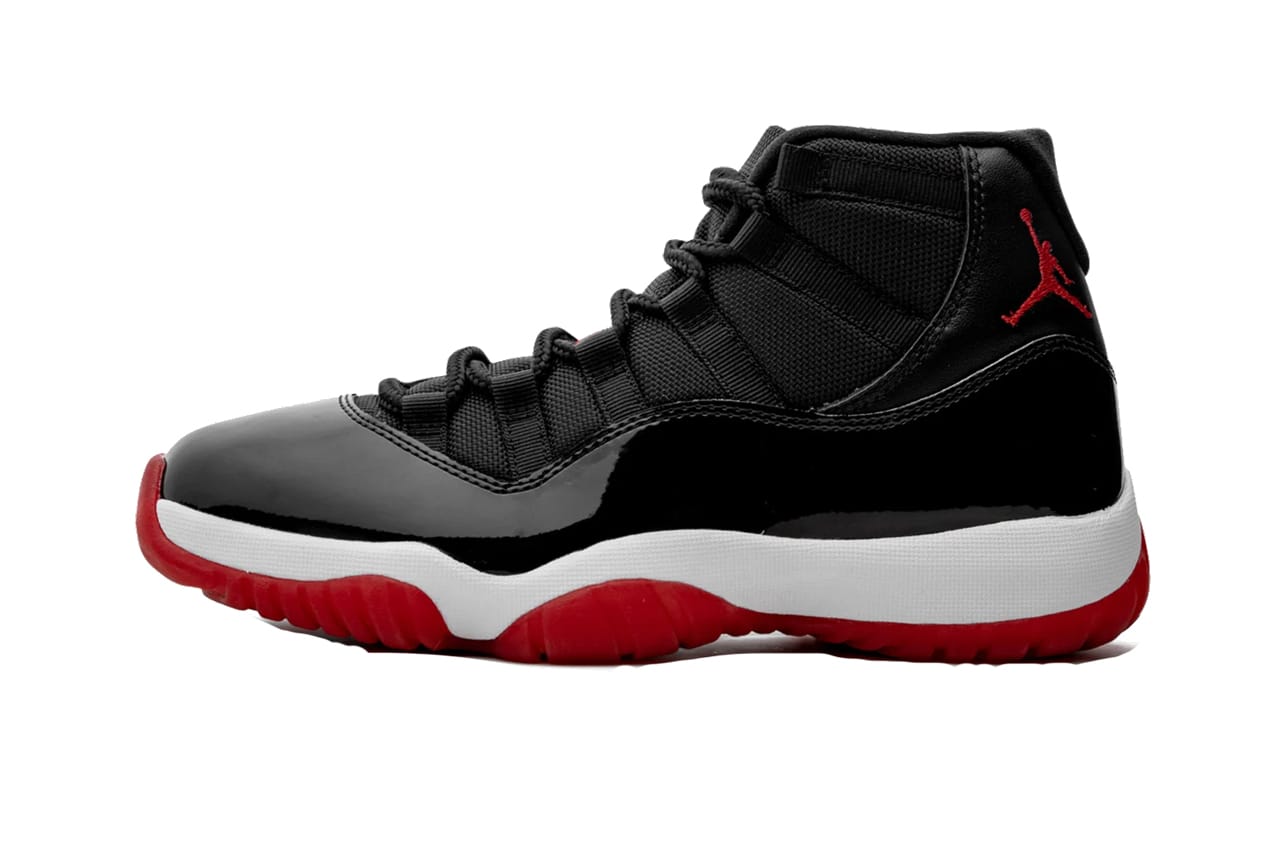 The Air Jordan 11 Retro “Bred 2019” brings back an original colorway initially debuted in 1995. The Tinker Hatfield-designed silhouette features Chicago Bulls colors, with black mesh on the upper sitting atop shiny black patent leather. A white midsole melds nicely with the carbon fiber midfoot plate, translucent varsity red outsole, and utilizes the same colorway that Michael Jordan wore during the 1996 NBA championship playoff run. This retro was distributed back in December 2019 with its OG detailing like the high-cut patent leather, signature Jumpman branding and MJ’s number 23 stamped on the heel. 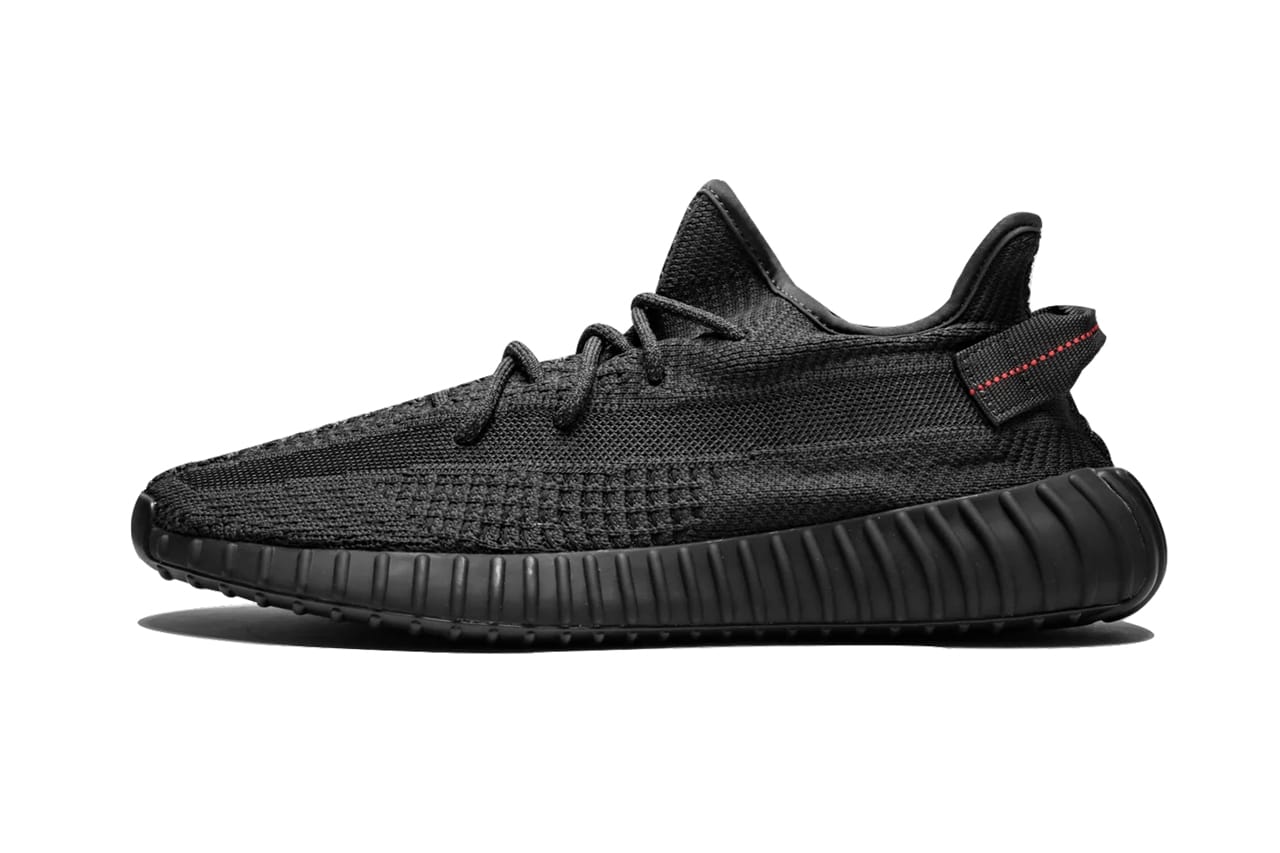 The adidas YEEZY Boost 350 V2 “Static Black” (non-reflective) is the all-black colorway for Kanye West’s most popular sneaker with the Three Stripes. This Yeezy Boost 350 V2 comes with a black upper, black midsole and a red stripe over the heel tab. With a closer look, the shoe has a stealthy look in black for its Primeknit upper, translucent side stripe panels, and a translucent rubber midsole that houses the full-length Boost foam cushioning. 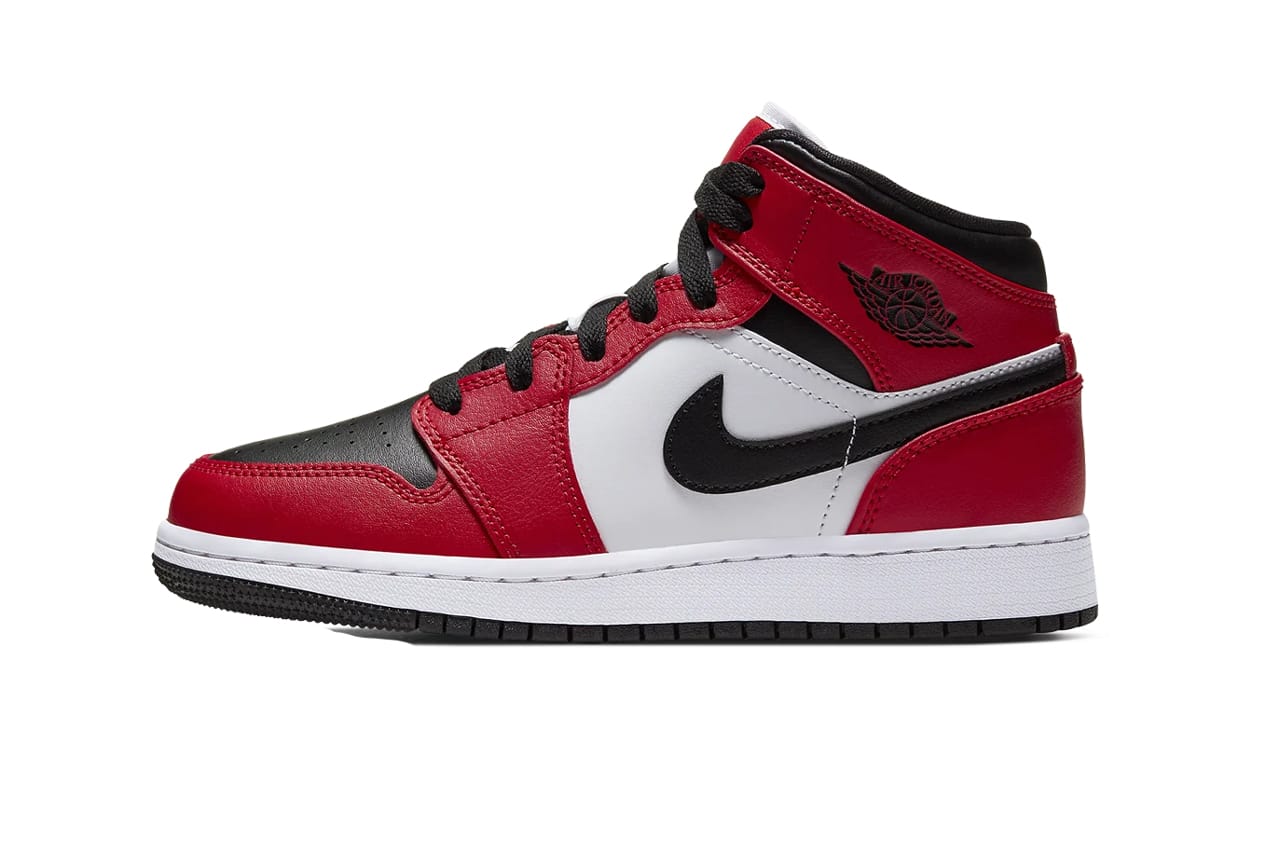 The Air Jordan 1 Mid GS “Chicago Black Toe” draws inspiration from the sneaker’s 1985 roots. Taking hits from both the famous “Chicago” and “Black Toe” looks, the distinctive color blocking is reminiscent of the OG “Chicago” colorway with red leather overlays applied to a mid-top silhouette and revised with a black finish over the perforated toe box. Jumpman branding adorns the woven tag stitched onto the padded white nylon tongue, while a black leather Jordan Swoosh and the classic Wings logo is stamped in black on the lateral collar flap. 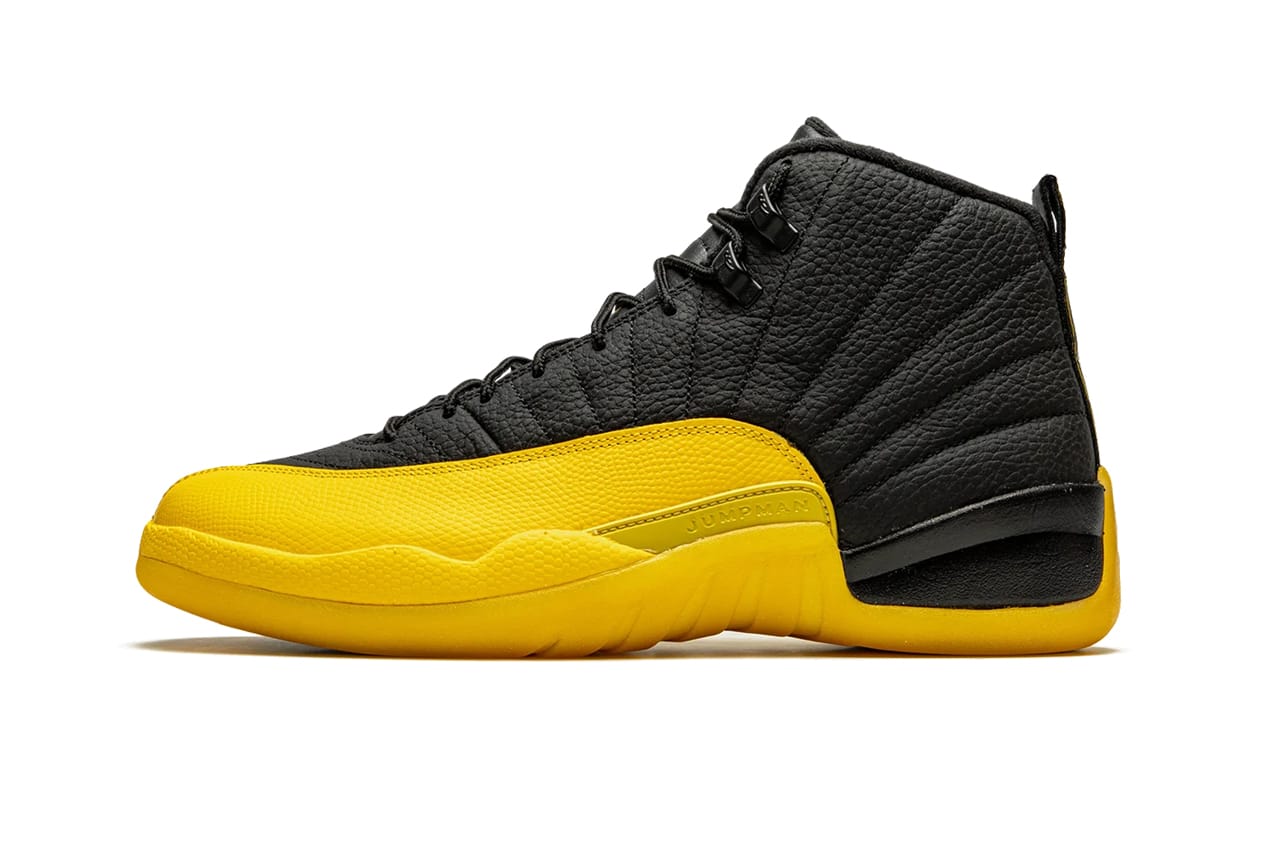 The Air Jordan 12 “University Gold” is a refreshing new colorway of Michael Jordan’s late-90s signature shoe. Although this colorway has never released to the public, it draws a close resemblance to the Jordan 12 “Gary Payton PE” that The Glove wore during the ’03 to ’04 NBA season with the Los Angeles Lakers. The retro mid-top sports a black tumbled leather upper with signature stitch detailing, contrasted by a University Gold finish on the textured forefoot overlays. Jordan “Two Three” branding on the tongue and a yellow sole complete the design. 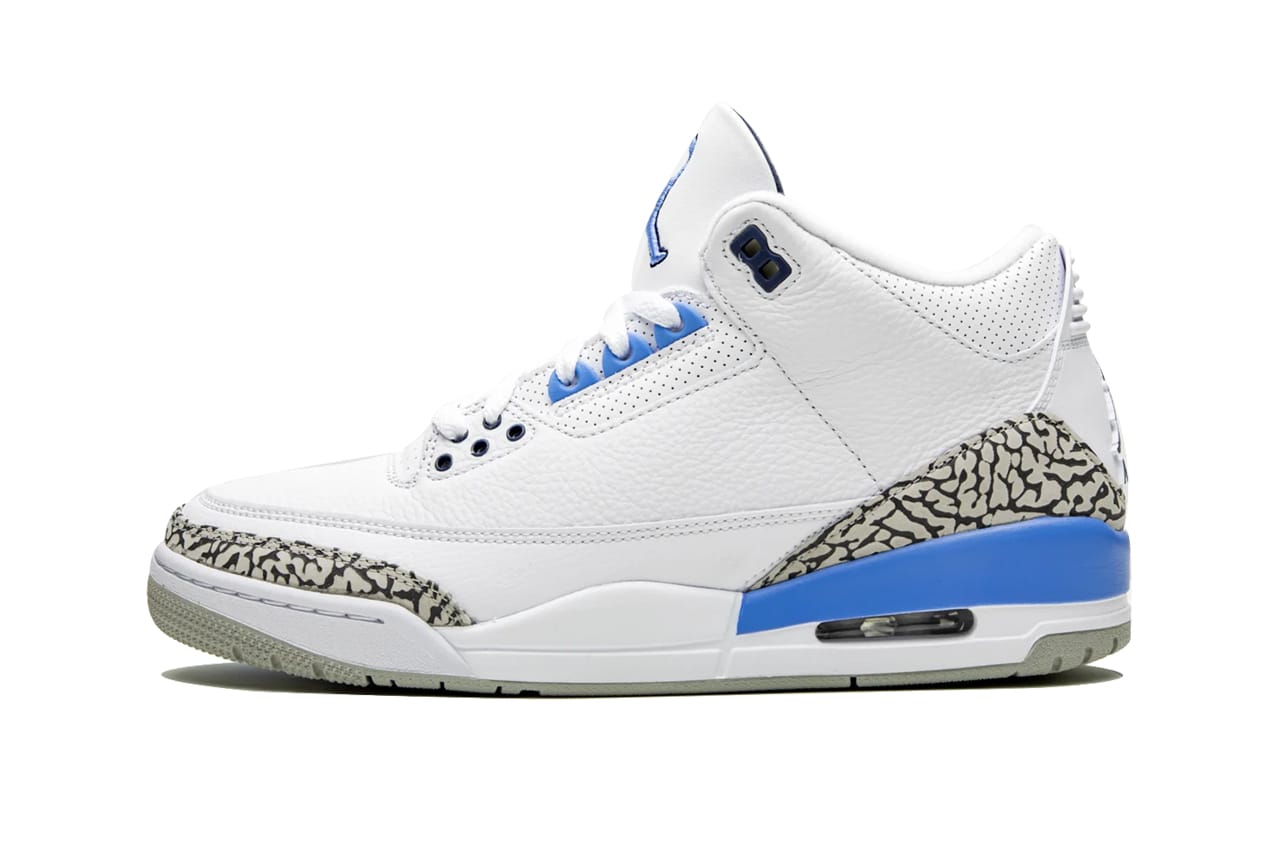 The Air Jordan 3 “UNC” is a Carolina-blue-based colorway of the Jordan 3 design, inspired by the University of North Carolina Tarheels. As a homage to Michael Jordan’s alma mater, the special edition sneaker presents university-themed colors on its dual-textured leather upper and eye-stays, with elephant print panels granting an iconic touch. Valor blue hits both Jumpman logos on the tongue and heel while the visible Air unit in the midsole and grey rubber outsole wrap up the styling. 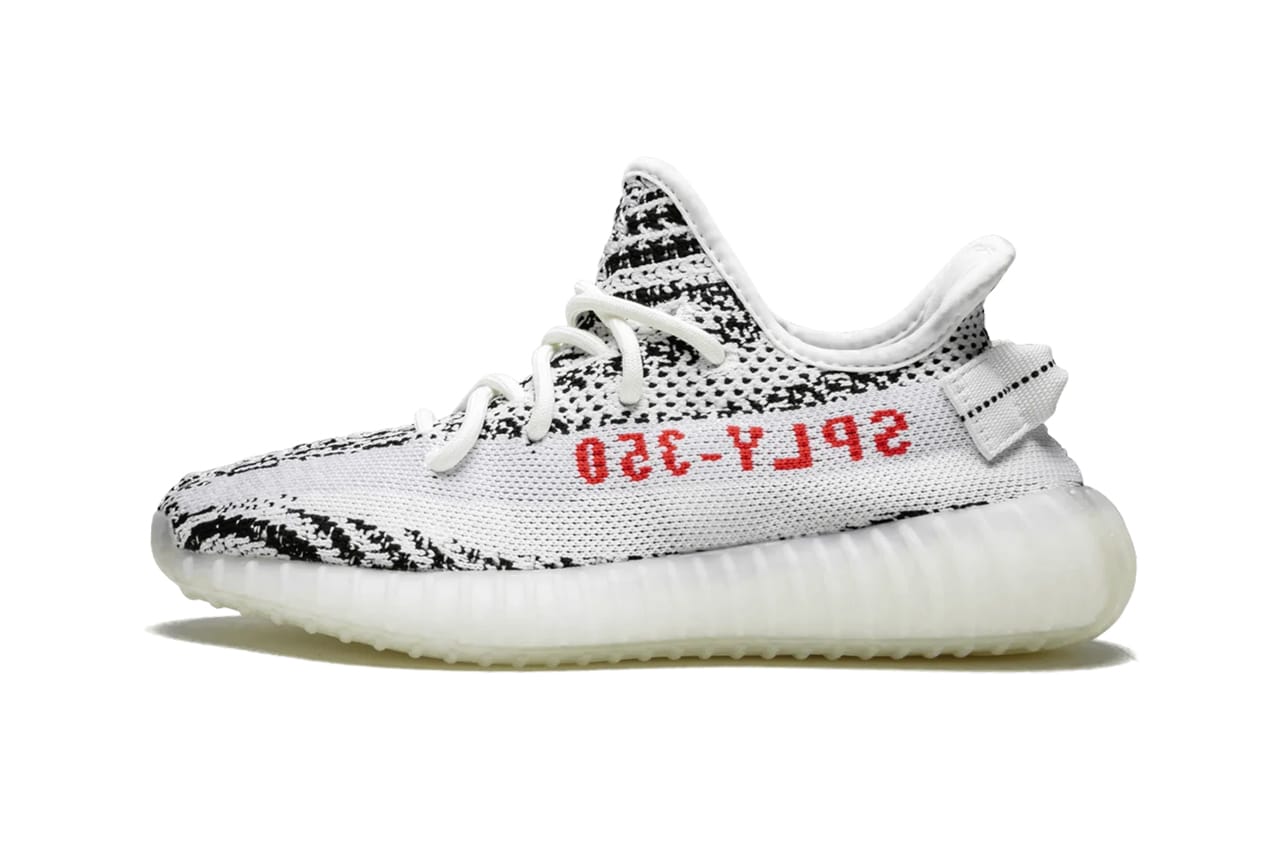 The adidas YEEZY Boost 350 v2 “Zebra 2018” was the restocked version of the popular “Zebra” colorway that first released back in 2017. The YEEZY Boost 350 V2 “Zebra” combined a white/core black Primeknit upper with red SPLY 350 branding and full-length Boost cushioning, and this re-release remained the same with a few minor differences. The “Zebra 2018” featured a brighter shade of white upon the outsole, brighter red for the “350 – SPLY” text on the Primeknit upper, different production dates on the inner size tag, and a different mold for the Boost foam outsole. 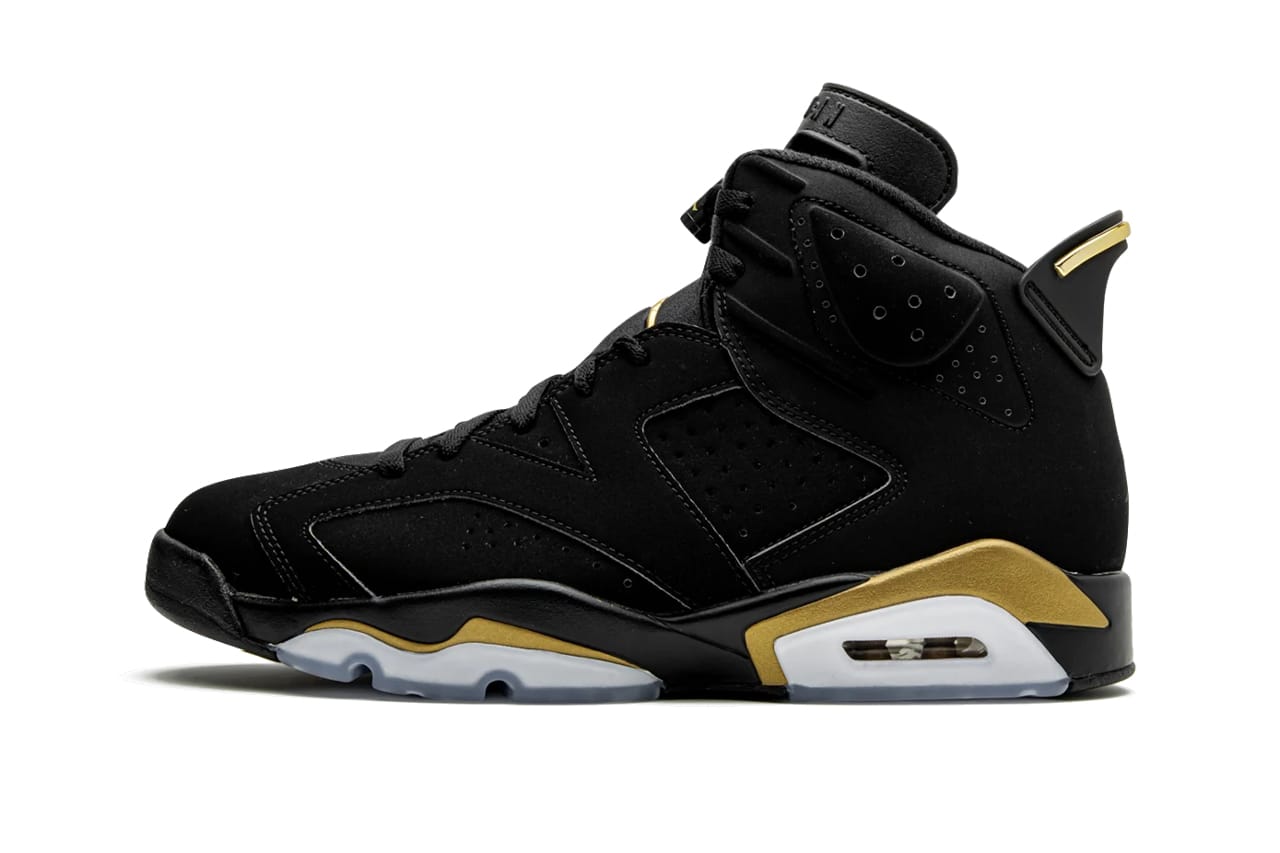 The original “Defining Moments Package” debuted in 2006 as a tribute to Michael Jordan’s pair of three-peat championships in the 1990’s with the Chicago Bulls. Released in April 2020, the Air Jordan 6 Retro “Defining Moments” 2020 brings back the classed-up colorway last seen in 2006. Like the original ‘91 Tinker Hatfield creation modeled after MJ’s German sportscar, this version embodies speed and class with a spoiler-like heel clip, neoprene sleeve and streamlined nubuck upper. The Air Jordan 6 comes with a gold-accented Jumpman on the tongue and gold trim on the midsole that provides a touch of opulent styling as well. Prominent ankle cushioning, geometric perforated sections and visible Air complete the shoe MJ wore on his way to title #1. 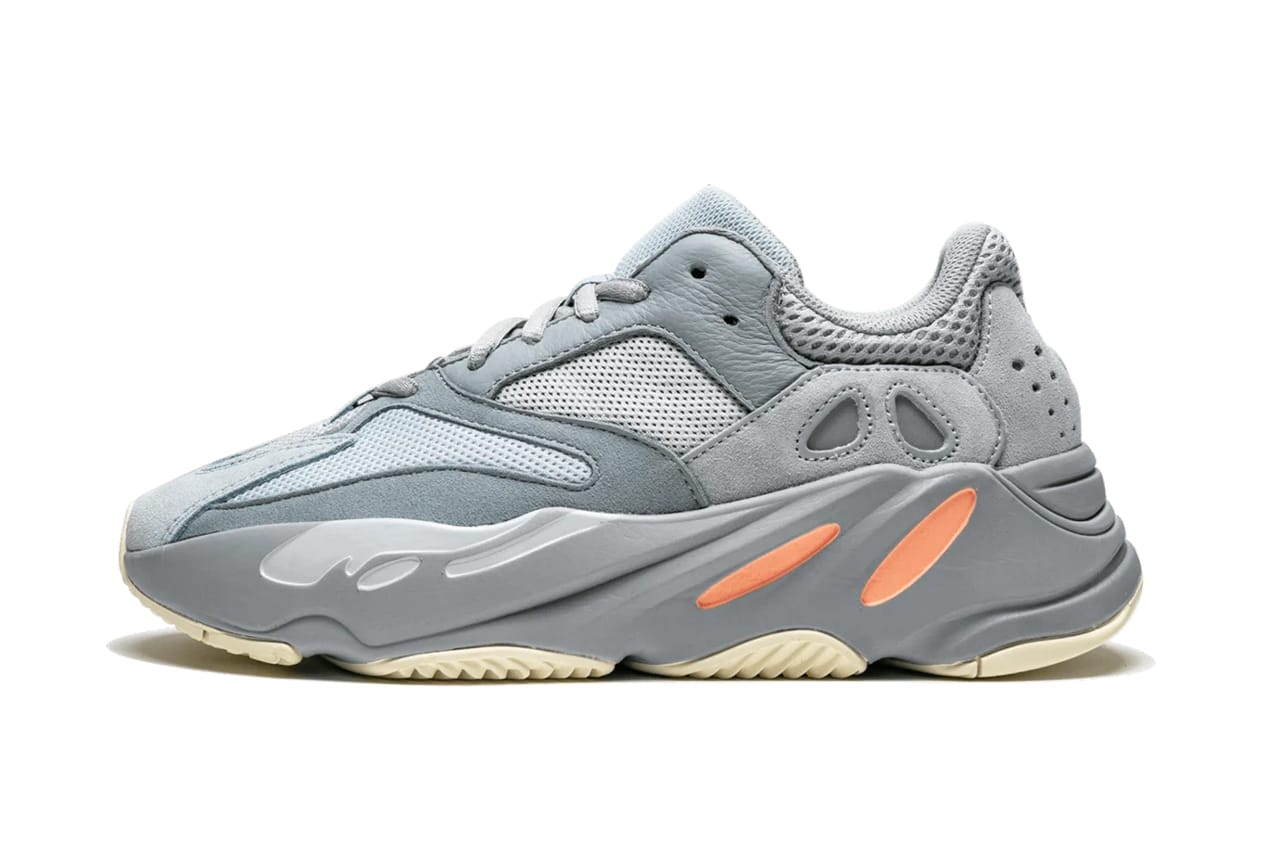 The adidas YEEZY Boost 700 “Inertia” was the fourth colorway released of the popular chunky sneaker by Kanye West and adidas as part of the YEEZY Season 8 lineup that launched in March of 2019. The decidedly soft color palette featured multiple shades of grey across the premium leather, a suede construction, mesh upper with light pink accents and reflective silver accents throughout. A creamy white midsole finishes the pair, along with the shoe’s signature chunky midsole, equipped with full-length Boost cushioning for responsive comfort. 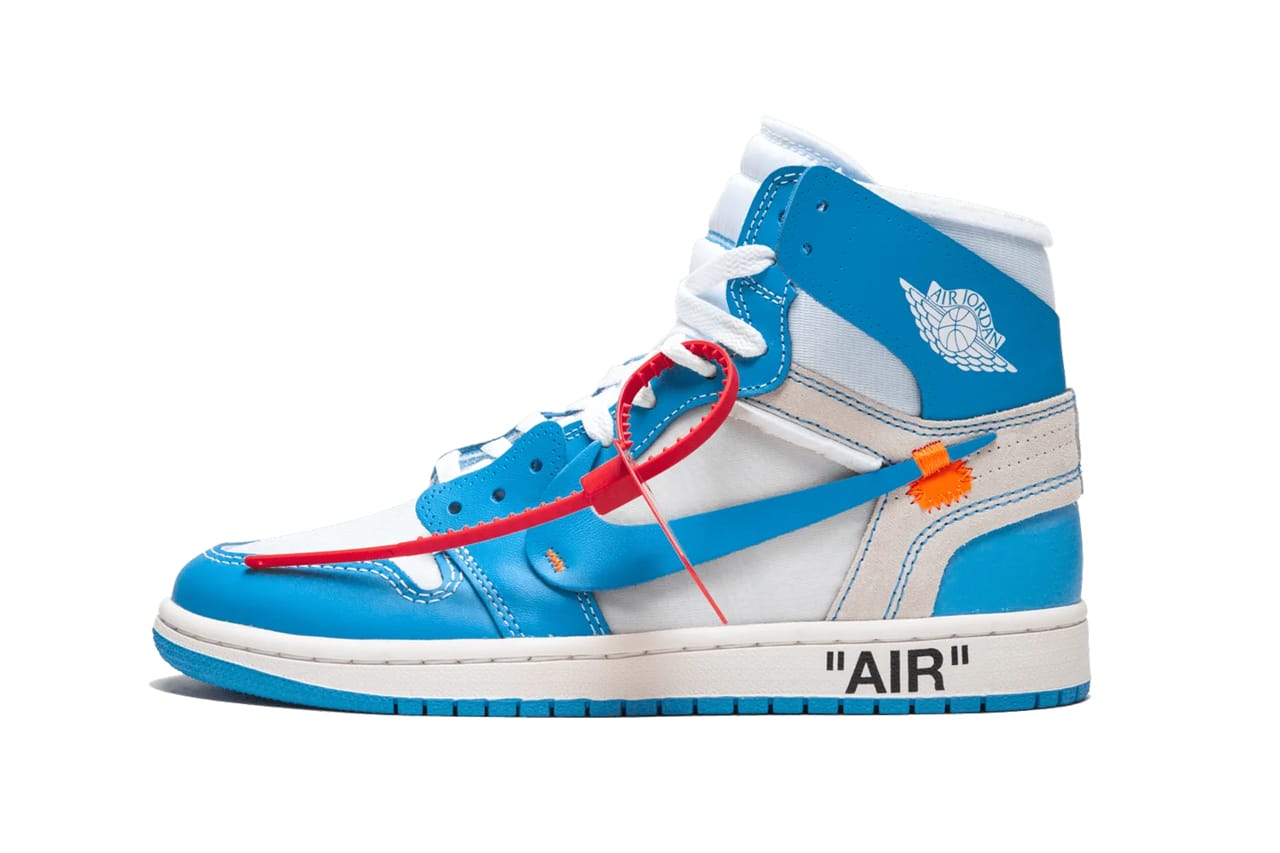 Stadium Goods’ best selling sneakers of 2020 are all available for purchase on the store’s website now.
Source: Read Full Article