The Stylist Behind Grimes’s Futuristic Look 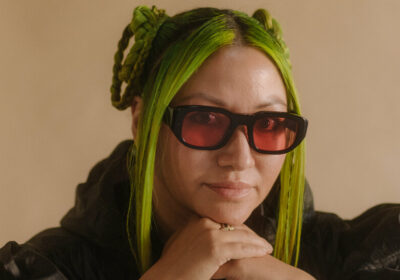 For last week’s Met Gala, Grimes wore a Dune-inspired reptilian dress and carried a steel sword made from a melted down AR-15 rifle. The woman who pulled the ensemble together is a stylist named Turner, a former accessories editor at Jane magazine, who has been Grimes’s stylist for six years.

Raised in Alexandria, Va., Turner (she goes by her last name) studied graphic design at the School of Visual Arts in New York, where an instructor told her she was clearly a stylist. Although her roster includes Kim Gordon, Kesha and other musicians, her steadiest client is also her first: Grimes. They met in 2015, a few days after Turner, 40, moved to Los Angeles and a fashion editor at Nylon magazine asked if she would style Grimes for a cover. The two hit it off and have worked together ever since. Turner shared some insight in Grimes’s style.

Whose idea was the sword?

It’s always Grimes’s idea. But her manager was the person who had brought in MSCHF [the Brooklyn artist collective that designed the sword]. We also knew that bringing a sword to the Met Gala was going to be tricky. I was persistent in trying to get clearance for that sword. When I got her to the carpet, there was a security guard who said, “I’m sorry, you can’t bring that in.” And I had to say: “No, the sword must come in. It’s been cleared.”

Grimes wore a futuristic silk dress by Iris van Herpen, who is Dutch. Were you intentionally skirting this year’s theme, American Independence?

No. I had a conversation with Grimes: What is American fashion? What does that mean? Is it a picket fence? Is it a horse? Is it the flag? She said, “I really identify with Dune, the American book, and then the American movie.” Iris submitted a sketch that was spot on — it looked like all the references Grimes had sent. There is no other designer that does what Iris does. She’s just so technically brilliant: She had 3-D printed silicon reptilian scales that were glued on. Who else is doing that?

What about the boots?

They’re actually Marc Jacobs. I got them through an amazing collector named Johnny at Pechuga Vintage here in L.A. The shoes need to function. It has to be something they can walk on. In Grimes’s case you need a lot of height and a lot of ankle support. It lends itself to that warrior vibe.

Those ears were not the ears she was supposed to wear. Originally, we had custom elven ears made by Lillian Shalom, who spent 90 hours on them, but they weren’t sitting on the ear properly. And we were crushed, but we had a backup, because Grimes pulled another pair out of her bag. That’s just personal jewelry to her.

It seems like it’s an extension of her. We’ve had it in videos before. It’s a direct reference to everything she has been dreaming about in her next vision of her upcoming cycle.

Her upcoming record cycle. In the months leading up to a record release, there’s a bible that she has created of what she envisions herself to be, where she’s going to take her music, where her music is going to live, who she’s going to collaborate with. She’s like the creative director. She has to assemble a team, a squadron if you will, of people who are going to get the job done.

And you’re on uniforms?

I wish. I come from a military family. My dad was a photographer on an air base. I watched my father take really beautiful photographs of people. Not celebrities. Just regular guys. He taught me how to style a portrait, like how to tuck the shirt in so it was super-tight and wasn’t leaving any creases around the belt line. He told me what colors looked good with people’s skin tones.

In high school, I saw this episode of MTV’s “House of Style” with Anne Christensen working in Vogue’s fashion closet. I watched it over and over on VHS because we didn’t have cable. I saw a bunch of shoes and racks of clothes, and that’s when I realized there was a job where you can put clothes on people. When I got to New York, I got an assisting job at T: The New York Times Style Magazine under Anne Christensen. That was the most exciting thing that happened to me.

What’s the story behind the one name: Turner?

When I was 10, my best friend Kristina Buddenhagen and I met in elementary school. Both of our moms are Vietnamese, and we had the same name but different spelling: I’m Christina. She started calling me “Turner,” my last name, because our moms would call for one of us, and we would both come running. And it followed me. It’s not like I’m trying to bring myself any attention, but it has been very good branding.

How has Grimes’s look evolved in the six years you’ve worked together?

When I met Grimes, she was buying things off Depop and Etsy, and I think she still does. She was very used to dressing herself, and with time there’s a lot of trust. She made me bring in designers, like Iris. She’s in her 30s now. She’s not a girl. She’s a representation of a woman that is powerful.

Who else are you working with?

I have worked a long time with Kim Gordon. She’s a neighbor, and I go over there every couple of weeks and we plan her closet and it’s surreal. Kim has great relationship advice. I also just started working with Kesha. I believe in her.

What is it that draws you to these strong women artists, and them to you?

I respect their vision. I hear them out. I get to know them. Also I’m a nice guy. My base level remit is to aid my clients in the process of saying what they want through the visual, tangible medium of what they wear. I’d like to think I am giving them armor to conquer the world.

The interview has been edited.