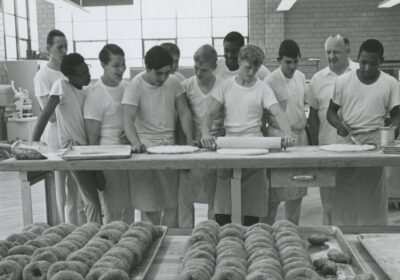 Is there room in your mind for unuseful details? Or, would you make some, despite long odds the material could one day prove practicable?

For those who find comfort in stockpiling answers to unasked questions, an invitation: Once a month, most months, there happens a happening that rewards compulsive curiosity. For a few hours in the backcountry of social media, miscellaneous facts surge and swirl and billow in unison, like clouds of starlings disappearing and reforming in an empty winter sky.

They flutter in from niche museums, government agencies, school libraries and county historians — released on a summons from The National Archives and Records Administration of the United States. This confluence is known as an “Archives Hashtag Party.”

The parties unfold on Twitter, mainly, and they are more like frenzied show-and-tells than parties. On the appointed day, and concerning the appointed topic (for instance, “inventions”), participants unleash volleys of images and trivia from their records, tagged with a communal hashtag to facilitate mass perusal.

In December, the topic was #ArchivesBakeOff.

The Phillips Library at the Peabody Essex Museum tweeted an 1832 recipe for potted pigeon.

The Niels Bohr Library & Archives at the American Institute of Physics tweeted a photograph of the physicist Tsung-Dao Lee cutting into a backward cake decorated with a mirror-written “Happy Birthday.”

The National Archives at St. Louis tweeted a scanned 1980 U.S. Army record communicating that medic and eventual serial killer Jeffrey Dahmer had been caught rifling through a refrigerator in a building in which he “had no business.” 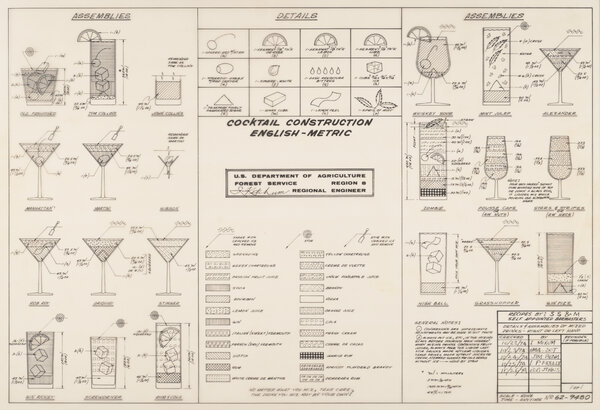 “A lot of times people think of the National Archives, and they stop at the Declaration of Independence and the Constitution,” said Hilary Parkinson, a public affairs specialist for the agency. “So this was a great chance to show more documents and more records and go beyond just the big anniversaries of things.”

Conceived as a six-month campaign, the parties proved far too popular to stop. Since the first hashtag party in August of 2017 (#ArchivesSquadGoals, which surfaced images of Louis Armstrong with his trumpet teacher and of two men pushing 1.5 tons of nickels), Archives data indicates these digital events have prompted some 120,000 tweets, from more than 70,000 contributors.

“Archivists tend to be really passionate people,” said Jeannie Chen, a digital engagement manager at the National Archives. “They know their collections so well.”

Ms. Chen and Ms. Parkinson are one half of a four-person team at the agency’s headquarters in Washington, D.C. that concocts the themes and spreads the word to other organizations in advance through an email sent out roughly two weeks before a party.

The recipients are nearly 300 institutions that have asked to be kept in the loop, to have time to scour their own records for relevant content. (Parties typically occur the first Friday of every month; following a New Year’s break, the next is scheduled for February 5.)

“We spend a long time trying to make it really inclusive and broad, so that there’s a hook for any kind of archive,” Ms. Chen said.

Identifying a theme that is both novel and all-purpose is “probably one of those things that seems very easy,” said Ms. Parkinson. “It’s actually a lot of work.”

Of those who habitually jump in, the Corning Museum is a reliable font of relevant glass. And the museum system of Placer County, Calif., is an excellent resource for photos from any sanitarium or state mental hospital ever located in Placer County, Calif. Regular people toss family photos into the mix as well.

Like any good hosts, once a party begins, Archives staff work feverishly to keep the digital conversations rolling. An internal Google Doc contains material they intend to post directly to their accounts, plus a selection of records they suspect might prove suitable for replies to others.

“There are certain ones that we’ll think, ‘This will be a good response,’ because we think that there might be a post about, you know, some giant cake,” said Ms. Chen. (Speaking broadly of the past, Ms. Chen explained: “There were many giant recipes for large cakes.”)

In a bleak period, the work of the archivist assumes exceptional poignancy. Chaos takes on the shape of order as it is cataloged for posterity. There is optimism inherent in record-keeping of any kind: the work of the archivist, while rooted in past and present, is performed for an imagined future. There is no reason to save, for 47 years and counting, an uncrisp photograph of “Herman Henry” carrying “the county sesquicentennial cake into the gala celebration in 1973,” except that saver is able to conceive of some hypothetical circumstance wherein at least one person will want — or need — to see it.

Sit Down and Search Awhile

An ideal guest for an archives hashtag party is someone who is eager to know things, but not particular about what, or else, is eager to learn everything and indifferent to in what order — someone who, given the chance to see a menu of a dinner eaten by President Taft, would love to see two.

The most rollicking way to experience the parties is to use the submissions as diving boards into research rabbit holes.

A picture of Betty Ford cheerily stringing Christmas cookies with her daughter Susan, tweeted by the National Archives collection at Riverside, Calif., receives unexpected context from a memo sent 18 days later, tweeted by the Ford Library, that describes stringing cookies as “hideously time-consuming” and begs East Wing staff to help accelerate the process.

Expanding the search beyond tweets, one can learn that the lady who made sugar cookie cubes for NASA was a physiologist (she had a master’s degree in anatomy), while the man who made gingerbread houses for the Nixons, Fords, Carters, Reagans and Bushes also worked for the Nazis (he was a cook for the Kriegsmarine).

Because a primary component of records is history, not all party content is blithe and quirky. An #ArchivesPoolParty theme in 2019 produced artifacts of racially segregated swimming pools, beaches and vacation lodging; a 1963 Army survey of segregated public facilities near military bases; and a fifties-era Boy Scouts swimming safety leaflet featuring drawings of African-American boys, which, the Twitter account of the Durham County, N.C. library system, noted, was “a rarity in health and science brochures at that time.” During the recent baking-themed party, the Library of Virginia shared a long thread in which librarians traced the origins of a dish mentioned in a newspaper account of a suffrage bake sale back to its probable uncredited creator: a Black woman named Mariah Richardson employed as a cook in the childhood home of one of the suffragists.

Thus far, the parties have been spared from significant troll activity. Social media has “a well-deserved reputation for being a toxic place sometimes,” Ms. Parkinson said, adding, “I think that the hashtag party is a respite from that. It’s not to tear anything down. It’s only to build your knowledge and build your enjoyment of history and let you know these amazing things are out there. People who care passionately about all kinds of history and preserving it making it accessible, are doing that work for you.”

The exuberance of the hashtag parties is even more remarkable when one considers the fact that internal surveys of government workers consistently rate the National Archives and Records Administration among the worst places to work in the federal government.

“Much of the work that goes on behind the scenes at the Archives is hard, physical work in windowless facilities that lack amenities found in most Federal office settings,” said David Ferriero, the head of the Archives, when testifying about his agency’s persistent low ranking before a Congressional committee in 2015.

Mr. Ferriero added that over the previous three decades, the agency’s holdings had “more than tripled” as staff numbers fell, “rightfully” frustrating employees who “have felt undervalued and overworked for years.”

Nonetheless, a 2019 analysis found that 91 percent of Archives employees agree with the statement: “The work I do is important.” This is, of course, the argument for any archive. Archivists do not proclaim life good or bad, or random or predetermined; they contend only that it is important. “Yummy banana pudding” from last year’s holiday party is important, says the Utah State Archives. “A recipe from our Office Manager Sherry Schutter” is important, says an organization dedicated to preserving the legacy of the Chief U.S. Prosecutor at Nuremberg.

Of course, significance is subjective: Although Mr. Ferriero assumed the office of Archivist of the United States under former President Barack Obama, the agency faced strong criticism during the Trump administration for designating certain records — including some related to deaths, and sexual assault and abuse allegations, of detainees in the custody of the Immigration and Customs Enforcement agency — as “temporary,” and therefore scheduled for eventual destruction. In response to public comments, the retention period for some records was lengthened, while others were reclassified as having “permanent historical value.”

The sweet spot for archive hashtag party guests, Ms. Parkinson said, is “learning something new about something you already knew about.”

You know (perhaps) that Dwight Eisenhower served as President of the United States at some point during the 20th century. But did you know that his post-presidential papers include cooking directions typed by his staff — or clipped from other sources — and pasted into a scrapbook alongside some of his own enormous recipes (like a beef stew that feeds 60)? Or that he requested Queen Elizabeth’s recipe for drop scones after she hosted him at Balmoral Castle in August 1959? Or that the queen sent the recipe several months later accompanied by a handwritten note which featured cooking tips that seemed only to render the recipe much more confusing?

Does history come alive in the kitchen when one attempts to recreate the queen’s drop scones in one’s own kitchen? From personal experience, the answer is: not really — or else the president implored the Queen of England to send him the recipe for a kind of very airy, slightly metallic, burnt floppy pancake. (Success may be thwarted by the queen’s tip about reducing serving size, which presents this as the rare baking recipe in which ingredient ratios are irrelevant: “Though the quantities are for 16 people,” she scrawled, “when there are fewer, I generally put in less flour and milk, but use the other ingredients as stated.”)

Did the queen intentionally send the president a mostly-directionless recipe to prevent him from replicating her treat? Would he, as a midcentury cooking enthusiast, have been able to intuit the instructions? Did Dwight Eisenhower enjoy the taste of slightly metallic, burnt floppy pancakes? Did he request the recipe out of mere politeness — or, perhaps, as a scheme to acquire an item penned in the queen’s handwriting for his personal recipe collection? The Archives do not contain such information.

But they do offer something useful: the urge to learn more.