Home » Fashion » The One-Night Stand That Went on Forever

The One-Night Stand That Went on Forever 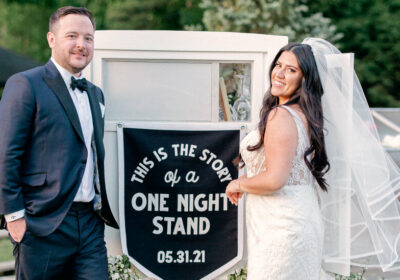 It was supposed to be just a one-night stand. Instead, Karina Lopez, 33, and Curtis Rogers, 35, have been together for 12 years and even own three businesses together now, all based in Manhattan and Buffalo, N.Y. — KC Public Relations; KC You There, a wedding planning and design company; and Minibar Mobile.

The two met in June 2009 at a farewell party that Ms. Lopez was hosting at her apartment after her graduation from the University at Buffalo. Mr. Rogers was crashing the party. The next night they met up for what was supposed to be a “casual” hookup that ended up lasting for four days. “We saw each other every second we could,” Ms. Lopez said.

It was Memorial Day weekend 2019, during a birthday dinner for Mr. Rogers at Sugarcane Raw Bar Grill in Brooklyn. “I thanked everyone for coming to my birthday and our engagement weekend,” Mr. Rogers said. Before Ms. Lopez could react to his joke, Mr. Rogers pulled out an engagement ring and asked Ms. Lopez to marry him.

The pandemic put the kibosh on their first planned wedding weekend — July 31 to Aug. 2, 2020. So they rescheduled their retreat-style wedding for this year, May 30 to June 1, at their original location, Cedar Lakes Estate, formerly a camp in Port Jervis, N.Y.

Wedding guests traveled from various places, some as far as Puerto Rico, Texas and California, to gather for the weekend celebration. It began with a margarita-style welcome drink the couple called the “Fifi-rita,” named after their teacup poodle, Fifi.

Their welcome party included a pig roast, “for which my mother, Maritza, found it necessary to deliver her seasoning a few weeks prior to be used on the pig,” Ms. Lopez said. After the Southern-inspired dinner, guests danced until late into the evening.

The day of the wedding, May 31, guests spent the afternoon enjoying the beer garden and swimming in the pool and in the lake before it was time for the main event.

For the ceremony, Ms. Lopez wore a gown from the Australian designer Martina Liana and carried a bouquet of lilies of the valley. Mr. Rogers wore a custom tuxedo from Tom Barnett that bore a monogram of the couple’s initials. The couple were married lakeside at 6 p.m. by their longtime friend Chris Kozlowski, who was ordained by the Universal Life Church for the event. “It was magical,” Ms. Lopez said. “The sun was literally glistening off the water and the rays were seeping through the trees.”

To pay homage to their lengthy one-night stand that turned into a lifelong commitment, Ms. Lopez surprised Mr. Rogers with a custom flag to hang on the mobile minibar and later at home. “This is the story of a one-night stand,” the flag read.

Guests later enjoyed what seemed like a concert at the reception by the band Sound House by Elan Artists, with four lead singers, three horns, keyboard, guitar, bass, drums and Latin percussion. “They truly made the entire reception,” Ms. Lopez said.

The next morning, guests gathered for a farewell brunch. “Our friends and family asked, ‘Are we going to have a one-year-anniversary party here?’” Ms. Lopez said.