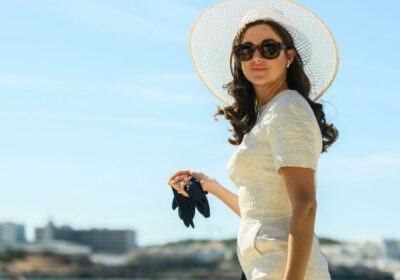 From bright, bold glamour set against the azure blue of the French Riviera to moody jewel-tones among the grey skies of London, The Last Letter From Your Lover serves fashion and feelings in abundance.

Warning: spoilers ahead for The Last Letter From Your Lover

It had been a while since I had been to the cinema, almost two years in fact. Lured in by this summer’s most-anticipated romantic drama – an adaptation of Jojo Moyes’ bestselling book, The Last Letter From Your Lover – I found myself in a plush velvet seat, phone off, lights down and ready to submerge myself in someone else’s story.

The story follows London journalist Ellie (Felicity Jones), who stumbles on a series of letters and unravels a secret romance from the 60s between society wife Jennifer Stirling (Shailene Woodley) and reporter Anthony O’Hare (Callum Turner). The film is a series of pieced-together flashbacks, that runs parallel to a modern love story, a classic will-they-won’t-they romantic suspense (I couldn’t possibly tell you the outcome…), and while the narrative will have you hooked, the fashion makes you fall in love.

Jennifer Stirling’s wardrobe is a ray of sartorial sunshine

Felicity Jones put in a good case for a modern wardrobe through a series of studious herringbone jackets and wool berets but it’s Shailene Woodley’s decadent wardrobe that will have you pining to get dressed. With the swinging 60s as a backdrop and Woodley playing a very believable wealthy housewife, costume designer Anna Robbins (who also handles Downton Abbey) showers us in refined decadence.

Felicity Jones makes a case for a beret.

The film opens in a dreary looking London as Woodley’s character, Jennifer Stirling, tries to comprehend her memory loss, and the sombre nature of the scenes are reflected in monochromatic looks – modest, un-noteworthy (other than the fact they are pristine) skirts with matching jackets. It’s not until one of Jennifer’s flashbacks takes us to the south of France (and introduces us to the dashing O’Hare) that the fashion starts to really sing (and makes you desperate for a sun-soaked holiday).

Shailene Woodley and Callum Turner embark on a sun-soaked stroll.

A sunshine yellow dress with shell detailing (impossible to find anywhere now but in vintage stores) is Jennifer’s look of choice as she relaxes on a sailing boat; generously wide white hats make up her lounging by the pool attire alongside sweet pink dresses that could easily see you through the summer season now.

We’ll take the wardrobe and the boat.

In France, Jennifer’s colour palette is bright and assertive; playful and tempting at the same time – reflecting her relationship with O’Hare. In comparison, as the timeline skips between Jennifer’s memories, so do the clothes. Dark, rich jewel tones dominate her London looks and so her mood as she struggles with her affair and life-changing decisions.

Anna Robbins works her magic with this look straight out of the 60s.

When so much of our time has been spent in elasticated waistbands and dull colours, Jennifer’s wardrobe was the get up and go I needed to get dressed. To revel in the mood-altering abilities of clothes, particularly ones that feel so far removed from what we have been living in. There is a purpose to Jennifer’s wardrobe; not just the clothes of a rich woman, they are an extension of her character, a way of narrating her own life as more than just a wife. Ultimately, this is a feel-good film, but it is also an escape and we could all do with one of those right now.

Watch The Last Letter From Your Lover in cinemas from 6 August.