Home » Fashion » The best boots and coat to choose for winter

The best boots and coat to choose for winter One of the country's top stylists has some timely advice for choosing a coat and boots this winter: think '80s on your shoulders and '70s on your feet.

Kimberly Gardner, who styled Monday's David Jones runway at the Virgin Australia Melbourne Fashion Festival, said choosing a coat this season is as simple as going for a double-breasted style. 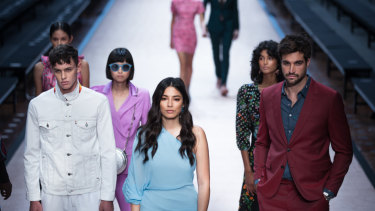 If you buy one thing … model Jessica Gomes (centre) leads the line-up at rehearsals for the David Jones show at VAMFF on Monday.Credit:Simon Schluter

"The shapes are more oversized," she said. "Before we would have had a more restricted silhouette – you also see that with the suiting – it's more '80s-inspired, bigger shoulders, looser pants, more pleating, higher waist, more forgiving."

That will be music to the ears of lovers of hygge and hot chocolate, who like their winter coats a little more roomy. Ditto the hot boot of the season, which Gardner says is knee-high, block-heeled and built for comfort and style. 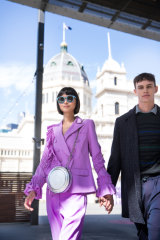 Models Cynthia Wu and Zane Doherty at the launch of the VAMFF Plaza precinct at Carlton Gardens on Monday.Credit:Simon Schluter

At the Gorman runway on Sunday, boots were two-toned in blue and camel, while in Paris, the autumn-winter '19 collections have also included floral print boots (Valentino) as well as primary colours (Elie Saab) and a slouchy style with gold ankle detailing (Celine).

While David Jones showed a large swath of its winter collection at a two-day event for media and celebrities last month, Gardner said she took a slightly different approach to styling the consumer-focused show for VAMFF.

"For the consumer audience, we do more of mixing the high and low and brands," she said. "They [customers] don't necessarily have to buy the whole outfit."

Gardner said the trend of clashing prints was one of her favourites of the season, as well as the continuing dominance of animal print.

"I find it surprising that animal is back, but it's a different feel [to past seasons]," she said.

The David Jones parade featured ambassador Jessica Gomes and a musical performance by Owl Eyes. One of the festival's biggest drawcards, international curvy supermodel Ashley Graham, will walk in a soldout runway show on Thursday.