After a couple of years of working as an agent at a modelling agency I had begun to feel much more comfortable with my body. Watching what all these beautiful, young women were doing to themselves to work in our industry made me feel better about choosing the steak and red wine. I wasn't going to put myself through those kinds of horrors just so that I could fit into a certain dress size. 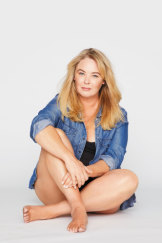 “The idea was to cover as
much of our bodies as possible. We
were draped in massive shirts and
baggy pants. God forbid anyone saw
a womanly curve or a waistline.”Credit: Michelle Holden/Courtesy of Murdoch Books

Although I was beginning to feel more content in my own skin, I was having a tough time finding fashion that fitted me and made me feel good. I had noticed a couple of ads for plus-size women's clothing in magazines and I would ask myself why the plus-size women were always depicted in their mid-30s, with conservative brunette hairstyles. Where were the models who were my age? Where were the cool, young women in their 20s?

I was desperate for fashion options, but I couldn't find myself represented in any of the ads for the clothes that would fit me. I was young, fun and on trend, not a mum with three kids. There had to be other young women who loved fashion and wanted to look and feel good in their clothes.

I had an idea. I went to my boss, Greg, and asked him to cut me a new deal. I was going to get some pictures taken for a model portfolio and I wanted the fashion desk to represent me as a plus-size model. If I booked any jobs, he could take those days out of my holiday leave. To my delight, Greg agreed to go along with my plan.

My parents, model Nola Clark and actor Tony Bonner, were friends with Australian media and fashion icon Maggie Tabberer. Maggie ran a fashion label, Maggie T, for women size 12 and over, which made her the perfect first port of call for my fledgling concept. Maggie was brilliant and immediately agreed to let me have my choice of outfits from her range.

I put everything I had into that first photo shoot. There was no digital photography back then, so starting a portfolio was an expensive undertaking. It cost me the equivalent of more than six weeks' wages to set everything up.

I asked one of our wonderful agency photographers, Andy Tavares, to shoot me. Andy's wife Kim, a hair and make-up artist and a curvy woman herself, thought it was a fantastic project, so she jumped on board.

I had studied the handful of models who worked in the field and because most of the models I'd seen had brown hair I dyed my hair brown as well, so I didn't look too different.

On the day of the shoot, I felt weirdly excited. We were going to do it just like any other model's portfolio. It wasn't about being a plus-size model: it was about being a model.

We shot in Andy's studio, where the light was perfect, and we blasted the sound system to set the mood. Both Andy and Kim treated me with the utmost respect and professionalism. They made me feel so beautiful. I'll be indebted to them both forever for that experience and I still treasure the photos we took that day.

As soon as my portfolio was ready, Greg began sending out the images to anyone and everyone he could think of who might be looking to use a plus-size model. I started booking work almost immediately.

One of my first call-outs was for a collection of stores called Chain Reaction. The owner, Maria, could see that there was a gap in the market and she really believed in a younger look, so she booked me straight away.

There were teething issues; like the time the clothing samples we were sent for the shoot were the wrong size, so we had to cut the dress right up the back and hold it together with gaffer tape. But I didn't care who I flashed my bum to: I knew from my parents that you did whatever had to be done to get the shot.

It wasn't long before I felt confident enough to change my hair back to its natural blonde and cut it into a short, modern style. One of my favourite clients, Robyn from My Size, loved my edgy look and booked me for a shoot straight away.

I remember that shoot distinctly because the photographer wanted me to sit in the second-floor window of a broken-down old barn. This might not sound so bad, except that the barn was full of spiders and rats and the only way I could get to the window was to climb a dusty old ladder.

I have two great fears in life: spiders and heights. So, while it might not seem to some like too much of a big deal to sit in a second-floor barn window and dangle my legs off the edge looking serene and happy, it took all my strength and will power not to scream and flail about swatting at spider webs. When I look at the photos today I can't believe I look so calm when inside I was terrified.

Over the next year, modelling took me all over the country. I was booked for all the major runway shows, which was a lot of fun, not least because Mum and my sister Skye were also booked for the same gigs. In those days, we only used first names as models and I can remember Skye and me being told off by a producer at one of the shows for calling Mum, "Mum".

She thought we were being rude and ageist because Mum was the oldest model on tour; she didn't realise we were related and that she actually was our mother. I still love telling that story.

It was at about this time I felt like I had to decide between being an agent or being a model. It wasn't an easy decision to make because I loved my job as an agent; however, I knew that opportunities like the ones I was being given didn't come around very often.

I chose to leave the agency. I took with me a wealth of knowledge about the industry and some great friendships. The people I had worked with at Greg's agency were great teachers and I still find myself using what I learnt there with the staff in my own agency, 20 years later.

The next year of my life was a lot of fun. I was modelling a great deal, but I also made sure to have a part-time job. I'd seen my parents, and many models, live from shoot to shoot and I couldn't cope with that kind of financial uncertainty.

I always wanted to make sure my rent was covered and my bills were paid.

I worked in women's fashion stores on weekends and in the evenings and any days I wasn't booked to shoot. I would put my hand up for all the shifts other staff didn't want, like public holidays, Christmas and Easter.

When I began modelling there were a few other size 14 and 16 models coming through and I often found myself on set with the same women.

In the shots that required two models, known as double shots, it was me, "the blonde", and either Bec or Alice, "the brunette". Both Bec and Alice were popular with clients and would often be flown to Melbourne from Sydney for the shoots. We became great friends.

Over time, we all noticed during our shoots how much better we looked in our own clothes than when we were made up on set. As plus-size models, the clothes we were usually asked to wear were shapeless and boring.

We laughed about it, but in truth it was laugh or cry. We didn't feel like we were properly represented at all. We'd sit down in hair and make-up and watch the "straight-size" models get made up to look fresh and glamorous while we would be transformed into conservative, middle-aged women. The idea was to cover as much of our bodies as possible. We were draped in massive shirts and baggy pants. God forbid anyone saw a womanly curve or a waistline.

Even skivvies, which are made to be fitted, were given to us four sizes too big. The aim was to make our faces the focal point.

I was enormously bothered by being a part of an industry that was telling women they should cover their bodies if they were larger than a certain shape, but I also thought that it was important that we were out there – at least we were being represented in some way, which had to be better than not being represented at all.

It was a catch-22. I didn't think I was in any position to change the way things were: I was just the model, I had no power, and I hated that feeling most of all.

This article appears in Sunday Life magazine within the Sun-Herald and the Sunday Age on sale February 17.